This article is over 7 years, 4 months old
The anti poll tax riot in 1990 helped oust Margaret Thatcher. The movement also struck a blow against everyone who said it was impossible to fight back, argues Sadie Robinson
Downloading PDF. Please wait...
Tuesday 31 March 2015

Twenty five years ago a riot rocked Britain that would become the first nail in the coffin for hated Tory prime minister Margaret Thatcher.

The 200,000-strong anti poll tax demonstration in London on 31 March 1990 was a huge show of opposition to Thatcher’s hated tax. The tax would snatch the same amount of money from everyone—regardless of wealth. Millions of ordinary people were rightly furious.

Mainstream newspapers and politicians condemned the riot, blaming it on anarchists and revolutionaries. In reality, police provoked the riot—and protesters were absolutely right to fight back.

The movement against the poll tax was a mass movement. This was its strength. The tax was first introduced in Scotland in 1989, triggering a non-payment campaign involving millions.

The demonstration on 31 March followed months of working class people organising in towns and cities across Britain. It set off from Kennington Park in south London at 1pm and headed for Trafalgar Square. Many people who had never been on a protest before joined it.

As Trafalgar Square filled with protesters, a section of the march became stuck in Whitehall. Several hundred cops assembled there to stop marchers getting close to Downing Street. Protesters described riot cops lying in wait in adjoining streets ready to attack.

Without warning, 40 cops on horses rode through the crowd. Protesters scattered through back streets as they tried to get children and older people to safety. Police infuriated the crowd by arresting a disabled protester. Chants of “Hillsborough!” went up as people tried to stop police crushing them.

One marcher said, “I couldn’t believe it. Perhaps I’m naive but I didn’t think the police hit people without a reason. But they came for people who were doing nothing.”

Meanwhile, there was a carnival atmosphere among demonstrators in Trafalgar Square. People were hanging banners from scaffolding, dancing and cheering. Then police attacked.

They came from several entrances to the square, trapping some demonstrators between police in the square and riot cops on Whitehall. Thousands of demonstrators broke away and spilled into nearby streets.

One marcher said, “The police just went wild. When the police came in it was like a battleground.”

The cops kept charging protesters but failed to disperse them. They drove vans and a car at demonstrators at speed with no warning.

Ros Sare came across the protest by chance. “I saw this young girl, about 17, being held down by five policemen with her throat against the railings,” she said. “It was awful.”

A photograph of Ros was included in a newspaper supplement days after the protest. “It was captioned ‘A West End shopper argues with a protester’, but that’s not what happened at all,” she said.

“The truth is, I felt bloody angry that day.”

Dozens of demonstrators were injured after police hit them with truncheons. Mail on Sunday newspaper photographer Keith Parnell was one of them.

“I saw this policeman coming at me,” he said. “I heard him say, ‘You’ll do’ and then he hit me with his baton. I put my arm up and he hit my forearm, breaking it.

“The police had lost control.”

The Mail on Sunday newspaper blamed “anarchist gangs” for the violence. But people didn’t need anarchists or anyone else to tell them to be angry or to fight back. Their resistance wasn’t mindless. Protesters pelted the South African embassy with cans and sticks to show their anger at apartheid.

One demonstrator described the mood. “Lots of bystanders were very sympathetic to what was going on,” they said. “A BMW car was turned over and there was cheering.

“There wasn’t much looting—it was more everyone who had a grudge against the rich hitting out at the symbols of money.”

The riot released years of pent-up anger against Thatcher and the Tories.

People who had suffered police attacks during the 1984-85 Miners’ Strike or the 1986 Wapping dispute finally felt they were getting their own back.

And it was a blow to everyone, including the Labour Party, who had said it was impossible to fight back against Thatcher. The establishment rained hell on working class people after the riot. Campaigners and non-payers faced police raids and arrest.

The Sunday People newspaper printed images of protesters with the headline “If you know ’em, SHOP ’EM”. Newspapers complained that “bloody mob rule” had taken over London.

Even some socialists involved in the anti poll tax movement condemned protesters. Yet this failed to quell the resistance.

In the weeks after the riot some council workers struck and refused to collect the tax. Protests continued to attract thousands in towns and cities across Britain. By June a third of people in England and Wales hadn’t paid the tax.

And when people were hauled through the courts to try and wrench the money from them, angry crowds of protesters besieged the hearings. Thousands of ordinary people conducted their own court defences, or defended other campaigners.

People stopped bailiffs seizing the belongings of non-payers. The poll tax was a disaster for Thatcher. On 22 November she finally resigned.

Today the memory of the anti poll tax movement is a warning to our rulers.

The riot marked a day when people refused to be pushed around and stood up to the state. Many ordinary people know that they helped get rid of Thatcher—and that’s something to be proud of.

Riots—cry of rage against repression

Our rulers claim riots don’t fit the “British” way of doing things. But Britain’s history is full of them and far from involving a minority bent on “mindless violence”, many have high levels of organisation and enjoy widespread support.

Thousands of peasants terrified the establishment by joining the 1381 Peasants’ Revolt. It began after King Edward II imposed “poll taxes” that hit poor people the hardest. Rebels targeted people closely connected to the courts and royals. They ransacked the homes of the rich and burnt tax records.

Historian Edward Vallance wrote, “This was not indiscriminate carnage. The violence was highly organised and it symbolised the transformation of society that they sought to effect.”

The Luddites, poor weavers who smashed up knitting frames that were putting them out of work in the early 19th century, were also highly organised. They drilled military-style in fields in the dead of night. Armed Luddite units launched highly organised assaults on bosses’ homes.

Our rulers proclaim horror at poor people’s violence. But it’s nothing compared to the state. Protesters killed seven people in riots between 1736 and 1848. State forces killed 609 people putting down protests.

And riots are often a response to state repression. In 1866 a government ban on a Reform League meeting sparked three days of rioting.

Police racism sparked riots during the 1980s, including in Bristol and in Brixton and Tottenham in London. The most recent riots followed the police killing of Mark Duggan in 2011. Riots occur when ordinary people refuse to accept “their place”. For our rulers, this is their real crime.

Socialists support anyone who fights back against the system. And riots have won important concessions. To win more we need to challenge the system as a whole with mass working class resistance. 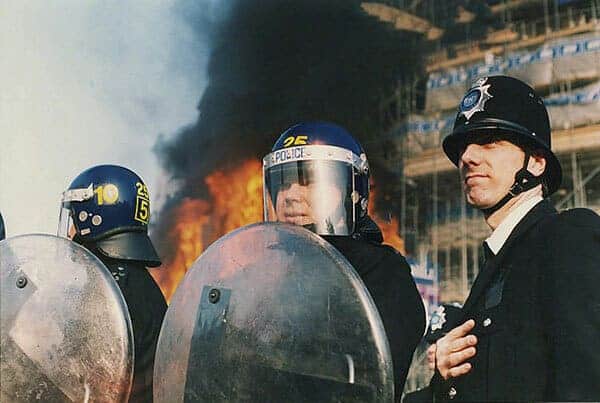