This article is over 14 years, 0 months old
In the last part of our series on Radical America Megan Trudell looks at how US workers reacted to the Great Depression
Downloading PDF. Please wait...
Tuesday 12 August 2008

The Great Depression of the 1930s dealt an incredible blow to US capitalism. Industrial production fell dramatically. By 1932, one quarter of the US workforce was unemployed.

Over 300,000 farm workers migrated as small banks collapsed and farms were repossessed. Millions of Americans were thrown into poverty and destitution.

The slump panicked the ruling class. Some called for state intervention in the economy, arguing for reforms and government spending to solve the crisis.

Franklin D Roosevelt was elected US president in 1932 in coalition with those business interests. He promised a “New Deal” to tackle the crisis.

These reforms were important, but their aim was to save US capitalism. Roosevelt called himself “the best friend the profit system ever had”.

The New Deal measures were partly put in place to attract workers’ votes. But they were also a response to a new and combative workers’ movement.

Despite economic hardship, workers fought back. The 1930s saw a series of dramatic revolts. In 1934, three massive strikes – Toledo car workers, truckers in Minneapolis and San Francisco dockers – saw workers organised across craft and industry, united against their employers.

The strikes’ militancy won union recognition and collective bargaining rights. Socialists were central to the organisation of all three strikes.

The lesson that a different kind of politics could win was a powerful one that led to the formation of the Congress of Industrial Organisations (CIO), which split in 1936 from the American Federation of Labour (AFL).

The CIO leadership was bureaucratic, but its birth was a great victory for the US working class. It became a mass organisation through huge and militant strikes.

In 1936 workers at a General Motors (GM) plant in Cleveland occupied their factory, igniting a wave of occupations known as “sit‑down strikes”.

There were 477 sit‑down strikes in 1937 involving over half a million workers. The struggle built the unions – and quickly. By 1941 nearly a third of the US workforce was unionised.

The upsurge in struggle also led to calls from union militants for a political party to represent workers. But this momentum for a labour party was halted by the AFL leadership and the Communist Party (CP).

The AFL leadership refused to support any electoral candidate sympathetic to the CIO.

The CP was a significant force in the CIO. But its politics were dictated by the needs of Russian foreign policy. Stalin’s “popular front” strategy at the time led Communist parties around the world to ally with “progressive capitalists”. In the US this meant support for the Democratic Party.

The CP used its influence to call for votes for Roosevelt in 1936 and to deflect calls for an independent labour party.

The CIO agreed to moderate its tactics in return for protection from the Democrats. But in 1938, when steel workers in Democrat-run Chicago were massacred, Roosevelt attacked the strikers.

The steel strike was lost, and the movement ebbed. And at the very moment that Roosevelt betrayed the workers who voted for him, the CIO bureaucracy kept its side of the bargain and rejected militancy.

The strikes of the 1930s were nevertheless a high point in US working class history. Enduring union organisation was forged in just a few years. Vast numbers of workers were radicalised.

There has been a strong tradition of resistance in the US. At the hardest times, huge battles have challenged the US ruling class and won important gains for workers.

Today that history brings hope – but also a warning. Time and again spontaneous struggles have erupted that challenged the status quo and created new workers’ organisations.

Yet those struggles have repeatedly been channelled into support for the Democrats by union leaders. Nonetheless the potential remains for outbursts of struggle in the US to overcome workers’ divisions and create organisations that build upon new forces. 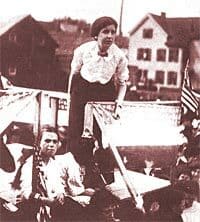 The 1920s were a decade of defeat for working people