This article is over 15 years, 4 months old
Socialist Worker journalist Simon Assaf and photographer Guy Smallman were among the first to reach the border town of Aita al-Shaab after the Israelis withdrew. They spoke to fighters and locals about their month long battle to defend the town.
Downloading PDF. Please wait...
Saturday 26 August 2006

The road to Aita al-Shaab is littered with victims of the brutal power of Israeli military might. For mile after mile, houses are in ruins and the sides of the roads are littered with wrecked cars, many hit by rockets or strafed by helicopter gunships.

We joined a convoy from the Samidoun solidarity network as they were attempting to get supplies to the desperate border villages.

The road south was deserted as our convoy negotiated burnt out petrol stations, collapsed houses, roads punctured by craters and strewn with twisted metal and glass. We saw the effects of bombs powerful enough to suck the shutters off shop fronts and shatter windows for miles around.

Aita al-Shaab had endured weeks of savage fighting. Israel claimed that it had killed dozens of fighters in the town and that it had broken the back of Hizbollah in the area.

But as we entered the village we were met by the resistance patrols with two-way radios. They were firmly in control. On every street corner we saw men, some of them wounded, keeping a close eye on the town. Locals offered us bottles of mineral water left behind by retreating Israeli troops, while others offered us apples and cups of coffee.

Aita al-Shaab is a small farming town and home to some 10,000 people. It is spread over three hills and surrounded by tobacco fields. One mile to the south the land rises to form a steep ridge – this is the border with Israel.

The Israelis claim it was a Hizbollah unit from the village that captured two of its soldiers at the outset of this war.

We spoke to the local mayor. Over 80 percent of the town had been destroyed in a relentless barrage of rockets, shells and air strikes, he said. The water pumping system was knocked out, the school, mosques and hundreds of homes were punctured by shells. Electric cables and telephone lines were cut, while the surrounding fields were littered with unexploded mortar rounds and artillery shells. Houses had collapsed everywhere, with family photos, crockery and toys blown into the street.

A grey dust covered everything. Shops were burnt out, cars lay on their side as if flipped by a giant hand. Some families returned to find their homes littered with unexploded bombs, and turned back to find refuge in the southern city of Tyre.

The southern villages of Lebanon were at the heart of the resistance to the Israeli army, and pacifying Aita al-Shaab was a top military priority for the Israelis. Hundreds of Israeli troops poured over the border and seized a school for the blind overlooking the town, while helicopters dropped other troops behind the town.

The majority of civilians fled to a nearby Christian town, where they were given refuge. Others hid in cellars or in their homes.

Over the next month the village fought off three major assaults by the Israeli army. The battle for Aita al-Shaab would reflect the pattern of resistance across the south.

From the outset of the war, Hizbollah’s ranks were swelled by a mass of former fighters. For some this was their third war – they had first picked up a weapon in the 1960s. The Israelis found themselves fighting the veterans of the 1982 invasion, and the 1993 and 1996 assaults. The vast majority of the fighters were locals, backed by highly trained and well armed guerrillas drawn from across the country.

Across the south the Israelis discovered that instead of facing a few thousand Hizbollah fighters, they were confronted by tens of thousands of armed men.

This was a popular resistance organised in cooperation with Hizbollah or under its leadership. Locals defended villages, freeing up Hizbollah fighters to take the offensive against the invading Israeli troops.

As other Lebanese organisations declared for the resistance, Hizbollah was able to draw on resources well beyond their ranks. In Aita al-Shaab this combination would survive a month long siege by the world’s fifth most powerful army.

We spoke to two local men, Ahmed and Ali. Ahmed described himself as a member of a left wing party, while Ali told us not to ask which party he belonged to. They would talk only on the condition that we did not ask their real names or take their pictures.

They described the battle for Aita al-Shaab as a “desperate” struggle. “On the first day the Israelis seized the school,” said Ali, pointing to a large white building overlooking the town.

“Others were dropped behind us. Our fighters fired anti-tank weapons at them, while other units pulled back into the village. We believe many Israeli soldiers died in that first battle near the school – we could hear the cries of their wounded.”

The Israelis admitted that several soldiers, including an officer, were killed in the first days of the fighting. Dozens of others were wounded. Aita al-Shaab would prove to be the most costly battle for the Israelis. Resistance fighters in surrounding hills pinned the Israelis down using modern wire-guided anti-tank weapons, before slipping back into bunkers and trenches.

“In the second attack, the Israelis advanced across the tobacco fields and seized the bottom of the village,” Ali continued. “They wanted to fight their way up the main street into the neighbourhoods on the hill – if they succeeded they would have split our town in two.”

Here locals held them off, firing out of windows, shop fronts and doorways. The buildings along the central street are punctured by thousands of bullet holes, rockets and heavy machine gun fire.

“We would hold a house until the Israelis called in an air strike – we realised that they always pulled their troops back first, so we knew when it was time to set up new positions. Often their soldiers would seize a street, only for our fighters to appear behind them.”

“It was in this battle that we had our first martyr,” said Ali, pointing to a house blackened by fire.

The Israelis advanced half way up the main road before abandoning their assault. Volleys of rockets and shells then lashed the houses, crushing walls, slicing off the tops of trees and gouging holes in the road. The fighters would disappear into cellars and bunkers, only to re-emerge later.

Then the Israelis launched a full-scale assault, targeting the high ground behind the centre of the village. Ahmed described the fighting that took pace in an area nicknamed “Moscow Square” by locals because of its historic ties to the Lebanese Communist Party.

“During the final assault, the Hizbollah fighters took up positions around the community centre while we attempted to tie down the Israelis around Moscow Square. We ducked from house to house, firing then changing position,” he said.

“For us it was a last stand – we feared they would trap us in a few houses and then call in bombs on us. We were in a desperate position, but it was Hizbollah who faced the toughest battle. Israeli paratroopers supported by tanks and armoured bulldozers launched a full frontal attack on them.”

“The Israelis would advance as the bulldozers crushed houses in front of them. They reached within 20 metres of the community centre,” said Ali. But a rocket team was able to destroy some of the bulldozers.

The Israelis called up reinforcements, but as their tanks made the dash across open fields they were ambushed by other fighters. One tank was destroyed and several others knocked out. “After they saw their tanks destroyed they withdrew,” Ali said. “Thanks to god, we had won.”

I asked if there was any truth to the Israeli claim that over 50 resistance fighters had been killed in the area. He took me to a wake where we met a group of fighters, some of them wounded, drinking coffee. They all agreed that only eight local fighters had died, and pointed to a small trench that was being dug for graves. There was room for 14 graves – eight for fighters and six for civilians.

“The Israelis lost the battle because we all became the resistance,” said Ahmed. “The left, the Arab nationalists and the locals all worked under the leadership of Hizbollah for the defence of our town.”

With the town in ruins and this year’s crop lost, Aita al-Shaab faces a desperate struggle to rebuild before the winter. On the ridge a plume of dust was thrown up by an Israeli patrol, while observation towers continue to peer into the town. On the way out, we ran into UN units heading towards the town, while the Lebanese army were beginning to set up checkpoints.

The battle of Aita al-Shaab was a victory for the resistance. But another difficult struggle is about to begin. 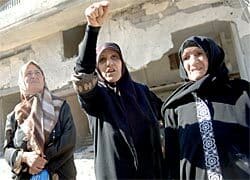 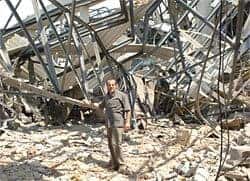 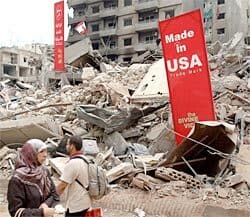 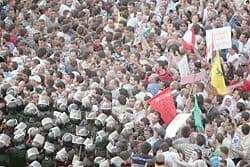 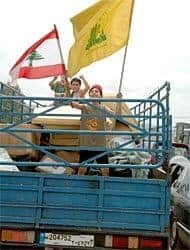