The battle of Wapping

For more than a year police battered workers fighting for their rights, while the full force of the media and the government was used against those battling for justice. That was what happened 25 years ago when press baron Rupert Murdoch sacked 6,000 print workers.

He moved their work to a scab plant in Wapping, east London, where strike-breakers produced News International’s newspapers—the Sun, the Times and the News of the World.

Outside the plant, the police beat a path through pickets for lorries operated by scab firm TNT to get the papers out.

Starting on 24 January 1986, the printers and their supporters defied the government, Murdoch and the police. But in the end, they lost.

This was not inevitable. The real tragedy is that the strike could and should have won.

It is often claimed that the unions were a block to the introduction of new technology in the print industry, and so they had to be beaten. But for the government the Wapping dispute was about increasing the power of big business over workers.

The Tories came to power in 1979 determined to do this by reducing the strength of the unions. The defeat of the miners in 1984-5 was crucial to their plan and the assault on the print workers was the next stage.

Murdoch was, and is, the Tories’ favourite media mogul who they are willing to help in any way necessary. Disgracefully, New Labour had the same attitude towards him.

The printers were powerful, with a proud record of supporting other workers’ struggles—they had raised over £1 million for the miners the year before and walked out in their support.

Granville Richardson, president of Silverwood NUM, said at the time, “When the Sun called the Silverwood miners ‘the Scum of the Earth’, the printers put their necks on the block for us… They stopped the presses. Fleet Street fed and clothed the miners. We should do everything possible to build solidarity around the printers.”

This was a common sentiment but the union leaders failed to use it.

The printers, clerical and support workers, fought bravely against all the odds. They faced the constant threat of arrest and police violence on picket lines. Week after week, the police would beat pickets with truncheons, or charge into them on horseback.

Wapping was frequently locked down, with the roads closed to ­everyone except the scab lorries. The strikers never managed to shut down the plant for even a day—thousands of riot police were on hand to repel them.

Murdoch later spelled out the key to his victory: “The police would not let the picketers block our trucks.”

The Tories unleashed the full force of the state against the printers. But the trade union leaders repeatedly failed to call the all-out strike on Fleet Street, where all the papers were produced, that could have won. Instead they let the strikers down, and some were instrumental in betraying them.

Electricians in the EEPTU union organised Murdoch’s new workforce (see box). The TUC refused to expel the EEPTU despite its blatant scabbing.

Many “refusenik” journalists in the NUJ union refused to relocate to Wapping and lost their jobs. But others, including some union members, crossed the picket lines in specially reinforced coaches. The union did not expel them.

And the Labour Party denounced the “violence” of the pickets, just as it had smeared the miners the year before.

Most disastrous, though, was the way the printers were sold out by their own union leaders.

The defeat of the 1984-5 Miners’ Strike had boosted right wingers’ confidence to push the idea that workers could not win through militancy.

This also had the effect of reducing the confidence of those within the labour movement who wanted to show solidarity.

Most union leaders argued that being “moderate” to win “public support” was the most important thing—anything else would jeopardise Labour’s chances of winning the next election.

These tactics, born of defeat, came to be known as “new realism”—and ultimately became a self-fulfilling prophecy.

About halfway through the strike, Brenda Dean, the leader of the strikers’ Sogat union, told its annual conference: “We owe it to ourselves, to our families and to Britain as a nation to return a Labour government.”

“That above all must be our priority,” she added. “We must not allow anything to come in the way of that.”

After union members voted to reject one of Dean’s many attempts at a deal, striking Sogat member Tony Wolfarth said, “We had the vote to continue fighting, and now we’re waiting for the next sell-out. She’s gradually strangling the thing to death.”

Murdoch knew it too. He boasted, “So long as Brenda Dean is in charge, I think things will be fairly peaceful.”

Tony Dubbins, leader of the other striking union, the NGA, was little better. “We are in this dispute to get the sympathy of the public,” he insisted—and “violent” picketing wasn’t helping.

He argued for the unions to throw all their energy into a boycott campaign, calling on the public not to buy Murdoch papers.

Despite revelations about Murdoch’s plans for the Wapping plant (see below), the union leaders had also held off from striking until the last moment.

Two days before the strike, BT engineers who were to install the phone lines at the Wapping plant pledged not to cross any picket line—and then begged the print unions to put one up. But the leaders refused.

Once the strike was on, they held back mass pickets, fearful that the Tories would use the anti-union laws to seize the unions’ funds.

The heads of the unions finally called the strike off in February 1987. They had not only handed Murdoch victory over the printers, but saved him enough money to fund the building of his right wing media empire.

Today the government’s attitude to the News of the World’s phone hacking and Murdoch’s takeover of Sky show the power he still wields. This was power handed to him by Thatcher’s regime.

The lesson of Wapping is not that people like Murdoch are invincible—it is that if we’re going to beat them, we have to fight on an even bigger scale.

All out strike was way to win

Mary Brodbin worked as a copytaker on the Evening Standard in Fleet Street at the time of the strike.

“Like everyone else in those days, I had to get my job from the Sogat union office,” she remembers.

“You couldn’t just go to a newspaper and say ‘got any jobs?’ That was how strong the print unions were at the time.

“Some people at my work thought the printers ‘had it coming’—that they’d taken things too far. That feeling was fostered by the papers.

“The truth, though, was that breaking the printers meant hell was coming for all of us.

“I was down on the picket lines every weekend.

“They fought all the way. But what we needed to win was an all‑out strike on Fleet Street—and the union had the power to do that.

“But Brenda Dean argued that the rest of us shouldn’t come out in support because that would mean the only papers to buy would be Murdoch’s papers.

“They just wanted to cool things down and negotiate. Strikes should not be left in the hands of the union leadership.” 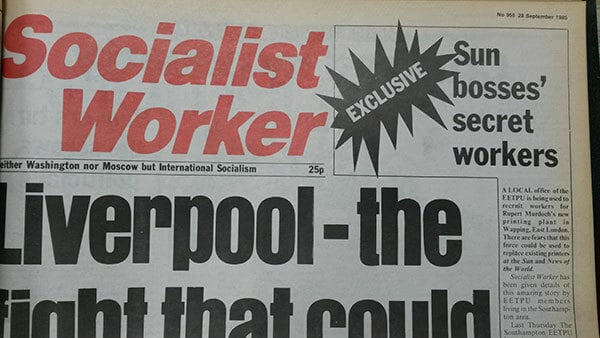