This article is over 5 years, 3 months old
The march of Oswald Mosley’s British Union of Fascists was halted on 4 October 1936 by a working class revolt in east London. Alistair Farrow looks at what we can learn from anti-fascists who recall the mobilisation
Downloading PDF. Please wait...
Tuesday 27 September 2016

Eighty years ago this week tens of thousands of working class people stopped the British Union of Fascists (BUF) marching through Cable Street in east London.

They were up against the full force of the police who were determined to let the fascists march. But their mass mobilisation fought off repeated attempts by mounted police to force a route through the crowd.

Jack Dash was a member of the Communist Party. As part of a number of interviews held at the Jewish Museum in London, he described the scene. “There was one huge block of solid flesh that was determined that the BUF would not enter officially into the East End of London,” he said.

“We presented ourselves as a great huge block on every turning, linking up in arms, to stop the entrance into the East End of London.”

At the beginning of the Battle of Cable Street on 4 October, people congregated in Whitechapel from 12 noon. The BUF were rallying further down the road, working themselves up for a fight by listening to marching bands and speeches from leading fascists.

Charlie Goodman said, “Cable Street at that time was a bit different to what it is today, much narrower. There were also lots of little sheds where the seamen kept various things, old lorries and that sort of thing.

“When we got there, we saw that the seamen had already opened the sheds and pulled out some old lorries and turned them on their sides. At the windows of the tenements, all the women were standing watching what was going on.”

Tram drivers had also stopped their trams in Aldgate, blocking off the BUF’s intended route alongside the crowds of anti-fascists.

Peter Platts observed events at the top of Cable Street. “I can remember seeing what I think was a Hillman open topped car coming down from Royal Mint Street,” he said.

As with fascist marches today, the police had attempted to clear a way for the fascists. Mounted police charged the crowds, but the mass of ordinary people stood their ground and blocked the cops.

Jack said, “The Cossacks came, the mounted police. We of the trade union movement with great experience of struggles… had armed ourselves with thousands of marbles in our pockets and so we threw them on the floor. 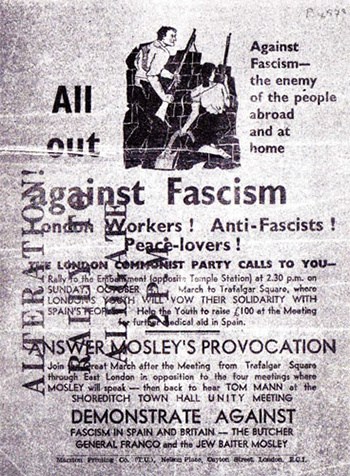 It was the mass mobilisation that meant people could fight off the police. “As the police made an attack on the barricades, the women just threw everything they had to hand, and I mean everything, down on the police,” Charlie said.

“The police ran into some of the sheds for cover, leaving us totally amazed.

“A little bit later on, the women came down and started banging and kicking the sheds, and to our amazement, the police came out with their hands up in surrender. Who’d ever seen a policeman surrender?”

The police were forced to disperse the fascists towards Hyde Park in central London.

The Battle of Cable Street saw a mass turnout because Communists and trade unionists had been organising for weeks ahead of the planned march.

Jack explained, “Everything was prepared the week previous … we whitewashed all the streets with the slogan, ‘They shall not pass’. This was to equate with the slogan being used during the Spanish civil war.”

The Battle of Cable Street took place as fascism was on the march across Europe.

The ruling class in many countries was turning to fascism to crush working class organisation and resistance. Only three years previously Adolf Hitler and the Nazis had taken power in Germany and smashed the left and working class opposition.

In Spain fascist forces under General Franco, backed by fascist Germany and Italy, were fighting a civil war against the Republican government.

“What was happening in Spain was paramount in the minds of the working class people of the East End as was the news of what was starting to happen to Jews in Germany,” said Charlie.

In Britain Oswald Mosley modelled the BUF on fascist parties from Europe and hoped to do the same as Hitler. Mosley was the BUF’s respectable face, but he was a Nazi through and through. Just two days after the Battle of Cable Street he was married in Nazi propaganda minister Joseph Goebbels’ home with Hitler as one of the guests.

His Blackshirt organisation was the street-fighting unit capable of breaking working class organisation.

The Blackshirts marched through Jewish areas chanting, “The Yids, the Yids, we’ve got to get rid of the Yids” and attacked working class meetings.

Ubby Cowan of the tailors’ union recalled, “The Blackshirts used to ride around in vans that … had thickened glass and wire mesh on the outside.

“Mosley started holding meetings in Duckett Street, which was off Mile End Road, and we used to go along to these meetings and protest.”

With the support of sections of the ruling class, they were on the verge of becoming a mass organisation. They were courted by the rich and powerful and Mosley appeared alongside leading establishment figures in the media and on the radio, lending him credibility.

Tatler magazine devoted a page to an interview with him. The Daily Mail newspaper ran headlines including the infamous, “Hurrah for the Blackshirts!”

Workers from east London travelled to Berlin in 1932, a year before Hitler seized power, to take part in a workers alternative to the Olympics. They saw how German society was on the brink of catastrophe.

Albert Booth recalled how a football match was attacked by Hitler’s Brownshirts. “They swooped down on the Berlin stadium where we were playing football,” he said. “They took off their belts and bashed the people unmercifully, and little or nothing was done.

“There was not a single arrest made of any Brownshirt that took part. The Communist Party were more anti-Social Democratic and concentrated much more on criticising the Social Democrats than they did really the fascists.

“The result that, because the working class movement was divided, the fascists were able to take advantage.” 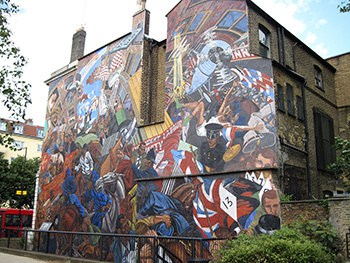 A mural to the Battle of Cable Street in east London (Pic: Flickr/jo-marshall )

But many members of the Communist Party and ordinary people in London rejected this approach and began to build a mass organisation capable of stopping the fascists in their tracks.

Appeals by Labour Party and Jewish People’s Council leaders to the home secretary to take action against the BUF were rejected.

These organisations then told their members to stay at home and ignore the fascists.

Jack said, “The leadership of the Labour Party, Herbert Morrison and the other leaders of the party was advising the members and the labour movement as a whole to ignore the demonstrations, to ignore the march and stay indoors.”

But the rise of fascism across Europe showed ordinary people that they could not let the march go ahead.

A protest of 150,000 had drowned out Mosley two years previously at Hyde Park, where he spoke to 2,500 fascists. But the trade union and Labour Party leadership had branded anti-fascists as hooligans then, so activists didn’t look to them for leadership in 1936.

Instead, they built support for the protest themselves. “We went round tackling all the shopkeepers in Whitechapel and they all chipped in,” said Ubby.

“We got a lot of money from them to pay for all the printing that had to be done, the hiring of loudspeaker vans and halls and all the rest of it.”

After their defeat at Cable Street the BUF continued to hold meetings, to organise and gained significant votes in the next year’s elections. But the Battle of Cable Street showed ordinary people that mass resistance had the potential to stop them.

When the BUF marched in Bermondsey a year after Cable Street, they were met again by mass anti-fascist protests.

The BUF’s defeat was drawn-out and hard-won by a mass working class movement. But, as Charlie said, “The 4 October was the experience of the fact that if people really believe that they can do a thing, they’ll do it.”

Interviews from the Jewish Museum’s archive. Go to jewishmuseum.org.uk 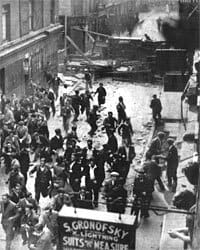