This article is over 14 years, 5 months old
The British army ceased active duty on the streets of Northern Ireland last week – 38 years after they first arrived in Belfast and Derry. This was called Operation Banner.
By Chris Bambery
Downloading PDF. Please wait...
Wednesday 08 August 2007

The British army ceased active duty on the streets of Northern Ireland last week – 38 years after they first arrived in Belfast and Derry. This was called Operation Banner.

The British media and military experts bragged how valuable lessons had been learnt in counter-insurgency and that the British army could show its US counterpart in Afghanistan and Iraq a thing or two.

Yet British troops were not sent into Northern Ireland in August 1969 to keep the peace.

James Callghan, then Labour home secretary, recorded troops were sent in because the armed police force could no longer contain an effective insurrection in Derry, the second largest city in Northern Ireland.

This had been provoked by a police invasion of Catholic areas.

The Labour government had to act to prop up a Unionist government which ran Northern Ireland as a sectarian, one party state.

At that time the IRA scarcely existed. But the actions of the British army turned that around.

In July 1970 the British imposed an illegal curfew on the Lower Falls Catholic area of Belfast.

They sealed the area off, saturated it with riot gas and shot four unarmed civilians dead.

It wasn’t until February 1971 that the IRA killed its first British soldier.

On 9 August 1971 the army swooped into Catholic areas at dawn dragging off 346 men to be interned without trial, often for years.

Few were IRA activists. No Loyalists were taken. Nine civilians were shot dead as rioting spread in response. By now the IRA was recruiting widely.

In its own analysis of operations in Northern Ireland the British army stresses it opposed internment and only acted under orders.

This did not stop the army secretly taking 12 men away and subjecting them to a grotesque experiment in “sensory deprivation techniques”.

The praise of Operation Banner skips over one key event – the Bloody Sunday killings of 30 January 1972 in Derry.

A month before, General Harry Tuzo, the army commander in Northern Ireland, told the then Tory government that, “A choice had to be made between accepting that Creggan and Bogside were areas where the army was not able to go, or to mount a major operation which would involve, at some stage, shooting at unarmed civilians.”

The government raised no objections. On 7 January 1972 General Robert Ford declared in a memo to Tuzo, “I am coming to the conclusion that the minimum force necessary is to shoot selected ringleaders among the Derry young hooligans after clear warnings have been issued.

“I am convinced that our duty to restore law and order requires us to consider this step.”

Accordingly, the paratroop regiment was sent to the city on the eve of a protest march against internment.

The paratroops were sent into the Bogside following a minor riot. They shot 14 unarmed protesters dead.

This was a massacre similar to ones British troops had committed around the world. Killings by the army would continue. In response, the IRA became the most effective guerilla movement of its day.

For much of the 1970s and 1980s the British policy was to use force to contain the Northern Ireland problem. Over time they became convinced they could not defeat the IRA.

Its leaders came to a similar conclusion, leading the way to the subsequent peace deal.

Having once labelled the IRA as “murderers” who they could never talk to, the British government was finally forced to negotiate. 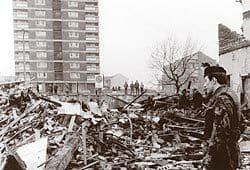 The inside story of British death squads in Northern Ireland