This article is over 16 years, 8 months old
The US 82nd Airborne Division was deployed to New Orleans last weekend, the first time it had been sent into an American city since the Los Angeles rising of April 1992.
By Alex Callinicos
Downloading PDF. Please wait...
Saturday 10 September 2005

The US 82nd Airborne Division was deployed to New Orleans last weekend, the first time it had been sent into an American city since the Los Angeles rising of April 1992.

The Los Angeles rising was also the last major event to reveal the stark divisions of race and class that structure US society. It came just after the US had emerged victorious from the Cold War and had proceeded to crush Iraq in the Gulf War of 1991.

The great explosion of anger by the poor of Los Angeles — black, white and Latino—exposed the failure of the first President George Bush to address the domestic ills of US society. It anticipated his defeat by Bill Clinton in the elections the same November.

Already in his second term, his son George W Bush can’t run for president again. But the political reaction to the devastation wreaked by Hurricane Katrina could yet reduce Bush junior to a lame duck.

“Natural” disasters frequently prove to have human causes — in this case the destruction of wetlands and the neglect of flood defences that laid New Orleans open to the hurricane’s worst.

But the aftermaths of such disasters always act as X-rays, brutally exposing the inner faults of the societies where they occur. Hurricane Katrina has done this particularly cruelly.

It has brought into the light of day — and onto the world’s TV screens — the vast pool of poverty and suffering, particularly among African-Americans, that is normally concealed in the depths of US society.

But Katrina has also thrown the most powerful state in the world into harsh relief. The economist Paul Krugman has been using his New York Times column to denounce “a can’t-do government that makes excuses instead of doing its job”.

It’s important to see that this isn’t just a matter of incompetence or negligence on the part of the Bush administration, but reflects its guiding ideology.

What unifies the Republican right that currently reigns in Washington is, among other things, a desire to reduce the functions of the state to what they were when William McKinley was president at the beginning of the 20th century and there was no income tax.

During his first term Bush forced through huge tax cuts that directly benefited the rich. Federal tax revenues have consequently fallen as a percentage of national income to their lowest levels since the early 1950s.

Combined with much higher military spending, the result is a record budget deficit — the federal government is spending far more than it receives in taxes. When Paul O’Neill, Bush’s former treasury secretary, protested about this he was slapped down by vice president Dick Cheney, who snarled, “Reagan proved deficits don’t matter.”

Bush’s main domestic aims in his second term are to abolish inheritance tax and to privatise social security — the federal pensions system — by handing it over to the tender mercies of Wall Street. Many people think that the Republican right’s game plan is to cut taxes so sharply that the resulting budget crisis will force even more savage reductions in social spending.

And for the poor who are the main victims of these policies, there will be the other face of the US state, which is growing stronger, not weaker—the police, the National Guard, and the vast, constantly expanding prison-industrial complex.

Therefore the Bush administration’s chief failure with respect to New Orleans — pouring money into “homeland security” while refusing US Army requests for more spending on flood defences — is entirely logical. It wants a state that is little more than a mailed fist at home and abroad.

The political furore over Katrina shows that the Republican right have miscalculated. The power of every state rests on consent and legitimacy, not just coercion. This is true internationally as well as domestically.

The shambles in Iraq has already done enormous damage, not just to th US’s image abroad, but also to the willingness of other states to see US global leadership as legitimate and in their own interests.

The reproduction of this shambles in New Orleans, inflicted now on US citizens, is likely to redouble this damage. Those visions of hell in the Superdome will lead even more people around the world to wonder whether US-style capitalism really is the best we can hope for. 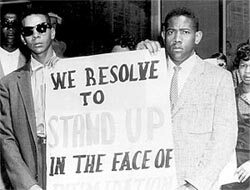