The ‘cleansing’ of Calais

This article is over 12 years, 3 months old
The British media squealed with delight when bulldozers demolished the ‘jungle’ refugee camp. Simon Assaf and Guy Smallman spoke to the victims and those who risked much to help them
Downloading PDF. Please wait...
Tuesday 29 September 2009

The victims of the West’s wars have become beggars on our doorstep. Desperate people trying to escape persecution on the other side of the globe saw their temporary shelters destroyed by the CRS French riot police last week.

The so-called “jungle”, a settlement of ramshackle shelters in woods north of Calais, had become a focus of warnings about refugees ready to “flood Britain”.

The French authorities moved on the camp at the insistence of the British government. Protesters were swept aside and refugees rounded up as part of “Nettoyage” – cleansing.

The term was coined by Eric Besson, immigration minister in Nicolas Sarkozy’s right wing government. In Britain, home secretary Alan Johnson expressed “delight” when informed that the camp was being demolished. New Labour’s Phil Woolas then declared that the Afghans were not real “asylum seekers” and did not deserve sanctuary.

Yet the refugees in Calais come from areas of intense conflict – Afghanistan, Somalia, Eritrea, Iran, the Gaza Strip, Kurdistan and Darfur in western Sudan.

We arrived in Calais on the 4.30am ferry, the day after the “Nettoyage”. We found a city of ghosts. The only signs of life were the police vans that prowled the streets. Some 300 Afghans, including many children, had been arrested the day before. But scores fled before the police and bulldozers moved in.

We spent the hours before dawn looking for them in the places where we had met them during our last trip.

All their usual shelters – under bridges, in abandoned Second World War fortifications or decoupled cargo trailers – were empty. The only signs that refugees had recently sheltered there were a few blankets, some empty tin cans and the ash from old fires.

We heard rumours that many had fled some 20 miles north to Dunkirk. But there were no signs of them in the rest areas that dot the motorway, or in the city.

The refugees had disappeared. The cleansing of Calais seemed complete.

At 8am we received a phone call telling us that the CRS were raiding the unofficial headquarters of the No Borders movement in the Calais docks.

No Borders, a coalition of activists from across Europe, were attempting to rescue refugees who escaped the round-ups. Several activists were seized in the raid, together with a group of Eritreans.

One group of activists who escaped the raid told us that they had found several young Afghans who were dis­orientated and in distress attempting to head back to the “jungle”. They quickly bundled them away before the authorities spotted them.

But the activists were becoming desperate. Police caught one as he was transporting some refugees to a secret safe house – a crime that carries a prison sentence under France’s harsh immigration laws.

Other groups were fanning out in an attempt to protect the other camps around the city.

The Afghans cannot be sent back to the war zone, so French authorities wanted to ship them back to their “point of entry” – Greece or Italy.

Word reached us that many of the Afghans had been released, and would be heading to a feeding point near the docks later in the day.

So we headed out to the “jungle”, just in time to witness bulldozers demolish the last of the shacks. A group of local dignitaries were watching, and, as the last shack was bulldozed into the ground, they stepped forward and congratulated a CRS officer who had spent most of the day posing for pictures.

When we last visited the site it was home to hundreds of refugees. Now all the trees had been uprooted, and the shelters crushed into a pile of twisted metal, pallets and plastic sheeting.

Among the group of witnesses was Sylvie from the Association Salam, a local organisation that stepped in to care for the refugees after the closure of the Sangatte Red Cross centre in 2002.

After Sangatte was demolished the refugees built temporary structures. The “jungle”, also known as the Pashtun Camp, was the most well known.

“This is all for nothing”, Sylvie said. “This is the same as when they closed down Sangatte. The refugees will set up new camps, and we will continue to feed them.”

We asked if this would make their work more difficult. “Yes, much harder,” she said, and then abruptly ended the conversation when a group of riot police approached her car.

“Now they will take my car registration number”, she said before driving off.

The closure of Sangatte left the refugees in a perilous state. The security provided by the Red Cross centre gave way to the unofficial camps.

Different ethnic groups and nationalities started competing over scarce shelter and locations. Gangs began to form, with raids and reprisals.

In one incident, fighting between Afghans and Kurds left one person dead and several others severely wounded.

“The Nettoyage was a PR stunt,” one of the local activists said. “Only the Pashtun Camp was destroyed. The Kurds and others were spared the bulldozers, for now.”

“We fear that by destroying the Pashtun Camp the Afghans will be at the mercy of the Kurds. This is a very bad situation,” said another.

By the afternoon small groups of Afghans had begun to gather in an old car park near the docks. A media scrum developed as the refugees gathered to collect food parcels.

One young Afghan, who spoke good English, said that the authorities had no choice but to release his group as they all refused to return to Afghanistan. He said he was from Jalalabad and was escaping from the Taliban and the foreign forces.

Another told us that the police cells were full, so they had been driven around in vans and dumped outside Calais. They had just made the arduous journey back on foot. Three people who had collapsed in exhaustion were covered in blankets.

Meanwhile, a group of photographers gathered around the people collecting food parcels.

On our return to Britain we saw their pictures under the headline: “New ‘jungle’ for asylum seekers springs up on outskirts of Calais”. 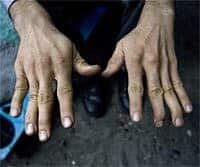 Iranian refugees in Calais: ‘The Basij crushed my fingers’

Refugee from Darfur: ‘I’m not coming for work but running from fear’