The demonisation of young people over gun and knife crime

This article is over 14 years, 9 months old
The recent murders of black people in London have led to talk of a "violent generation out of control". Makola Mayambika spoke to Socialist Worker about how young people are being demonised
Downloading PDF. Please wait...
Tuesday 17 April 2007

‘Tony Blair’s comments about how black families have a special responsibility for solving knife and gun crime outraged me. Blair said he was “lurching into frankness”, adding that violence would not be stopped “by pretending it is not black kids doing it.”

It’s a clear case of trying to blame the victims.

His comments reminded me of his attacks on Muslims – saying they have a “special responsibility” for solving terrorism.

It is not true that there is a problem with black families. Black parents want their kids to do well – look at all the extra Saturday schools run by black parents.

And black children start education with high expectations and high achievement. This is lost during their experience of education.

I work with kids – black and white – who have serious emotional problems. Most of them have been excluded from mainstream education.

The irony is that most of them are very clever in their own ways. But many have a mind of their own, so their main problem is that they don’t fit in.

Even the kids who come to us who can’t really read or write have got something about them – you can see they have real potential.

But they know that they have been rejected by the education system and society. Many of them have been passed from unit to unit.

They find out that however hard they try, schools don’t want them back in mainstream education – the schools are too worried about maintaining their results.

The kids start to learn that there is no point being “good”, so they may as well be “bad”.

It is not the case that parents aren’t providing – it’s the system that fails to provide for these young people.

We had a kid who had real trouble relating to other children. None of the schools wanted him back, even when he could have re-entered mainstream education. So he said that he had given up being good. For him, what’s the point of trying?

We are dealing with distressed and vulnerable children. Many of them are victims, not just of how our society fails young people, but also of what the system does to the adults in their families. Some of their parents have had a very tough time.

Housing is one of the things that makes a big difference to young people. The US civil rights leader Martin Luther King talked about the psychological impact poor housing has on people.

I was involved in a project going into a school on a local estate where some of the nearby flats were being demolished. A lot of the kids in the school lived in the flats.

I did a poetry project with them about what they felt about living in the flats.

They all said that they would miss their friends and their neighbours, and how that was what they liked about where they lived.

But they said that they wouldn’t miss the rats, the smell of wee in the lifts, the cockroaches.

One girl said that living in the flats was like being in a movie. She said that you saw police chases and helicopters around the flats all the time.

These are young people aged ten or 11. How can they go to school feeling proud, confident or valued when they are growing up in these conditions?

They are living alongside rats and so they feel that is what society thinks of them. Gun and knife crime expose the brutality of racism, and the impact of neoliberalism – the idea that everyone is out for themselves.

Education and society are not just failing black kids. Asian and poor white kids also find themselves undervalued and with very little chance in education or employment.

Most excluded kids want to be in school, however tough they may pretend to be. Sometimes you see them waiting outside school – they miss their friends.

One of the kids that I work with got involved in crime. He did it because he wanted to fund making music – the one thing he really cared about.

There are no real opportunities offered for him to develop his talents.

I see kids all the time who are talented, who are poets or musicians, but the system as it exists doesn’t absorb or value this energy or this talent.

One of the problems we face is lack of resources. In our unit, for example, low pay means that staff don’t stay around.

Most people employed at our unit are agency staff, so the kids can’t build up any long term trusting relationships. We don’t have the resources to give the kids the help they need.

This is the same throughout society – resources are not there for things that could change the lives of young people.

Instead Blair’s solutions seem to be more policing, stricter laws and imprisoning more young people. Britain already locks up more young people than almost all other countries in western Europe.

One of the reasons Blair gets away with his attacks on the black community is because black leaders aren’t offering a real alternative – many only look for individual solutions.

Look at figures like Diane Abbott MP for example – her solution to the problems in education is to send her child to a private school. Much of the black leadership also ends up blaming the black community.

We won’t solve the problems of knife or gun crime without understanding the impact of all these things – how young people are brutalised by inequality, poverty and racism.

Makola Mayambika works at a unit for children with emotional and behavioural difficulties. 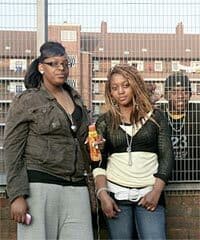 Young people on their experience of gangs and violence

Racism has destroyed my boys’ hope