The First Crusade: for faith and plunder

This article is over 13 years, 1 months old
The princes, knights, peasants and pilgrims who answered the pope’s call for the First Crusade in 1095 were driven by many different motivations, writes Conor Kostick
Downloading PDF. Please wait...
Monday 15 December 2008 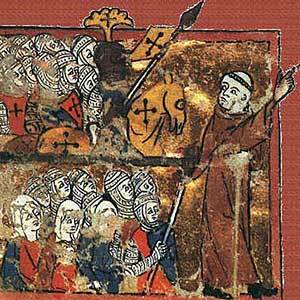 On 27 November 1095 Pope Urban II launched the call for a crusade to win Jerusalem and the other holy places in Palestine for the Roman Catholic church.

This “call to the cross” came at a time of deep social turmoil in Europe. In 1094 and 1095 Europe was devastated by floods, famine and plagues leaving millions destitute.

The following year, tens of thousands of people of all backgrounds left their homes in Europe to march on Jerusalem. The “people’s crusade” set off under the influence of popular preachers such as Peter the Hermit.

Some of these crusaders organised Europe’s first mass pogroms against the Jewish communities of the Rhineland, Bavaria and Rouen.

Among them were many thousands of knights – professional warriors who lived for the chase. If they were not waging war they were hunting, and the horse that they rode gave them not only military prowess but a social status that was greater than that of the foot soldiers.

Even greater throngs of more lowly non-combatants tried to keep pace with those trained for war. Farmers sold their lands and tools, except for a plough and a few animals. Hitching a cart to their oxen, they placed their remaining possessions in the vehicle, put their children on top and set out for the Holy Land.

Bonded peasants, the serfs, ran from the prospect of lifelong toil to obtain freedom in the ranks of the “Army of God”. With little more than a few coins, and dependent upon “the bounty of God”, they joined the crusade to escape their oppression.

Among the crowds were thousands of women. Their presence dismayed the senior clergy, but popular preachers distributed alms to them so that they could find husbands and protectors. Some women disguised themselves as men to cast off the role that had been assigned to them from birth.

As the great armies snaked their way along the old Roman roads, elderly men, monks, nuns, artisans and peasants joined the expedition. The poor escorted the princes and the glittering knights, who in turn felt some responsibility for their protection.

As this army of pilgrims marched east it plundered the Balkans, clashed with eastern Christians of the Byzantine empire and sacked the Armenian Christian city of Edessa before fighting repeatedly with Turkish tribes and Arab forces.

They died in great numbers. Ships full of pilgrims sank in the Adriatic. Stragglers left trails of dead across hundreds of miles, especially once the armies were south east of the Alps and could no longer count on the sympathy of Catholic Christian towns.

Once in Muslim territory enormous numbers perished, both in battle and from the hardship of desert, mountain and disease.

Contemporary accounts of the First Crusade help us understand how different social groupings took up the crusade in different ways, sometimes leading to clashes between them.

These tensions came to the surface when the expedition stalled from July 1098 to May 1099.

The princes showed no interest in continuing the march to Jerusalem and sought to establish lordships for themselves in what is today southern Turkey, Lebanon and Syria.

It was popular pressure that provided the impetus to drive the army towards Jerusalem, a popular movement that was radical and insubordinate towards to the senior figures on the crusade. But it was also ruthlessly murderous towards the local populations.

This was not simply because of the religious ideas the low-ranking crusaders adhered to but also because intended to make a new life for themselves, free from servility, by taking over the homes and lands of those they had slain.

It also became clear that a previously unrecognised type of person was present on the First Crusade. They played a key role as the “shock troops” of the movement – the first into battle, first on to the walls of a besieged city, rash, impetuous and thirsty for fame. These were senior nobles who had yet to establish families or careers and were termed as “iuvenes”.

Recent discussion of the First Crusade has been dominated by those who argue that it was a spiritual endeavour.

However, eyewitness accounts describe these iuvenes as extremely violent, both towards non-Christian enemies and to fellow Christians on their return to Europe.

They sought glory in battle, slaughtered both combatants and civilians and revelled in displays of their riding ability.

The chance of seizing new lands in the east was one of the great motivations for joining a crusade as competition for land in Europe among the princes and knights was in danger of triggering endless wars.

But their motivation for joining the crusade was not strictly a hunger for land and booty. The violence of these bands of knights in search of the opportunity to prove their military prowess was destabilising Europe.

More than one clerical author breathed a sigh of relief that the destructive energy of the knightly order had been deflected by the idea of attacking an external non-Christian enemy.

When the crusaders finally captured Jerusalem on 15 July 1099, the streets of a city famed for its religious tolerance were full of rotting corpses of its Muslim and Jewish inhabitants. Over 40,000 are believed to have been killed in a few hours.

Overall, the motivation of those who took part in the First Crusade was as diverse as the various social classes who took part.

The balance between spiritual and material considerations varied considerably from social group to social group.

And figures displaying considerable devotion to the spiritual goals of the expedition as well of those of a more cynical disposition could be found within each class.

What my new history attempts is an account of how such a diversity of outlook affected the history of the crusade and it also explains the particular violence that was unleashed on Jerusalem.

Over time, and despite further crusades to the Middle East, Christian Europe could not maintain its presence in the region. It was a brutal society but one which was economically and culturally inferior to that of the Muslims.

For the aristocrats and knights the fall of Jerusalem in 1187 to Salah el-Din’s (Saladin) army was a disaster. They fled back to Europe, their lands and property passing to the Muslim princes. Unlike the fall of the city to the crusaders, there was no massacre.

Many of the settlers remained in the region and gained protection under the new rulers. The final defeat of the crusades put a stop to these endless wars allowing the descendants of the pilgrims to live in peace – many can still be found today along the coastal areas of Lebanon and Syria.

The Social Structure of the First Crusade by Conor Kostick, is published by Brill Academic Publishers
Topics History, Jerusalem, Palestine 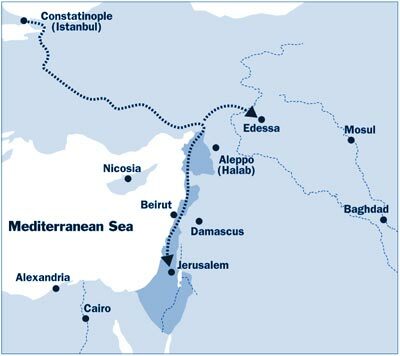 The route of the First Crusade