The headlines you didn’t read on crime

This article is over 19 years, 11 months old
\"IT'S official: stunning new report exposes crime figures are falling.\" This is a headline you could have read last week, but didn't. Instead the tabloids were full of stories about gangs of hoodlums running out of control, terrorising vulnerable people.
By JUDY COX
Downloading PDF. Please wait...
Saturday 20 July 2002

‘IT’S official: stunning new report exposes crime figures are falling.’ This is a headline you could have read last week, but didn’t. Instead the tabloids were full of stories about gangs of hoodlums running out of control, terrorising vulnerable people.

Horrific pictures of crime victims were used to reinforce the banner headline ‘Everyone Is A Victim’ in the Daily Mirror. The spark for these outpourings was the annual police recorded crime figures which apparently showed crime on the rise. Police organisations are demanding special attack dogs and the right to use plastic bullets to quell the lawlessness on our streets.

In fact there is absolutely no evidence to prove more police equals less crime. Another report on crime also released last week attracted hardly a column inch. The British Crime Survey (BCS) is generally considered to be a much more reliable source than the police figures, which are solely based on incidents people bother to report.

The BCS is based on interviews. It therefore includes unreported crime. The survey compares today’s crimes with those of 1999. It shows:

The survey shows that overall crime has fallen by 39 percent compared with 1997, by 14 percent compared with 1999, and by 2 percent over the last year. Street robberies have risen by 28 percent. This has fuelled the media feeding frenzy with lurid stories about street crimes turning city centres into ‘no go’ areas. But the rise is largely because of a rise in the theft of mobile phones by and from young people.

Many phones are simply left somewhere, but have to be reported as stolen for insurance purposes. The police figures show a rise in violent crimes, like assault, of 11 percent. By contrast the BCS report shows that violent crimes fell by 2 percent. And it includes many domestic incidents never reported to the police.

The discrepancy arises because many incidents which do not involve any violence are classified as ‘violent’ in police definitions and reports. The widespread fear of crime, which is generated by media scares, is totally out of proportion to the general experience of crime. The risk of being attacked by a stranger is 1.5 percent, exactly the same as 20 years ago. Fear of violence in public places, like dark streets and parks, is reportedly very high.

But people are far more likely to be attacked by people they know in their homes than by strangers, with 26 percent of violent incidents occurring in the home.

Some 19 percent of violent incidents occur in pubs and a further 17 percent in workplaces. The pictures of crime victims published in the press show horribly disfigured, mainly elderly people who have been attacked and robbed for pitiful amounts of money.

But these awful cases are exceptional. Statistically the victims of crime are overwhelmingly young adults, the unemployed and the poor. When the political establishment whips up panic over crime and politicians promise to be tough, judges and magistrates send more people to prison. Today there are 70,000 people in prison, more than ever before, and more than any other country in Europe.

Robert Bentley was 17 years old when he stole 1,000 cigarettes to fund his drug addiction. It was his first offence. While on bail he stole a bottle of whiskey for the same reason. The courts were directed to adopt a strict ‘two counts and you’re out’ policy, and he was sent down. On his first night, locked up without help or treatment, he was beaten so badly by his cellmate that he spent three days in hospital, chained to a police officer while his shattered jaw was rebuilt.

Women are separated from their children because of drug problems or unpaid bills.

Children are also increasingly locked up. Suicide rates among these prisoners are soaring. The number of 15 year olds remanded in prison has gone up by nearly a quarter-not for violent crimes but for crimes against property. Crime statistics have always been a political battlefield. Rising crime justifies higher levels of policing, stronger laws, longer sentences, more curfews and more punishment.

It also creates an atmosphere where Tory and New Labour politicians, and the right wing media, can scapegoat deprived people who break the law for problems in society. They dismiss examining the social problems behind crime. Instead they blame what they call dysfunctional, anti-social and irresponsible individuals.

But a number of serious government reports and studies reveal that crime is intimately linked to economic conditions. During recessions, when people are thrown out of work, crime rises. During economic booms, when more people get decent jobs, crime falls. The falling levels of crime across the Western world over the last ten years have nothing to do with ‘zero tolerance’ policies or more police on the streets, and everything to do with relatively low unemployment. Desperation and poverty drive people into committing crimes.

The causes of crime are the miseries created by the system, not anti-social individuals.

Climate change: burning the world to keep up profits 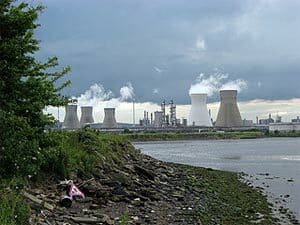 Oil industry: the hands on the tap