The ‘justice’ system and class power

This article is over 11 years, 7 months old
The bosses have repeatedly used the courts to stop strike action—does the Unite union’s victory against BA means that the law is sometimes on our side, writes Simon Basketter
Downloading PDF. Please wait...
Tuesday 25 May 2010

The law is an instrument of class rule. Last week one judge banned a strike because the number of spoiled ballots in a vote by BA cabin crew wasn’t put on Twitter.

A couple of days later two other judges disagreed—so the strike was allowed to go ahead.

Both decisions were based on assessments of how best our rulers can control the unions.

The courts are a theatre of class struggle.

Spend any time in a criminal court and you will see that the people on trial are overwhelmingly and disproportionately poor and from ethnic minorities. A day in court is a day of watching the punishment of misery.

At the other end of the court sit the class enemy—the well educated and the comfortable.

If you go to the fancier courts they wear funny clothes—not just for “tradition” but precisely to make themselves different.

Barristers’ smocks have pockets on the back. The reason is that is where you used to drop the coins for the bribe. Now it is just a “tradition”.

The purpose of the law and the courts is to preserve the rule of the rich.

The words “law” and “order” always go together. The “independence of the judiciary” means independence from any control by ordinary people.

The world in which the judges live is incredibly exclusive.

Lord Justice Lawton, who started his career by joining the British Union of Fascists, claimed in 1975 that “Judges are drawn from all ranks of society”.

Of course these “ranks of society” do not include the poor who appear before them in the courts.

It’s a bit better now than then, of course, but not much.

One report in January noted that there are now women and ethnic minority judges in family and immigration courts but that both are missing from the higher courts, which are more powerful.

The report, however, completely ignored the question of class. It is still the case today that 90 percent of judges went to Oxford and Cambridge, and four out of five judges went to public school.

To be a judge in a higher court means you have to have been a barrister, which is still impossible for anyone without money.

Judges are deeply loyal to their class. They are almost all deeply reactionary people.

The “law” that flows from them is a law for the rich, made by the rich. There is no way of electing a judge, or of removing one once appointed.

Yet judges have the power to lay down the “common law”, and to interpret laws made by parliament. Appeals against a decision by one judge can only be made to other judges, equally unaccountable and unrepresentative.

This matters because judges’ deep sense of class makes them absurdly loyal to the police.

We live in a society divided into classes.

Our rulers use both force and consent to secure their rule.

So the law will ban some strikes and the state will repress any movement that fundamentally challenges our rulers’ power.

The state’s claim to stand above conflicts and to mediate between different groups in the interests of society as a whole is a lie.

But this fiction is useful for the ruling class.

If all strikes were made illegal, or all protests banned, the naked class nature of the state would be clearly revealed to the majority of people.

So the need to keep up an appearance of legal neutrality may at times override the immediate needs of an individual capitalist—as in the case of the Unite appeal against British Airways this week.

The law is mainly used to control and constrain strikes and protests to try and keep them in “safe” channels.

Mass movements and protests can win reforms that make the law more favourable to working people, but ultimately the law always protects the class that rules society.

It is of course necessary for the victims of injustice to challenge the authorities through the legal system.

Such challenges sometimes, but rarely, bring relief to people who have been badly treated or wrongly imprisoned.

The late and unlamented Lord Denning explained why in a moment of cynical candour.

As the evidence mounted of miscarriages of justice against Irish people as part of the British state’s war against the IRA, Denning explained that even if the Irish were innocent, to admit it would reflect so badly on the British legal system that it was better to allow them to rot in prison.

It would be, in his words, an “appalling vista” to do otherwise. 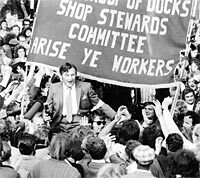 When workers beat the law