This article is over 19 years, 7 months old
A BOGUS group posing as an authority on immigration in Britain has become the toast of the right wing press and Tories. Migrationwatch UK is constantly quoted in the Times, Sun and Daily Mail. These are the papers that relish attacking workers on strike as much as they enjoy bashing refugees. The group's name is supposed to make you think it is a respected think-tank, like Human Rights Watch.
By Helen Shooter
Downloading PDF. Please wait...
Saturday 14 December 2002

A BOGUS group posing as an authority on immigration in Britain has become the toast of the right wing press and Tories. Migrationwatch UK is constantly quoted in the Times, Sun and Daily Mail. These are the papers that relish attacking workers on strike as much as they enjoy bashing refugees. The group’s name is supposed to make you think it is a respected think-tank, like Human Rights Watch.

It claims, ‘This is an independent organisation. We have no political axes to grind.’ The right wing newspapers treat it as a serious group that is just interested in the facts about immigration. But its real aim is to whip up fear and hysteria over refugees. The men who run Migrationwatch UK are happy to serve some of the most privileged, anti working class people in the country.

The organisation was set up just a year ago by ex-diplomat Sir Andrew Green and his sidekick, Oxford don David Coleman. The two reek of the Tories.

Both worked for Margaret Thatcher’s hated Tory government, the union-busters who systematically tried to smash ordinary working people. Coleman is now a professor at the elite and luxurious St John’s College at Oxford University. He was a special adviser to several top Thatcher-loving Tories between 1985 and 1987.

One of the ministers he served was Leon Brittan. As home secretary Brittan spearheaded the Tories’ attack on the miners during their strike in 1984-5. The Times said of Brittan, ‘His rapid authorisation of police reinforcements to keep open the Nottinghamshire pits played a crucial role in defeating the miners’ strike, as did his clear guidance on picketing law.’ David Coleman also advised ultra-posh William Waldegrave, Tory environment minister.

Waldegrave was one of the architects of the hated poll tax. He chaired the working party that dreamt up the scheme. He also pioneered the Tories’ 1989 Housing Act that attacked council housing and paved the way for soaring rents. Coleman is still a close friend of Jonathan Aitken, the former Tory cabinet minister.

Aitken lied in court to cover up how his Saudi friends paid for him to stay at the Ritz hotel in Paris when he was defence minister. He was jailed for 18 months for perjury and perverting the course of justice. Sir Andrew Green, the founder of Migrationwatch UK, has an equally dirty past. He started out as a top civil servant who became an ambassador and twice met Oliver North in Washington during the 1980s.

North was famously prosecuted for his role in the Iran-Contra affair. The Iran-Contra affair involved Ronald Reagan’s government selling arms to Iran. The proceeds were diverted to fund the brutal Contra rebels who were trying to overthrow the popular left wing Sandinista government in Nicaragua. Green went on to become ambassador to Saudi Arabia from 1996 to 2000. At the same time he was a non-executive director for the arms firm Vickers, one of Britain’s biggest arms exporters to Saudi Arabia.

In 1996 the Saudi rulers made it clear that arms deals, including ones with Vickers, were under threat. The hitch was a Saudi dissident named Mohammed Al-Massari. Al-Massari had been imprisoned and tortured by the Saudis for opposing their brutal regime.

He fled to Britain, but the Saudi regime were keen to get their hands on him again. They told Green that the arms deals could be cancelled if the dissident was allowed to stay in Britain.

Green obliged them by straining every muscle to get Al-Massari deported. Amnesty International’s assessment was that ‘the UK government’s stance reflects a desire to preserve good relations with Saudi Arabia at the expense of raising human rights issues’.

This is the rotten background of the rich men behind Migrationwatch UK. Their figures are as bogus as their claims to be non-political. The number of refugees coming into Britain has been consistently overestimated for the last ten years. That is according to a report released last month by the Office of National Statistics based on its assessment of the 2001 census. Britain ranks only tenth among European countries in terms of asylum seekers per head of the population.

Yet the right wing press repeat the made-up figure from Migrationwatch UK that immigration will rise by two million in the next decade. Migrationwatch UK echoes the arguments put out by the far right. The group brands all migrants as a ‘problem’.

It damns nurses from abroad who play a vital role in the NHS and students who come here to study, as well as desperate refugees fleeing war and persecution. The group scapegoats migrants for the shortages in ‘housing provision, housing demand, health, education and transport’.

No wonder the Nazi British National Party has praised Migrationwatch UK. New Labour makes feeble attempts to distance itself from the group’s findings. But the group reinforces the government’s crackdown on refugees. David Blunkett himself commented that refugee children ‘swamp’ local schools. Migrationwatch UK was even invited to contribute to a home affairs select committee alongside the highly regarded Refugee Council.

Figures that don’t add up

LIE 1: Refugees are flooding into Britain

THE NUMBER of people who applied for asylum in Britain actually fell last year to 71,365. That is just 0.12 percent of the population. The right wing press don’t comment on the high number of Australian and French people who come to Britain to work. Instead they whip up racism over ‘floods of Gypsy beggars’ or ‘immigrants from sub-Saharan Africa’. Britain and other European countries face being underpopulated because of the low birth rate. ‘The working population will shrink rapidly. I don’t know how we are going to run our societies with such a rate of decline,’ said an economics professor in the Observer.

LIE 2: Britain is a magnet for asylum seekers

REFUGEES ARE only entitled to £37.77 a week to live off. That is 70 percent of income support, which poor families have to struggle to live on. The government refuses to allow refugees to work. That means some are reduced to begging on the streets.

Refugees are not a drain on resources. Just £1.78 a month is spent by every taxpayer on supporting refugees – just 0.25 percent of Britain’s total budget. The overcrowding in schools, hospitals and doctors’ surgeries is not caused by refugees, but by chronic underfunding from Tory and New Labour governments.

LIE 3: Most refugees are ‘bogus’

THE SINGLE largest group of refugees entering Britain come from Iraq. New Labour presented the case for the human rights abuses many Iraqis suffer in a video it promoted last week.

A high proportion of refugees also come from Zimbabwe, Somalia and Afghanistan. Many regimes around the world, often allies of the US and Britain, inflict torture and violence on their people.

MANY INDUSTRIES in Britain are crying out for workers. There is a shortage of 200,000 basic tradespeople and labourers, and 80,000 truck drivers. The NHS needs 1,000 lab technicians.

People who settle in Britain are often forced into jobs no one else will do. Some 70 percent of catering workers are from abroad. Britain’s agribusiness relies on 19,000 workers from Eastern Europe to pick fruit and vegetables each summer.

Driven to their death

TWO GROUPS of refugees fleeing to Britain last week showed the desperate methods they have been forced into by New Labour’s policies. Some 13 refugees were found in a sealed container in Folkestone wrapped up in lengths of carpet.

Fortunately they escaped the tragedy of the 58 Chinese refugees who suffocated in the back of a lorry in Dover two years ago. But two boys, 12 and 14 years old, did not get to Britain alive. They were found dead under the carriage of a plane at Heathrow airport last week.

The two boys were found huddled together in the plane’s wheel compartment. They died from lack of oxygen and the freezing temperatures which can reach minus 40C.

A police spokesperson commented, ‘Every year we have between six or ten cases of people dying as they try to make their way here. But we have never before seen stowaways as young as this.’

Blunkett boasts of closing the Sangatte refugee camp. But it only means desperate people will resort to risking their lives by stowing away on planes and boats to get into Britain. 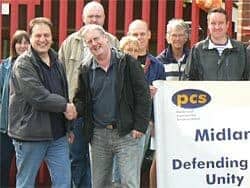