The nightmare that is haunting Bush now

This article is over 18 years, 3 months old
Alexander Cockburn is a veteran radical journalist in the US who edits the political magazine Counterpunch. He spoke to Socialist Worker about the deep problems facing President Bush
Downloading PDF. Please wait...
Saturday 27 September 2003

What’s the reaction in the US establishment to what’s happening in Iraq?

I think most people in this country see it’s beginning to be a real disaster.

But it seems the US establishment is the last to know. I think the mindset of the main promoters of the Iraq disaster, and their arrogance, is such that they are probably the least capable of making any intelligent assessment of what a major screw-up the whole thing is.

I’m talking about the people known as the neo-conservatives, the core of the war party, the people on the Wall Street Journal editorial page, Rupert Murdoch’s papers, Fox News, CNN, who did a great deal fomenting the whole thing. It’s about more than the Project for the New American Century people. I think there is a tendency to focus a little too much just on a very small circle of people, as if they were pulled out like a tooth out of a jaw the health of the whole jaw would improve markedly.

There is a wider stratification of people also who want to see no hindrance to America’s rise as an imperial power. If you read the smarter people, you get a sense of what some of them think should be done about Iraq.

Look at Anthony Cordesman. He’s been in government, in the Pentagon, and in the Centre for Strategic and International Studies, the main Republican think tank. He wrote a memo before the war where he said it’s going to be a lot harder than people think to run an occupation. He wrote another memo the other day saying, ‘Of course there aren’t any more US troops available to send to Iraq.’

American policy has been to pour money into very expensive equipment, which makes a lot of money for the arms manufacturers, rather than basic troop provision. People in the press say, ‘Send another 100,000 troops.’ The troops aren’t there to send. Then others say, ‘What about the UN?’ But, as Cordesman has written, there aren’t vast numbers of UN troops available, and in terms of any real military impact it isn’t going to make much difference. So for people like Cordesman the real answer would be a strategy that goes back to Nixon and Vietnam.

That is to train up the repressive elements of the old Saddam Hussein apparatus and try something like the Phoenix programme, which was basically murdering and assassinating opponents with death squads and the like.

What is the mood among ordinary people in the US over Iraq?

Everything that the critics of the war said is coming true, every single thing. Every boast the pro-war lot made has gone wrong. They said it would unlock a solution of the Israel and Palestine situation. Wrong.

They said militarily it would be a pushover, and the occupation would produce a stable Iraq like Lebanon in the 1950s. Wrong. My brother Patrick Cockburn wrote a piece in the Independent saying it reminded him of the British and the terrible mess of the Boer War. That’s not a bad parallel.

I’ve never been a guy who’s said that Bush was really substantively as popular as people claimed. Right from the word go, people in America have been pretty dubious about him. Many people haven’t forgotten the stolen election of 2000. After the attacks on the World Trade Centre on 11 September there was a certain rallying round the flag stuff.

But now Bush’s ratings are in the low fifties. The economy is not in great shape. Then every day you are reading news of two or three US troops killed in Iraq. This is a nightmare for him. The local newspapers find the grieving family, there are pictures of them, and an angry father or mother is saying ,’Was it all worth it?’

An article in the Washington Post recently said they are not even reporting the wounded. It’s only reported if someone is killed. The reporter discovered that because of the treatment available people are being pulled out now that 20 years ago would have been dead. These people have sustained some terrible wounds, but it’s not being reported at all.

We are running a piece in Counterpunch from a former master sergeant who is analysing the way they are classifying some people who are killed. If it’s an ‘accidental death’ it can be a way to conceal they were really killed in military engagement.

How has the Democratic Party responded to Bush’s growing problems over the war?

Howard Dean, one of those who wants to be the Democrat presidential candidate, is doing very well.

But the idea that he is particularly anti-war, or anything but a dead-centre Cold War Democrat, is completely laughable. Dean was smart enough and had enough political nerve to say that the US needed cover from the UN to go into Iraq. That’s all he’s ever said. Go back and look closely at what he was saying in the early spring. One day he said we can’t move a muscle without the permission of the UN.

The next day he said we’ll give Saddam 30 to 60 days to disarm, we should ask the UN to give an OK, and if they don’t we should go ahead. So he only very marginally differed from the Bush line.

Every Democrat candidate who has a chance of getting the nomination next year-Howard Dean, John Kerry, Joseph Lieberman and Richard Gephardt-all of those are in favour of sending more troops to Iraq, of bringing in the UN as a continuing military presence.

So the idea the Democrats are really putting up a peace candidate, as opposed to the usual game of trying to drag some of the left liberal people into their campaign, is an incredible illusion. George Bush looks as though he is barely capable of sequential thought. But Blair was seen as the guy who is smarter. So when it came to making the rationale for war he looked a little more convincing.

But they both told the same lies. They are in very deep political trouble, and they know it’s getting deeper. Bush is waving goodbye to sections of his support

US TROOPS are attacked I’m told up to 60 times a day, just in Baghdad, and they’re losing an average of a man a day. If you’re a US soldier, you’re 20 years old, you didn’t think it was going to work out like this, you were conned into believing the war was a great thing for democracy and liberation, and you’re being shot at every day. Individually you find American soldiers here who can be very sympathetic and who realise it’s gone wrong.

You also find soldiers who are behaving very badly. I was in the town of Fallujah a few weeks ago where US soldiers saw a man sitting in a chair in the street said, ‘You get up and I’ll break your fucking neck.’ When I complained to his sergeant, he made excuses and said, ‘The guy got up at 3am, he’s been shot at every day, he’s been here since March.’

I said I understand all that. One has to have sympathy as a human being. But it was your country that wanted to invade this place. You were desperate to come in, you didn’t want the arms inspectors, you haven’t found any weapons of mass destruction.

This is an army that is tired-low morale, low fire discipline, low discipline all around. The number of shootings of civilians is skyrocketing. And now there is a real guerrilla army. I met the US general in charge of prisoners of war at the former prison outside Baghdad. She actually referred to a resistance force. She didn’t talk about terrorists-not once did it cross her lips.

I find the real soldiers know they’re involved in a guerrilla war. They know it’s not working. They know the place is falling to bits. The fact is that months after the war was officially supposed to be over, there were hundreds of people dying in this country every week by violence. There is a real guerrilla war under way here, and when you are on the ground you realise it’s moving out of control.

To read the full interview go to www.znet.org

9 April ‘Liberation day’, as the press calls it, after Saddam Hussein’s statue is toppled in Baghdad. US bombs kill four Iraqi children in Fathlia, northern Iraq.

10 April ‘We have no desire to occupy Iraq’-Paul Wolfowitz, US deputy defence secretary.

12 April 200,000 march in London against the US occupation. Millions demonstrate across the world.

15 April US troops shoot ten Iraqis dead as they protest in Mosul against new US- appointed governor.

17 April US firm Bechtel gets $680 million contract to reconstruct Iraq.

18 April 20,000 demonstrate in Baghdad with banners: ‘Leave our country. We want peace.’

23 April Ari Fleischer warns Iran against ‘outside interference’ in Iraq.

28 April US troops kill 13, including children, who protest in Fallujah.

16 May Bremer announces the move to a transitional government in Iraq will be delayed indefinitely.

19 May 10,000 Sunni and Shia Muslims march together in Baghdad against the US occupation.

22 May UN resolution gives US and Britain control over selling Iraq’s oil.

25 May There are reports from the Red Cross that the US is denying it access to 3,000 prisoners who are being held bound and gagged at Baghdad airport.

26 May US troops open fire on a wedding party in Samarra in Iraq, killing four guests.

10 June Wolfowitz warns North Korea and announces a redeployment of US troops to border with South Korea. Rumsfeld warns Iran, claiming it is developing nuclear weapons.

12 June US troops kill at least 70 Iraqis after opening fire on what they call a ‘terrorist training camp’ near Rawa in central Iraq.

21 June An echo of Vietnam as US troops copy a scene from the film Apocalypse Now by playing Wagner’s Ride of the Valkyries as they smash homes in Ramadi, western Iraq.

5 July Home Office announces it wants to deport Iraqis, as the country is ‘safe’.

15 July US has already spent $48 billion on war. New Labour says it is spending £5 million per day.

27 July 11 killed when US forces open fire on a crowded street in Baghdad.

8 August US troops in Baghdad are now killing an Iraqi almost every day. A father and three children are shot dead as their car is targeted at a US checkpoint.

27 August Latest toll of journalists killed in Iraq is 17. Most have been killed by US forces.

1 September Poll shows 61 percent of people in Britain oppose the occupation of Iraq.

8 September Pentagon admits the US is spending $3.9 billion in Iraq and just under $1 billion in Afghanistan every month.

12 September US troops shoot dead ten American-trained Iraqi policemen outside Fallujah. US dead to date in Iraq is 295.

13 September The total number of Iraqis being held without trial in Iraq is now 5,500.

Anti-war protests spread across US 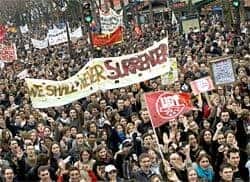