The People’s Assembly: people vs austerity

This article is over 8 years, 7 months old
Socialist Worker spoke to people about how they want to fight austerity
Downloading PDF. Please wait...
Tuesday 25 June 2013

Some 4,000 people attended the People’s Assembly in London last Saturday. The event proved, without doubt, that there is a mood to take on the Tories in Britain.

Socialists, trade unionists, disability rights campaigners, anti-racist activists and others came together to debate how to stop austerity.

A session on economics saw a debate on Keynesianism while anti bedroom tax activists discussed their campaigns in a workshop on tackling the housing crisis.

“Getting a council house in the mid 60s made life idyllic,” said Jerry from Cambridge. People debated the best way to win better housing.

Paula Peters from Disabled People Against Cuts said, “We need more direct action. Meetings are great but we need people out there.”

Throughout the day, people spoke about the need to reject the idea that benefit claimants are “scroungers” or that some people deserve help more than others.

It was a breath of fresh air in a situation where every mainstream political party supports cuts and refuses to stand up for ordinary people.

There was lots of agreement on the devastating impact of the Tories’ cuts and the need to stop them. But there was debate about the best way to do that.

And there was some frustration that union leaders, some of whom spoke at the event, have failed to lead the kind of fight that can win.

She added, “We’ll fight as hard for our people as they fight for theirs.”

Anyone who mentioned a general strike, or called on unions to coordinate action, won loud applause.

Jenny Sutton from the lecturers’ UCU union spoke in a workshop on re-unionising the UK. “There is no lack of spirit and no lack of willingness to fight,” she said.

“But people are saying we don’t have the leadership from the front to give us the confidence to come out all together and resist this government.”

Pat Carmody from the Unite union described how he had built a union branch in a call centre from zero to 120 members. “There are no no-go areas for trade unions,” he said. “When people fight you get people behind you.

“Strikes are popular,” he said, to cheers. “Strikes don’t damage unions —they build them. Name the day—we’ll be out.”

Len McCluskey, Unite’s general secretary, was cheered when he talked about strikes to defend workers.

But he hasn’t called those walkouts. Many people in the audience heckled McCluskey with shouts of “strike”.

And while his speech sounded radical, he was careful not to promise very much. McCluskey told the audience that we have to “create the right climate” to call mass industrial action—implying that such a climate doesn’t exist.

PCS general secretary Mark Serwotka was cheered when he said there was “an awful political consensus across the Tories, the Lib Dems and Labour that austerity is the only way forward”.

He said we should be fighting for more than the “austerity lite” on offer from Labour.

Serwotka recently called off a plan for a national one-day strike by PCS members on 26 June. But the PCS has been engaged in a series of sectional strikes for the past three months.

“We’re now consulting as we know we need to escalate,” he said. “But how much easier if would be if every union joined us.”

“If we don’t turn the tide we’ll regret it for decades to come,” he added. “It’s time we fought with our hands untied and socked it to these vicious ruling class bastards.”

Organisers of the assembly drew up a declaration. Its goal is to force the government to abandon austerity.

It has called a “national day of civil disobedience and direct action against austerity” on 5 November and plans another National Assembly in spring next year.

The assembly showed the potential for building large scale resistance to the Tories. The task now is to make that a reality. 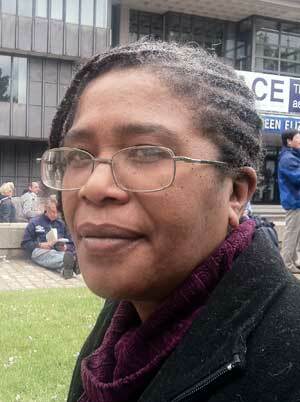 “I’m on benefits and I’m likely to be evicted. I have a chronic, debilitating health condition and doing too much causes a relapse. But I’ve been put onto Employment Support Allowance and have to look for a job.

“It’s not easy trying to live on £60 a week. Everything’s a struggle. I’ve cut my food allowance to around £7 or £8 a week because of the bedroom tax. I eat bread and biscuits.

“I’m getting less and less money to live on. My gas and electricity bills have doubled. I dread the winter because I’ll probably end up owing them money. And even if I did find a job, I wouldn’t keep it because of my health.

“I want a socialist government. I don’t vote Labour, I vote for the socialist candidate. Unless Labour reclaims its socialist identity, I can’t vote for them.”

“The only people threatening Britain are its ruling elites. The enemy is always at home. We live in a country where there is no opposition apart from us.”

Stand up to racism

Diane Abbott MP spoke at a workshop on immigration, countering racism, Islamophobia and the far right.

Guy Taylor from Joint Council for the Welfare of Immigrants, Mohammed Kozbar from the British Muslim Initiative and Sabby Dhalu from Unite Against Fascism (UAF) also spoke.

Abbott made a powerful speech. “When you have economic hard times you always see a rise in racism,” she said.

“Anti-immigrant racism has been the classic way of dividing the working class.

“Don’t let people tell you in some kind of phoney workerism that we have to listen to these poor working class people who are unhappy about immigration.

“We certainly have to listen to working people about real issues, like the failiure to build enough council housing

“Nothing is gained by conceding to myths about immigration.”

She added that the Tories aren’t the only party to attack migrants.

“People say that the Labour Party in government had an open door policy,” she said. “Well that’s news to me. Actually it brought in some quite draconian policies.”

Speakers from the floor discussed the fight against the English Defence League (EDL).

Weyman Bennett from UAF said that anti-fascists had hindered the EDL’s attempt to benefit from the recent killing of a solider in Woolwich.

“I am sick of seeing [EDL leader] Tommy Robinson on TV,” he said.

“But they were not able to link with the mainstream like the Front National in France has over equal marriage.”

“We’ve been put on notice of redundancy and people don’t know what their futures will be.

“People have to reapply for jobs but we don’t even know what the job entails because they are still deciding what to cut.

“The cuts in education mean there is a lack of suitable courses for young people. And people are affected by other benefit cuts like the bedroom tax.

“If you’re over 24 you now have to apply for a loan to take a course. People just won’t be in a position to do that.”

“Today is fantastic. It is all about inspiring each other. I hope it will give people confidence.

“Sometimes people feel cowed and divided. But today shows there are many of us who feel the same way. This is about solidarity and that makes us stronger.”

“I enjoyed the People’s Assembly tremendously.

“I met people here from York who are interested in setting up a north Yorkshire People’s Assembly. I’m going to go to our housing and the health committee and see who else wants to get involved. I don’t really know where it’ll take us yet.”

“I would like to see coordinated, sustained action against the Tories. We need occupations, street blocking and refusal by workers to administer government policy.

“We can beat them. But we need to move people to the point where they think they can change things. It will be interesting to see where the People’s Assembly leads.

“I want it to lead to a movement that is about absolute change and looks for different structures of society.”

“I came to the People’s Assembly because I wanted to find out what alternatives there are to the idea that austerity is necessary.

“I can’t believe there isn’t a better way to organise things than this.

“I think there needs to be a greater effort to counter the idea that benefit claimants are scroungers.

“And we have to make people feel they have more control because lots of people feel helpless.”

Arguments for action at People's Assemblies around the country

People's Assembly is a chance to fight back