This article is over 12 years, 8 months old
Siân Ruddick looks at the role of the police in maintaining class rule
Downloading PDF. Please wait...
Tuesday 28 April 2009

the police. We are told that the police exist for our benefit.

They are said to protect us from crime and are supposed to respond to all people throughout society equally – unless you fall into the “criminal” category.

The police uphold “law and order”. But this role doesn’t work in everyone’s interests – it backs up some people much more than others.

The law and order that the police protect is that of the rich and powerful.

These are the people who own and control the resources of society – the factories, call centres and businesses.

This ruling class is determined to maintain its domination, but it is far outnumbered by the people who are forced to work in order to survive.

It needs a powerful state and armed bodies, such as the police and the army, to keep control over those at the bottom and stop them threatening its power.

So there are endless laws when it comes to protecting property. And the police are most focused upon protecting the property of the ruling class.

In this context it is easier to understand why the police treat working class people the way they do – particularly when they take part in any kind of resistance.

Strike action directly threatens the process of production and the profits of the rich.

The police always back the bosses during strikes – whether by protecting scab labour or harassing strikers.

The police force as we know it today was formed as a way of dealing with working class resistance.

The “Peterloo Massacre” in 1819, where part-time soldiers killed 11 people on a demonstration demanding workers’ rights in Manchester, sparked a wave of strikes and protests that frightened the ruling class.

Some sections thought that a police force would be able to dish out punishment with truncheons and arrests – without creating “martyrs” to further inflame working class anger.

One of the first things the newly formed police force had to deal with was Chartism, the great working class movement of the 19th century.

This aimed to take back some of the fruits of workers’ labour from the bosses and landowners.

Many ordinary people resisted the police’s attempts to keep the working class in order.

To enable the police to carry out their role, the state strives to have a monopoly of violence.

Ordinary people fighting outside a pub may be arrested, charged and punished according to the law.

But the same rules do not seem to apply to the police. The police have been responsible for countless deaths – whether of protesters, strikers or of those held in police custody.

Individual police officers are sometimes suspended from duty or moved to different departments.

But police officers are rarely brought to justice by the courts for deaths they have been responsible for.

As well as the key flashpoints in the history of the police in Britain – the Miners’ Strike, the poll tax riots and so on – there is the day to day harassment of working class people.

Stop and search has been used systematically against black and Asian people.

Although the names of the laws have been changed, it remains oppressed groups who are the targets.

The role that the police play in preserving society as it currently stands explain why oppression and discrimination feature so strongly in the “canteen culture” of the police.

Racism and sexism are rife because the have to uphold the prevailing ideas of a society based on inequality.

The police uphold racist laws – such as the laws over immigration controls.

They believe most crime is concentrated in the inner cities, so black people are viewed as potential criminals and are subject to constant harassment.

This institutional racism can be seen in the way that black and Asian people who work in the force are treated.

The police’s racism and violence is not a case of a few rotten apples – it is an intrinsic part of the police force.

Meanwhile, regular police officers are pulled from the working and lower middle classes.

Of course, some people join thinking they will be able to make a positive difference to society.

But those from working class backgrounds have to show that they are willing to adapt to the police’s role. This means taking a hard, bullying attitude to the working class.

We are told the role of the police is to ensure that all people live peaceably together.

In reality the police exist to protect one thing – the status quo. 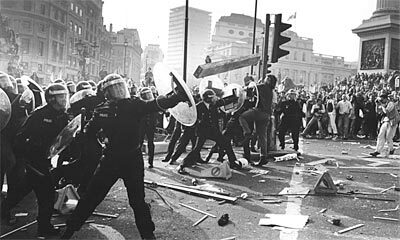 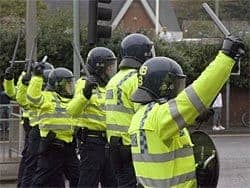 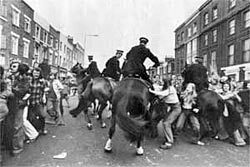 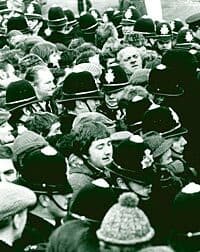