The struggle for justice continues in South Africa

This article is over 15 years, 7 months old
In the days leading up to the 30th anniversary of the Soweto uprising, young people have been urged by the government to take part in nationwide commemorations.
By Percy Ngonyama
Downloading PDF. Please wait...
Saturday 17 June 2006

In the days leading up to the 30th anniversary of the Soweto uprising, young people have been urged by the government to take part in nationwide commemorations.

The 2006 “apathetic” youth has been heavily criticised for their disregard of important national events.

It is normal to assume that the Soweto uprising was triggered solely by the use of the Afrikaans language in schools – widely seen by most black people as the language of the oppressors.

But the youth of ’76 took to the streets also to protest against inhumane living conditions and the racist policies of apartheid’s “Bantu education”.

Thirty years on, and 12 years since the advent of the much talked about 1994 “miracle” elections which saw Nelson Mandela become president, for many young people, very little has changed.

The appalling conditions in the townships have worsened. Youth unemployment has reached crisis level. For many young people who are HIV positive and – as is usually the case – poor, there is no hope.

Life saving antiretroviral drugs are only available to a fraction of infected persons at public medical institutions.

The majority of black schools are still without basic necessities, such as electricity, and water, let alone computer and science labs. Most schools in the public sector have had to drastically increase their admission fees to cope.

Despite the serious predicaments facing our young people, the government has prioritised multi-billion dollar projects, such as the elitist Gautrain rail link, the corrupt arms deals, the 2010 soccer World Cup and the ecologically destructive Coega industrial development and port project.

Faced with a serious unemployment catastrophe, the government has introduced the Extended Public Works Programme (EPWP)

This much-touted programme hopes to create one million jobs between 2004 and 2009. Some 30 percent of these employment opportunities will be allocated to young people.

However, the EPWP is marked by very serious shortcomings. The jobs are temporary and pay next to slave wages. In some parts of the country, workers are reportedly getting paid an insulting £28 a month.

The government would be well advised to embark on a massive recruitment drive of young people to build hospitals, clinics, schools, houses, roads, creches, centres for abused and battered women, and other such urgently required public infrastructure.

How about recruiting the youth for training as nurses, teachers, police officers and social workers? This would create a lot of decent employment opportunities for young people.

Eight million of the economically active population are unemployed – meaning they have no form of income. Some 70 percent of these are young people. Given this sad situation, one need not be shocked by increasing incidents of criminal activities involving young people.

The government hopes to deal with the symptoms and not the causes. During his 2006 state of the nation address president Thabo Mbeki announced a plan to increase resources allocation within the justice system to ensure, in his words, that “crime does not pay”.

Many sociologists are agreed that the majority of so-called “criminals”, a sizeable percentage of whom are young delinquents, languishing in our prisons are there because of “poverty related” crimes.

Without a doubt, the youth of 2006 needs to revitalise some of the protest methods employed by the 1976 young generation to fight the current system.

Young people do not take part in national events, not because of “apathy” as widely purported by politicians and some youth formations, but because of disillusionment and very justified anger at South Africa’s new rulers.

The only voice the rulers ever listen to now is that of financially well-endowed capitalists and financial markets calling on them to implement more “trade liberalisation”.

For real change to be realised, young people need to follow the recent example of the French youth who have united and successfully prevented the implementation of pro-business labour laws.

Our experience also tells us that mass protest, and mass based campaigns, is the only language governments and the capitalists understand.

The 1976 generation did not lay down their lives for the current criminal neo-liberal “paradise”.

The 1976 anniversary should be used as a platform to relaunch and intensify young people’s struggles for a genuine “better life for all”. A step in this direction is the Right to Work Campaign that seeks to make unemployment “public enemy number one”.

This is being launched in Cape Town from June 13-16, at a conference to be addressed by various prominent national and international social movement activists and trade unionists.

Percy Ngonyama is a social movement activist based in Durban 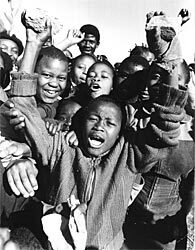 When Soweto rose up

We need to complete what they began with the Soweto uprising