This article is over 12 years, 3 months old
In our second column Adrian Budd looks at Phil Piratin and the battles of the 1930s
Downloading PDF. Please wait...
Tuesday 20 April 2010

Phil Piratin won Stepney’s Mile End seat in east London for the Communist Party (CP) in 1945 with over 5,000 votes.

His victory was the culmination of a decade of organising around working class struggles.

One major battle was against Oswald Mosley’s British Union of Fascists (BUF) in the mid-1930s.

Its high point was the Battle of Cable Street in 1936, when more than 100,000 people prevented the BUF from marching through the East End.

This was the turning point in the fight against British fascism in the 1930s.

Piratin noted that while the East End was physically unchanged, people’s “heads seemed higher, and their shoulders were squarer…the ‘terror’ had lost its meaning.

“The people now knew that fascism could be defeated if they organised themselves to do so.”

Yet the misery and squalor of life in the slums of the area meant unemployed people were targets for the fascists.

The lack of fight from the Labour Party and trade union leaders reinforced this danger.

Piratin argued that anti-fascist propaganda and street battles were insufficient to defeat fascism.

The key task was to develop deeper roots within the working class by taking up issues that directly affected workers’ daily lives.

The CP threw itself into battles around housing. It organised tenants to demand repairs, redecoration, better communal lighting and rent reductions.

It established local activist groups to defend neighbours threatened with eviction by bailiffs.

It organised successful rent strikes. On May Day 1939, 100,000 people from five rent strikes marched in Stepney.

When it organised an estate to defend two fascist-supporting families from eviction the families tore up their BUF membership cards.

The Stepney Tenants Defence League that emerged in 1937 from these struggles was a huge success. Through it “tens of thousands of working class men and women” learned how to organise themselves and lead struggles.

Under CP leadership, the Stepney experience was emulated in many other cities.

The routine day-to-day activities knitted together a huge network of supporters and gained the CP deep respect among Stepney’s workers.

This underpinned Piratin’s success in Stepney’s 1937 council elections, when he became the CP’s first London councillor. But he was not seduced into believing that he had found a route to power:

“The main political arena was not the council. The political issues were decided in the streets and in the homes, among the people,” he said.

When the Second World War broke out in 1939 the CP found itself torn between the requirements of Stalin’s foreign policy and building a united working class fightback.

In industry the party often insisted on productivity increases and no strike deals.

But in working class communities the party continued to fight for workers’ elementary interests. During the Blitz it led the campaign to replace feeble above-ground air-raid shelters with the underground shelters found in richer parts of London.

Piratin organised an invasion of the Savoy hotel’s luxury shelter. The resulting publicity added weight to the CP’s campaign of mass invasions of tube stations, which were eventually opened as deep shelters.

Labour swept to victory in 1945. But in Stepney it was Piratin who captured the mood for change and he became the CP’s second MP.

He was helped by the local Labour Party, whose leader dismissed the vote for Piratin, a Jew, as a vote by “people of alien origin”.

But the CP would not have won without consistent work within the local working class community over the previous decade.

Unlike his Labour counterparts then and now, Piratin did not then betray his working class constituents.

He did not believe that real change comes from parliament.

Once elected, the role of socialists is to promote and support working class struggle.

Piratin is an inspiring example of how consistent work among working class communities can strengthen and build the left. 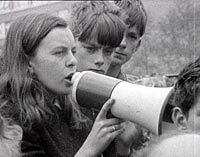