The West’s imperial disaster in Afghanistan

Protests erupted across Afghanistan last week after copies of the Quran were found in an incinerator at Bagram, the biggest US base in the country.

Protesters were killed as they torched police cars and attempted to storm the airbase and other symbols of foreign occupation.

And a man in an Afghan soldier’s uniform killed two US troops on Wednesday of last week. Barack Obama was forced to apologise for the scandaland has promised an “investigation”.

But there are serious concerns about what the protests will mean for the future of the bloody US-led occupation.

This week more than 20 Afghan MPs called for foreign forces to be driven from the country.

And Afghan president Hamid Karzai has publicly criticised the US strategy repeatedly over the past ten years.

The invasion, which started at the dawn of the “war on terror”, has been a disaster for the Afghan people—and for imperialism.

After the September 2001 terrorist attacks in New York, president George W Bush argued that the Taliban in Afghanistan were sheltering the culprits—Al Qaida.

So the Taliban, previously US allies, became the enemy.

The central concern for the West is that anti-occupation forces, particularly those outside of Taliban control, will find a larger audience and be able to voice popular anger.

The occupation has destroyed the country. Contrary to promises of improving lives, things have got far worse for many Afghans.

This is particularly true for women, who were at first told that the war was precisely for them.

Just 12 percent of women and girls in Afghanistan are literate.

Maternal and infant mortality rates remain high and, with increasing internal displacement, many women now live in slums and give birth without medical help amid raw sewage.

The United Nations has warned of the high risk of infection in the country.

This winter made a desperate situation even worse. Some 400 people are internally displaced every day as they flee fighting and poverty, according to Amnesty International.

Afghanistan was presented as the good war—to remove the Taliban and let the Afghan people decide their futures. But in reality it is Western imperialism that wants to decide the future of Afghanistan and the region.

Instead of democracy they installed the corrupt puppet Karzai. He and his clique of warlords have sucked money out of the country to line their own pockets.

US and British forces presided over and institutionalised this corruption.

The war has caused huge divisions in all the ruling classes involved. Its deep unpopularity at home collided with an unwinnable conflict abroad. And civilian and military deaths are rising all the time.

Afghanistan is poor and has no oil and. Over 78 percent of the country’s income comes from its meagre agricultural output.

But it has been fought over by various imperial powers for hundreds of years.

Imperialism is not just about controlling resources like oil. It is also about superpowers fighting to gain economic and political influence.

Bush and Tony Blair sought to impose the will of the West in a country that has the misfortune to find itself at an important strategic location.Barack Obama and David Cameron want to do the same.

Imperialism has been a major factor in determining the shape of the world for more that 150 years. The driving force behind it is competition between major powers.

This is central to the mechanics of capitalism, which relies on the constant drive to accumulate raw materials and profits. Ruthless competition has been the basis of capitalism since its birth.

Today, both Labour and the Tories see British capitalism’s best interests served by a junior partnership with US imperialism.

This is why British troops are in Iraq and Afghanistan. The Western powers continue to eye other countries for intervention—Syria and Iran at present—while troops remain in Afghanistan, Iraq, Libya and dotted all over the globe.

It is right to stand against Western intervention at all times.Recent history has vindicated anti-imperialists time and again.

But in order to remove the shadow of war and imperialism from the world we must destroy the system of competition and crisis that lies at its heart. 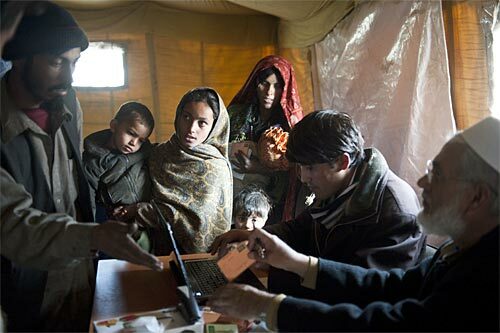 Guy Smallman's photos of Afghanistan - a country devastated by war