Then we fought for freedom—now it’s social rights. The two belong together

This article is over 17 years, 2 months old
Hans-Jochen Tschiche was active in the East German opposition. Socialist Worker’s German sister paper Linksruck spoke to him about the Monday demonstrations of autumn 1989 and autumn 2004.
Downloading PDF. Please wait...
Saturday 13 November 2004

In 1989 you helped organise the Monday demonstrations. What were the goals?

It was above all about democratising society. We wanted the rights of individual liberty to be put into effect.

In October 1989 nobody was giving a thought to reunification. Many people thought if they questioned the post-war order they would provoke a war.

The Christian Democrats promised that reunification would bring flourishing landscapes.

That’s what lots of people wanted to hear, and they believed it. Nobody told us about the deindustrialisation that was coming.

Then, after one or two years, came mass unemployment and disenchantment. People bore the tribulations of the subsequent years with astonishing patience.

The latest cuts in unemployment benefits were plainly the straw that broke the camel’s back.

Of course the movement today isn’t the same as then. Then it was about freedom. Today it’s about social rights. But freedom and social justice belong together.

People have the feeling that nobody is listening to them. They would like the world and the political possibilities to be very different.

Many have the feeling that the powers that be can do what they like with them. Politicians appear helpless in this situation. They create the impression that they do what the bosses want.

In 1989 many looked to the social market economy as better . What alternatives are being discussed today?

I think that the time of the socialist idea is not over yet. The demand for social justice is still unmet.

I think there is room to the left of the Social Democrats. We need a left wing party. Every European country has one—we need one in Germany too. 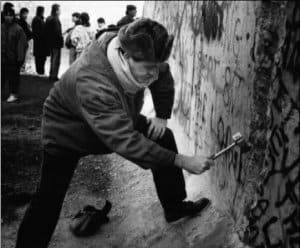 East German activists: 'We tore down the dictators'