‘There is no such thing as free hospitals – or flushing toilets’

This article is over 12 years, 0 months old
Leah Gordon visited Haiti last month, before the earthquake. She spoke to Socialist Worker about life there
Downloading PDF. Please wait...
Tuesday 19 January 2010

Haiti is a country of peasants. There is very high unemployment and very low wages. People always seem to be working, but it’s mostly in the unofficial economy.

Haitians seem to make most of the tourist items that are then sold in Barbados and the Dominican Republic – wooden statues and the like. It’s all made in labyrinths of alleyways where there are small workshops set up.

Meanwhile, the amount of money sent back by Haitians living abroad is greater than the entire GDP of the country. One person working overseas can be supporting 50 people in Haiti.

What impact does poverty have?

It’s very hard for people. The school fees for a child in Haiti are something like $200 a term – and that’s in the poorest of the poor neighbourhoods.

There is no such thing as free education or free hospitals. There aren’t even flushing toilets in the popular neighbourhoods – just holes that get filled with excrement.

People spend their lives constantly trying to avoid setbacks. Even though it’s difficult you can more or less survive – but then if you have a relative who gets sick or if you’re injured and can’t work then you’re knocked back. That has a domino effect on your whole family.

Why is Haiti so poor?

I think that history is important. Haiti became the first black republic after an incredible and powerful revolt against slavery. But Britain, France, Spain and the US also had slavery and they refused to trade with Haiti. It was a country that couldn’t be seen to succeed.

Haiti has been continually demonised – even Channel 4 news last week described it as a country beset with “black magic”. I think that the culture has been demonised because the great powers want to rubbish the political forces of the slaves’ revolt.

The French demanded that Haiti pay them reparations for money “lost” because of the end of the slave trade. Haiti has been in debt ever since.

What’s happening on the ground after the earthquake?

People are just trying to find their loved ones. I’m very scared because in a few days the water supplies will run out.

I can’t even begin to understand what it must be like there and what people are suffering.

I heard that the general hospital is totally flattened. That’s the only hospital for poor people in downtown Port-au-Prince. Where will the injured go?

What do you think will happen now?

As usual, I don’t think that the mass of the people will be involved rebuilding the country. I can imagine that there are sections of the capitalist class rubbing their hands together right now thinking about all the contracts and building deals they’re going to get.

Some people will make a fortune out of this. 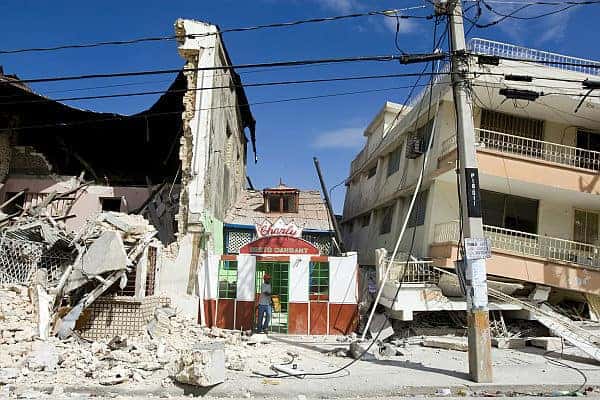 How US imperialism has devastated Haiti

Money for Haiti - not war and bankers

Haiti: the real looters are sitting in Washington

Don’t worry, the ‘murdering maniacs’ are on the way

Aid delayed by US interference

Living it up next to disaster zone

Donate to the disaster relief

How much is given in figures