Things get sticky for the occupiers

This article is over 18 years, 10 months old
Alex Callinicos looks at how things are starting to go badly wrong for US and British forces two months after the official end of the war
Downloading PDF. Please wait...
Saturday 05 July 2003

ALL THE blustering of Alastair Campbell and his chorus of tame ministers and Labour backbenchers can’t conceal the fact that the Iraq war is turning very nasty for its perpetrators. The row over the fact that George W Bush and Tony Blair lied their way to war wouldn’t be half so bad if the situation on the ground in Iraq weren’t becoming so serious.

One occupying soldier has been killed in action every other day since Bush proclaimed ‘victory’ on 1 May. The most significant thing about the shooting of six British military policemen last week was where it took place. Up to then most of the fighting since the fall of Baghdad had been in that city and the surrounding area in central Iraq. The main faith in central Iraq is the Sunni version of Islam, to which Saddam Hussein belongs.

Paul Bremer, the American proconsul in Iraq, on Sunday repeated the occupiers’ line that ‘remnants of the Ba’athist regime’ are responsible for the attacks. The US intelligence consultants Stratfor declared recently that ‘the United States is now clearly involved in a guerrilla war in the Sunni regions of Iraq… Suddenly, the question of Hussein’s whereabouts ceases to be irrelevant. Are Hussein and his lieutenants operating the war from a bunker somewhere?’

But what happened last week suggests something much more frightening for Bush and Blair. The British military police were killed far from Baghdad, in Majar al-Kabir. This is a town in southern Iraq that borders on the great marshes that Saddam had drained to crush guerrilla resistance to his rule. The people of Majar al-Kabir are Shia Muslims, who are dominant in the south and make up the majority of the Iraqi population. It was people in the Shia areas who rose up against Saddam at the end of the 1991 Gulf War and were brutally crushed for their trouble.

The Pentagon and its Iraqi stooges predicted that the Shias would rise up to welcome the American and British invaders this time. They didn’t, of course, but the theory has persisted that they are better disposed to the occupation forces than the Sunnis in central Iraq.

We were also told that the British troops were better at handling the natives then the clumsy and aggressive Americans.

But it will, I’m sure, come as no surprise to people from the north of Ireland that it was a series of brutal and insensitive arms searches by the Parachute Regiment that provoked the fighting in Majar al-Kabir. No one should imagine that this was a one-off incident. On Thursday last week an American marine was killed in Najaf, one of the holiest Shia places in southern Iraq.

The truth is that Iraq is a large and complex country with a population that has a variety of different ethnic, religious, political, and social traditions. Among these traditions is something Americans should be able to relate to – men regard it as their right to bear arms. They have had plenty of chances to practise as well, what with the Gulf wars and the guerrilla fighting in the Kurdish areas and the marshes.

Saddam sought to crush this lively and complicated people. He failed. It was astonishing how rapidly the Shia in particular emerged with their own powerful organisations once Baghdad had fallen to the Americans.

Now the Iraqi people face an occupation army that is unable to offer them basic security or public services, but denies them the right to rule themselves, and is seeking to disarm them. This is a very, very dangerous situation for the occupiers.

The Financial Times on Monday quoted James Dobbins, a former presidential envoy with much experience in American efforts at ‘nation-building’: ‘Mr Dobbins says the current force level [in Iraq] of about 175,000 is insufficient and estimates that a more realistic level is about 300,000. If the US had to provide almost all of these forces itself, the effect on American military resources would be catastrophic. With rotation in and out of the theatre, that would mean almost a million soldiers largely committed to Iraq, says Mr Dobbins – virtually the US army’s entire strength.’

Already over half the Pentagon’s deployable troops are engaged in active service in Iraq, Afghanistan, Bosnia and Kosovo. No wonder that even Donald ‘I don’t do diplomacy’ Rumsfeld is talking about an international peacekeeping force.

Some states eager to ingratiate themselves with Washington have sent troops to Iraq – Poland has even taken charge of a region in the north. But I doubt if even the most toadyish East European regime would be willing to accept serious casualties.

Maybe Iraq really will become the quagmire that the US’s leaders have desperately sought to avoid for the past 30 years.

‘Was it worth it? Ask the child who lost his family’

History of a place called Baghdad 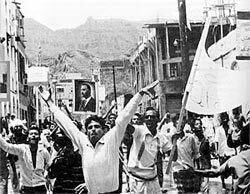