This article is over 17 years, 1 months old
This affects all workers I HAVE worked as a reception class teacher for 22 years. The government is now talking about making me look after 25 four year olds until I’m 65.
Downloading PDF. Please wait...
Saturday 18 December 2004

I HAVE worked as a reception class teacher for 22 years. The government is now talking about making me look after 25 four year olds until I’m 65.

I’m 48, two years below the age over which people will not be affected by these changes.

There are hundreds of thousands public sector workers in the same position as me. I have never known such a major attack on our conditions.

The biggest scandal of all this is that we have paid our contributions and kept our side of the bargain. Now we are being told we will have to work for five more years and see our life expectancy drastically cut as a result.

My local branch of the NUT union is very active over this issue. I want to see that reflected at the top of every union. Workers across the public sector should be campaigning together and striking together.

If we did that early next year it would send a powerful signal to the government in the run-up to the general election.
Julia Simpkins, Bolton

CIVIL SERVANTS are not alone in facing attacks on their hard-earned pensions.

Local council workers have been informed that from this April we will no longer be able to retire at 60. If we want a full pension we will have to work on to 65 .

Unison union leaders hope that by lobbying Labour they may get these changes delayed until after the election.

But we can’t afford to delay in organising to resist.

GORDON BROWN got a taste of the kind of anger that should greet every government minister when he spoke in Kirkcaldy, in his Scottish constituency, on Friday of last week.

Members of the PCS civil service workers union and others protested outside the venue. Four members of the Scottish Socialist Party managed to challenge Brown as he began to speak.

Sasha Callaghan, a mother of five whose partner is a local civil service worker, marched up to him and registered her disgust at the government’s attacks on pensions and civil service jobs.

Sasha said, “When he started speaking, that was it—I just couldn’t stop myself. My family have been under unbearable pressure.”
Louise McLeary 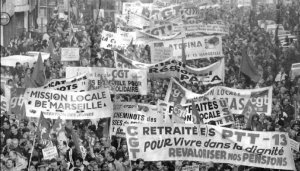 This is how we can defend our pensions