This article is over 18 years, 10 months old
THE PICTURE of Tony Blair being chauffeured away from parliament said it all. On Wednesday of last week, looking stunned and struggling to keep a stiff upper lip, Blair resembled no one more than Margaret Thatcher in November 1990, as she scuttled away after her resignation.
By Kevin Ovenden
Downloading PDF. Please wait...
Saturday 08 March 2003

THE PICTURE of Tony Blair being chauffeured away from parliament said it all. On Wednesday of last week, looking stunned and struggling to keep a stiff upper lip, Blair resembled no one more than Margaret Thatcher in November 1990, as she scuttled away after her resignation.

The mass revolt against the poll tax did for Thatcher. Now serious commentators speculate whether war on Iraq is doing the same for Blair. The scale of last week’s rebellion in the House of Commons was unprecedented. Some 121 Labour MPs voted against the government and for a resolution saying the time was not right to go to war.

That was despite immense pressure from Labour whips (enforcers) to toe the line. Ninety six Labour’s MPs are part of the government-ministers and their bag carriers. Leaving this ‘payroll vote’ aside, the revolt approached 40 percent of Labour MPs who voted.

The rebellion was a direct result of the mass anti-war movement, which produced the biggest demonstration in British history three weeks ago. Left wing Labour MPs told Socialist Worker that the demonstration and intense public lobbying had led many backbenchers ‘to discover that they have been anti-war all along’.

Oxford academic David Butler said of the size of the rebellion, ‘There has been nothing remotely comparable in the past 100 years.’ The rebellion is greater than any that took place during the 1964-70 or 1974-9 Labour governments.

And it is over an issue – war and international crisis – that is far more profound than the trigger for previous rebellions. There was no such division inside the Labour Party on the eve of the First World War, the Second World War or the 1982 Falklands War. That’s why there is talk not merely of whether there will be other sizeable votes in parliament against attacking Iraq, but speculation about whether tensions inside the Labour Party will crack wide open.

The Labour Party could now be heading for its biggest crisis since 1931. In that year the Labour government of Ramsay MacDonald was torn apart by the worldwide economic slump triggered by the Wall Street Crash. Bankers and industrialists demanded swingeing cuts to unemployment benefit just as millions were thrown out of work.

MacDonald’s cabinet, defying pressure from the TUC, narrowly voted for a 10 percent cut in welfare benefits. But the slim majority in the cabinet was not enough for the bankers, who wanted a government that was unswerving in squeezing workers.

MacDonald and his chancellor, Snowden, broke with the Labour Party to form a National Government with the Tories and the Liberals in August 1931. Buckingham Palace announced that MacDonald ‘tendered his resignation as prime minister of the Labour government, which the king accepted.

‘The king then invited him to form a National Administration. Mr MacDonald accepted this offer, and kissed hands as his appointment as the new prime minister.’

Tony Blair, today, does not head a national government but is openly relying on the Tories to drive support for the war through parliament. That is fuelling the sense of crisis within the Labour Party. And it is leading increasing numbers of people to ask fundamental questions about the lack of democracy in Britain that enables Blair to launch a deeply unpopular war.

Last week’s vote was far from a glorious ‘vindication’ of parliamentary democracy, as every paper and leading politician claimed. If parliament were truly democratic it would have reflected the balance of public opinion over the war. Two thirds of MPs would have voted against it. Instead two thirds backed attacking Iraq.

We would not be in a situation where 40 percent of the British army has been dispatched to the Gulf before MPs have even voted for a war. The debate would not have opened with Jack Straw speaking in favour of war, followed by Tory Michael Ancram responding in favour of war, followed by the Liberal Democrats whose official position is that war will be acceptable if George Bush can bully and bribe the UN into backing it.

And the question for debate would be, as it is in every corner of Britain, for or against war, not some form of words designed to avoid the central issue.

THE WHOLE structure of parliament is designed to ensure that official political debate is kept within narrow confines and that major decisions can be taken in defiance of popular feeling.

At the beginning of the 19th century the mechanism for excluding the vast majority of people from any say over what the government did was very crude. Only the rich were allowed to vote.

A ‘liberal’ historian at the time said giving everyone the vote ‘would be fatal for all purposes for which government exists’ and would be ‘utterly incompatible with the existence of civilisation’.

Massive popular agitation for the vote led to the gradual extension of the number of people allowed to take part in elections. But extending the franchise did not mean opening up the centres of power to popular control.

These rested in the ownership and control of industry itself, and the hierarchies of the military and civil service, the police and the judiciary. None of these were or are open to election.

Nor are MPs really accountable. Except for waiting for the next election in several years time, there is no mechanism for voters to turf out their MP when he or she fails to reflect overwhelming public feeling. The voters of Blackburn may be 80 or 90 percent against the war. But ‘their MP’ Jack Straw can still vote to back Blair.

In these circumstances parliament, rather than being a mechanism by which mass pressure is applied against the ruling class, is a mechanism for taming the representatives of mass feeling.

Gladstone, the leader of Britain’s main capitalist party at the time – the Liberals – expressed in 1867 ‘the desirability of encouraging a larger share of the population to feel the centre of its political attention should be parliament’.

Socialist historian Ralph Miliband has written that the politicians’ vision was that ‘a carefully and limited and suitably controlled measure of democracy was acceptable, and even from some aspect desirable. But anything that went beyond that was not.’

As more and more people got the vote, parliament itself made fewer important decisions. Great rows that split the establishment in the 19th century were debated out in parliament when the mass of workers were not even allowed to vote for MPs.

So the argument over free trade versus protectionism was debated in parliament by people directly representing different wings of the ruling class.

But by the 20th century decisions were more likely to be taken within unaccountable bureaucracies, or involving the senior political leaders in the Tory and Liberal parties.

The election of independent labour candidates in 1905 and the formation of the Labour Party marked a huge step forward. It broke a 40-year monopoly of the two openly capitalist parties over working class politics. But the mechanisms that insulated the centres of power from democratic control affected the Labour Party too, right from the start.

And as time has gone on, each Labour government has adapted more and more to running the system. If opposition to war is confined to parliamentary votes, there are very many ways in which the government can get its way, despite the feeling of the overwhelming majority of people.

The significance of last Wednesday’s vote lies above all in the extent to which it encourages the anti-war movement outside parliament. More and more people are asking why decision-making should be left to an institution that is as undemocratic as parliament. That raises deep questions, not least for the Labour Party.

Why bailing out General Motors could help the environment 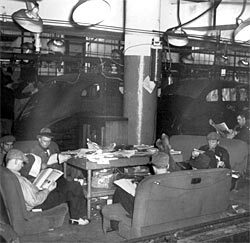