Thousands thrown out of work by the crisis

Over the last three months, 60,000 more people in Britain have become unemployed. This massive rise takes the unemployment total to 1.67 million.

The British Chamber of Commerce warned on Monday of this week that unemployment could rise to two million in the next few years as Britain’s economy is battered by the global economic crisis.

All this has added to the widespread fear that Britain is entering a recession.

According to the government, people are out of work because they are trapped in a “dependency” culture on benefits and are unwilling to get a job.

But the current surge in unemployment shows that the system, and not individuals, is to blame for people being out of work.

The construction, manufacturing and finance sectors have been particularly hit by the crisis.

There were 37,000 less jobs in manufacturing industries between April to June than in January to March.

The building and finance sectors – including the now government-owned Northern Rock – have already announced more than 10,000 job cuts since the end of June. Many more are predicted.

A similar picture is emerging across Europe. Germany, the continent’s largest economy, shrank by 0.5 percent over the last quarter – its first decline since 2004. Unemployment is up in France and Spain.

Governments seek to blame the unemployed rather than question the system they uphold.

So in Britain unemployed people are coming under a sustained attack.

New Labour has drawn up a number of plans to get people off benefits and into work.

Its proposals include forcing parents to look for paid work when their youngest child is seven, making people receiving Job Seeker’s Allowance (JSA) work in return for their benefits and taking “legislative powers” to force people into “training”.

A life on poverty benefits is, of course, not a good thing, which is why people do not choose to be on benefits.

For all the propaganda about how people on benefits are “scrounging” off the state, the amount of money that those out of work receive is disgracefully low.

JSA is available for those “available for and actively looking for work”. It ranges from a mere £35.65 to £59.15 a week for single people and lone parents. The maximum a couple can receive is just £92.80 a week between them.

People who are unable to work for various reasons, such as childcare, caring responsibilities, or because they have a disability, can receive Income Support.

The value of this varies depending on circumstances.

Jackie Bagnall from Leeds receives Income Support as she is unemployed.

“I had to leave my job because I can’t walk or stand for very long.

“But when I applied for incapacity benefit I was turned down.

“My son turns 16 in two weeks and then they’ll stop my benefit. I’ll have to apply for JSA even though I’m not fit to work.

“There’s all this talk about making sure you feed your kids enough fruit and vegetables.

“But if you’re on Income Support you’ve got no chance of doing that.

“I end up buying cheap tins of beans or spaghetti and cheap bread to try and last from week to week. I can’t buy things like moisturiser.

“As soon as I get my money on a Tuesday it all starts again. By Friday I have £2 to last me over the weekend.

“I’m going without food. If I eat anything then there won’t be enough to feed my son. I panic about running out of food every week.”

The government’s latest proposals will do nothing to help people in situations such as this.

Its approach relies on a few key assumptions – for example that work is available and that it is the way to cut poverty.

Job vacancies now stand at their lowest level in over a year and a half.

Some 126,000 people were made redundant between April and June.

It is also false to claim that getting more people into work will reduce poverty. Over half of all children in poverty have a parent in work.

Workers, like the unemployed, are seeing their living standards attacked as pay rises are failing to keep up with inflation.

Unemployed people are victims of a system that continually plunges into crisis and puts the pursuit of profit above all else.

The government’s proposals are not about helping ordinary people.

They are about making ordinary people, working or not, pay for the bosses’ crisis.

We have to stand against the scapegoating of unemployed people and not allow our rulers to divide us.

Increased poverty forces us out of retirement

The latest employment figures, while showing a steep rise in unemployment, also showed that the number of those in employment rose by 20,000.

The major reason for this is that 25,000 more people over the retirement age are now working than were three months ago – reaching a record 1.3 million. If it wasn’t for this factor, the total number of people employed would have fallen.

Attacks on final salary pension schemes, the devaluing of private pensions, the rising cost of living and falling house prices are leading to pensioners returning to work just to make ends meet.

These people are being forced out of retirement by poverty. But work is not a guaranteed route out of this. There is not an abundance of well-paid, secure jobs for those on benefits to take up.

The Poverty Site, supported by the Joseph Rowntree Foundation, found that almost half of men and a third of women making a new JSA claim had been claiming the benefit less than six months previously. The jobs they had found were not secure.

How the government massages unemployment figures

The government only classes those in receipt of JSA as officially being unemployed.

Its classification of unemployment does not include people who are defined as “not actively seeking work” or those who are unable to begin work within two weeks.

This excludes millions of people who are out of work.

So, in 2007 around five million people received an out-of-work benefit.

Almost three million were sick or had a disability, and three quarters of a million were lone parents. These are not officially defined as unemployed.

But even the government’s preferred official unemployment figure of “claimants” – those receiving JSA – is soaring.

Those claiming unemployment benefits rose by over 20,000 between June and July.

Charter’s demands can bring people together

The People Before Profit Charter was launched in response to the economic crisis that is spreading across the globe.

It supports the action taken by workers to defend their pay, jobs and services and puts forward a series of demands to stop working class people paying the price for the crisis.

Job insecurity for workers and growing poverty among pensioners are just two of the effects of the crisis that are reflected in the latest employment figures.

Point seven of the charter demands that tax on fuel and energy is cut for old people and the poor, and that the link between pensions and earnings is restored.

The soaring cost of fuel means that unemployed people and pensioners in particular are seeing their standard of living fall dramatically.

Building campaigns around the demands of the charter can bring together ordinary people, whether they are working or not, and build a force to make the bosses pay for their own crisis.

For full details of the charter and how to sign it go to » peoplebeforeprofit.wordpress.com

Marxism 2003 event shows what is possible 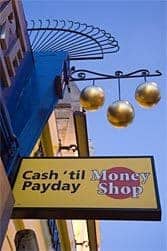 Money shops: Pushing us into the red