This article is over 11 years, 1 months old
Tony Cliff, founder of what became the Socialist Workers Party, was a tireless fighter for socialism – here Ian Birchall, author of a new biography of Cliff, tells his story
Downloading PDF. Please wait...
Tuesday 21 June 2011

Tony Cliff was one of the most remarkable individuals on the British left in the later 20th century. He spent his life in the struggle, from his early days as a Jewish revolutionary in occupied Palestine to when he came to Britain and founded the group that became the Socialist Workers Party.

He always fought for socialist ideas.

Many older readers of Socialist Worker will remember Cliff with affection­—and perhaps also recall the odd tongue-lashing if they disagreed with him. To younger people in the SWP, or involved in joint activity with us, he may be just a name.

Cliff (originally called Ygael Gluckstein) was a Jew, born in Palestine in 1917. His parents were very much part of the Zionist community.

Even as a child, Ygael had a passion for equality. He was shocked that there were no Arab children in his school.

That shock set him on the road to being a revolutionary.

He didn’t break with Zionism immediately. He joined a left wing Zionist organisation, and at the same time began to question the disastrous policies of Stalin’s Russia.

He read some of the writings of Russian revolutionary Leon Trotsky.

His first article, written at the age of 18, was an attempt to apply Trotsky’s theory of permanent revolution to Egypt.

In 1938, along with a few comrades, he set about building the Revolutionary Communist League. It never had more than about 20 members. But it contained both Jews and Arabs and tried to offer a socialist internationalist alternative to Zionism.

Cliff also wrote a book, never published, on revolutionary prospects in the Middle East. Long totally unknown, this work is now available on the web at http://bit.ly/probme.

He married socialist Chanie Rosenberg, who was to be his close companion for over half a century and who remains active in the SWP today.

In 1946 they moved to London, to fight imperialism at its core. But the British authorities did not make Cliff welcome. For four years he lived in Ireland, separated from Chanie and their first child.

Cliff joined the British Trotskyist organisation, the Revolutionary Communist Party. But throughout the world Trotskyism was in crisis.

The analysis Trotsky had left at his death did not fit the post-war world.

As Cliff used to put it, it was like finding your way round the Paris metro with a map of the London tube.

In particular Cliff was caught up in the debate about the nature of Russian society under Stalin.

Was it some form of workers’ state, in a distorted form, or had the heritage of the 1917 revolution been destroyed? Cliff came to the conclusion that it was state capitalist and wrote a long document—later a book—to prove this.

It was a scholarly work, based on extensive research into Russian society and full of references to Marxist theoreticians.

A Russian worker was a victim of the same system as a worker in Britain.

In 1950, Cliff and his followers were thrown out of the Fourth International. Thirty-three people (some of whom didn’t last long) formed a new organisation, the Socialist Review Group.

Through the 1950s they merely survived, working in the Labour Party and producing a small paper.

In 1953 Cliff’s brother-in-law, Mike Kidron, came to England. For over ten years they were a formidable intellectual combination, developing an understanding of a changing world.

Around 1960, things began to change. The Campaign for Nuclear Disarmament and the newly-launched Labour Party Young Socialists were bringing a new generation into politics who hadn’t known the defeats and illusions of the 1930s and 1940s. Cliff worked tirelessly to win some of these young people.

When researching my book, I met a number of people who were inspired by Cliff and who remain active socialists, whether in the SWP or elsewhere, to this day (see box, left).

When the Labour government was elected in 1964, Cliff wrote a short book on incomes policy and anti-union laws, which proved very popular among militant workers.

The events of 1968, with the student revolt and the general strike in France, enthused Cliff.

For over 20 years revolutionaries had been isolated. Now there was a chance to build the International Socialists, as the group was now called, into an open revolutionary party.

The early 1970s were an exciting time. In 1972 mass picketing won a miners’ strike and threat of a general strike freed five dockers imprisoned under Tory laws.

And in 1974 industrial action by miners brought down the Tory government, the only time this has happened in British history—so far!

Cliff seemed inexhaustible. He travelled the country, speaking to large and small groups of workers. He wrote a pamphlet on productivity deals and helped to set up factory branches of the International Socialists.

In 1977 the International Socialists became the Socialist Workers Party.

The party played a key role in building the Anti Nazi League, which made a real impact in confronting and turning back the racist right.

Now the wave of industrial militancy was beginning to decline. With great sadness, Cliff had to argue to his own comrades that things were getting tougher and that excessive optimism could damage the organisation.

Throughout the miners’ strike of 1984–85, Cliff addressed meetings in support of the strike (picture, above).

When it ended in defeat he must have felt it was unlikely he would see a revolution in his lifetime. Yet he carried on speaking, writing and above all encouraging younger comrades.

He was still addressing meetings a few weeks before his death in 2000.

I have spent some seven years researching Cliff’s life, interviewing over 100 people who knew him at various times, and corresponding with many more. Though some now have enormous differences with Cliff and the SWP, almost everyone recognised Cliff’s positive qualities.

It would have been easy to write hagiography, to claim Cliff (and the SWP) were always right. But Cliff deserves better than that. Like all of us, he had his weaknesses and made mistakes. His ferocious defence of his ideas meant that he sometimes quarrelled violently with his comrades. I’ve tried to take a critical approach and present both sides of the arguments.

Some people may wonder why I’ve spent so much time raking over past events. I believe (as did Cliff) that we have a lot to learn from history.

At a time when universities are closing down their history departments, the socialist movement has to take responsibility for its own history. I hope my book will be a small contribution.

Tony Cliff: A Marxist for his Time by Ian Birchall is available pre-publication only from Bookmarks, the socialist bookshop. Ring 020 7637 1848 or go to www.bookmarksbookshop.co.uk.

It’s £22 in hardback or £15 in paperback. Bookmarks also stocks an excellent selection of books by Tony Cliff.

And many of Cliff’s writings are available on the Marxist Internet Archive at http://bit.ly/cliffarc 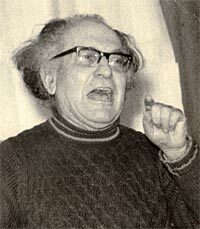 'Cliff speaks on practically everything'