This article is over 12 years, 9 months old
The world is overflowing with products that people aren't buying. The World Trade Organisation predicts that global trade will drop by 10 percent this year. Exports from Japan, the world's second largest economy, have nearly halved from a year ago.
By Simon Basketter
Downloading PDF. Please wait...
Tuesday 31 March 2009

The world is overflowing with products that people aren’t buying. The World Trade Organisation predicts that global trade will drop by 10 percent this year. Exports from Japan, the world’s second largest economy, have nearly halved from a year ago.

The most common explanation for the current crisis is that people are simply not buying enough and that underconsumption is causing recession.

That is why world leaders talk endlessly of ‘restoring consumer confidence’ and pressuring the banks to lend more money. Persuade people to start spending again, so the theory goes, and the slump can be vanquished.

Pro-capitalist commentators have for years lectured workers that if they earn and spend too much, inflation and prices will rise – and that will damage the economy. Yet these same people now tell us that because we aren’t spending enough the economy is in trouble. Either way it’s our fault.

Another version of the underconsumption theory is put forward by some left wing economists.

It starts with the fact that workers are paid less than the value of the goods and services they produce.

The economists argue that, because the capitalists take a share of that value as profits for themselves, there is not enough money to buy up all the goods that are made, and that this is the root of the crisis.

If wealth were redistributed in favour of workers, they say, we could do away with the mountains of unsold goods because there would be enough money to buy them all.

Obviously, every socialist believes that it would be better if workers got a bigger share of the wealth they have created. But Karl Marx did not share the idea that underconsumption was at the root of capitalist crisis.

He believed that this was a symptom of a far deeper problem within the system – a tendency toward the overproduction of goods and services that results from the drive to amass more capital.

Marx pointed out that capitalists are locked into competition with each other. There are endless battles for market share as they race to invest in profitable areas and produce goods for them.

Each tries to produce enough goods to capture the whole market, or as much of it as possible. This process is encouraged by the way that capitalists reinvest some of their profit in an attempt to get ahead of their rivals.

In particular, investment tends to take the form of buying up bigger, better and faster machinery.

Marx called this the ‘accumulation of capital’, and it makes capitalism the most dynamic economic system ever seen. It also makes it the most destructive.

Any capitalist who refuses to squeeze his or her workers as hard as their competitors will make less profit.

The first capitalist to invest in the new technology might be able to undercut their competitors and corner the market.

But as other capitalists rush to introduce the new technology, profits will eventually fall. And, because there is no overall plan to meet social needs, anarchy reigns in the marketplace.

Wherever there is profit to be made capitalists rush to invest in that sector. This can lead to a sudden crisis of ‘overproduction’ as unsold goods pile up.

Companies then stop producing and the firms supplying them go bust. Bosses lay off workers are laid off and other companies producing goods are hit.

So the very pursuit of profits by individual capitalists can create glut and end up reducing the rate of profit for capitalism as a whole.

An example of this process can be seen in the car industry. In recent decades there have been huge technological changes in the way that cars are manufactured.

The number of workers required to make a car from start to finish has fallen dramatically as production lines are revolutionised.

In order to complete work on cost, each firm has been forced to adopt the new, more productive technology used by its rival.

Until the onset of the recession, the number of vehicles being produced by the small number of manufacturers in Britain was greater than in the heyday of the industry in the 1960s and 1970s.

One result of the new technology was that at the beginning of the current crisis car production was already running at 30 percent undercapacity. Despite this, cars were still being overproduced.

That’s one reason why manufacturers constantly look for new innovations – both real and imagined. They hope that these will give them an edge over their competitors in a market that is already saturated.

But the glut of cars does not simply mean that firms are making more vehicles than people need – ridding the roads of inefficient and high polluting cars would benefit everyone.

Under capitalism overproduction represents the existence of a surplus of commodities that still have a use, but can’t be sold at a profit.

And as profits are squeezed, bosses attempt to cut costs by sacking workers and cutting back production. This makes it even more difficult to find a market for the goods that have already been produced, creating a downward spiral.

Things such as healthcare and pensions, which most workers take for granted, are suddenly threatened as crisis spreads across the system.

In such circumstances the irrational nature of production under capitalism can become apparent to millions, and the question of how to bring about an alternative way of organising society can suddenly appear on the agenda. 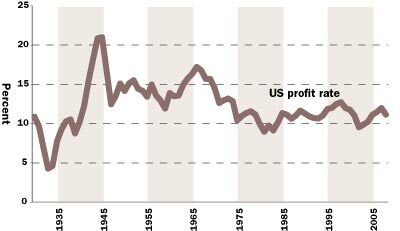