This article is over 11 years, 0 months old
Our series concludes with Trotsky’s fight to keep the flame of socialism alight
By John Molyneux
Downloading PDF. Please wait...
Tuesday 18 January 2011

The struggle against Stalinism was not confined to Russia. Leon Trotsky’s view that Stalinism was counter‑revolutionary in Russia led him to the conclusion that it would have the same effect internationally.

Trotsky criticised the policies of the Stalinist-controlled Communist International and later tried to build a revolutionary alternative to it called the Fourth International.

The notion of “socialism in one country”, said Trotsky, led Russia’s leaders to view the foreign Communist Parties not as agents of revolution in their own countries.

Instead they saw them as “border guards” for the Soviet Union.

Their main function came to be winning friends, especially capitalists and trade union bureaucrats, who would help prevent any foreign attack on Russia.

This led directly to the betrayal of two great working class struggles in the 1920s—in Britain and in China.

In Britain the 1926 General Strike was sold out by the TUC leaders. They called off the strike after nine days, without any concessions, even though it was gaining strength.

The British Communist Party failed to warn or organise against this sell‑out. This was because it was reluctant to criticise the union leaders who were in an alliance with their counterparts in Russia.

In China in 1925-27 there was a revolutionary working class movement, with the Chinese Communist Party as its leadership.

Stalin ordered it to subordinate the movement to the nationalist Guomindang party, on the grounds that China was only ready for a capitalist revolution not workers’ power.

This led to disaster when, in April 1927, the Guomindang turned on their partners and massacred the Communist Party, along with the best militants of the working class.

Trotsky subjected both these episodes to detailed critique.

Even more disastrous, however, was the Stalinists’ policy towards fascism.

Just as Adolf Hitler started to gain ground in Germany in the late 1920s, Stalin embarked on forced industrialisation and collectivisation of agriculture in Russia.

This cost the lives of millions of workers and peasants. As cover for this brutal policy he used an extreme “left” rhetoric about an immediate transition to full socialism.

On Stalin’s orders the German Communist Party called the Social Democrats “social fascists”. They refused to enter any alliance with them against the growing Nazi menace.

As a result the German working class was divided and unable to mount effective resistance. Hitler came to power in 1933 without a serious struggle.

Every German workers’ organisation was smashed—and all humanity paid the price.

In a series of brilliant articles Trotsky, in exile in Turkey, warned of the terrible danger and called for the formation of a workers’ united front against fascism.

In the process he also developed a Marxist analysis of fascism as a product of capitalist crisis, which remains relevant to this day.

After 1933, Stalin realised the Nazis were a threat. He did a U-turn, trying to form an alliance with governments in Britain and France.

He ordered the Communist Parties to form “popular fronts” and to restrict the workers’ movements to methods and tactics acceptable to the capitalists.

This led to a further disaster when General Franco staged a fascist coup in Spain in 1936 and was met by an uprising of the working class.

The Communists used their influence to suppress the revolution, including murdering revolutionaries.

This demoralisation of the workers and the failure to mobilise the peasants to take over the land handed victory to the fascists.

Throughout this period Trotsky and his family were subject to vicious slander and persecution by the Stalinists and to isolation by the Western elite.

Yet he never gave up fighting to preserve the real ideas of Marxism and to build a genuine revolutionary movement.

Trotsky wrote that his work in the mid-1930s was the most important in his life because he was handing over the banner of authentic Marxism to the next generation.

This, against all odds, he managed to do. And today, wherever we fight back against capitalism and wage the struggle for real socialism, we stand on Trotsky’s shoulders. 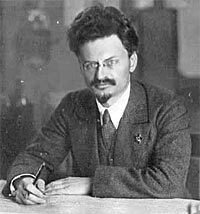 Fighting the Stalinist distortion of socialism