This article is over 12 years, 9 months old
The failings of New Labour and the trade union leaders are allowing the BNP to benefit from the economic crisis.
By Esme Choonara
Downloading PDF. Please wait...
Tuesday 14 April 2009

The failings of New Labour and the trade union leaders are allowing the BNP to benefit from the economic crisis.

Millions feel betrayed by a government that bails out the rich and expects working class people to pay the price.

New Labour has helped to whip up a climate of racism with its persecution of Muslims, scapegoating of refugees and attacks on multiculturalism.

The BNP is feeding off the fear and despair created by the recession.

It is claiming to be the real champion of “British jobs” and “British people”.

So combating the BNP means that as well as a broad campaign to expose the BNP as Nazis, we need a serious and united response to the economic crisis.

The union leaders have so far failed to offer a lead to workers being hit by the recession.

In most instances they have allowed factories to close – and pay and conditions to be cut – with only a few words of regret, rather than resistance.

In the recent strikes in the construction industry, some union leaders did worse – promoting nationalism and division through the divisive slogan of “British jobs for British workers”.

The magnificent occupations at Visteon plants and the large trade union turnout at the Put People First demo on 28 March show that workers can target the real enemy – the multinationals and the government.

The national demonstration in Birmingham on 16 May for jobs, which has been called by the Unite union, offers us an important focus for the resistance.

It can be a step towards turning fear and insecurity into anger and action – and help undermine support for the BNP.

‘Every time we expose them as Nazis we hurt their prospects’ 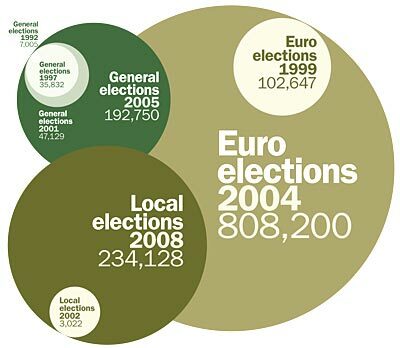