This article is over 9 years, 2 months old
‘Long live workers. Away with capitalism’ For many a highlight of the Unite the Resistance conference was hearing striking South African miner Tumi Moloi speak.
Downloading PDF. Please wait...
Tuesday 20 November 2012

‘Long live workers. Away with capitalism’

For many a highlight of the Unite the Resistance conference was hearing striking South African miner Tumi Moloi speak.

After a standing ovation, he explained the background to recent wave of struggles in the pits—and the police massacre of miners at Marikana.

“We work in 35 degree heat, with no risk allowances, no health allowances, and no proper bonuses,” he said.

“All so we can live in shacks in squatter camps that have no electricity and no running water.

“When we fight back, the police respond with a shoot to kill policy—all because they don’t want the shareholders of the mining companies to lose a penny.

“Our strike is organised by the rank and file and we have learnt not to trust the official NUM union nor the ruling ANC party.

“I want to know what happened to the ANC’s promises. They said they would create five million jobs and eradicate poverty. Yet while we are still living in shacks, the government accuses us of holding the shareholders to ransom.”

Tumi concluded by explaining that the miners’ fight was part of the global fight against exploitation. As the conference again rose to its feet to salute him, he called on them to join his chant, “Long live the workers. Away with the capitalist system.”

The hall echoed to the sound of a thousand voices.

Workshop discusses how to defend hospitals

Well over 150 people packed into the workshop on the NHS. Discussion centred on the threats to close scores of hospitals and A&E departments, and the employers’ attack on health workers’ conditions.

Raj, from the campaign to save services at Ealing Hospital in west London, described the way a grassroots campaign initiated a 5,000-strong march. Many activists in the meeting talked about similar action in their areas and exchanged ideas and tactics.

One delegate said the feeling around the NHS today is “just as it was before the poll tax campaign went massive” two decades ago.

“I expected just a handful,” she said. “But in the event, it was standing room only. People are frightened about the future—and they have good cause to be.”

There was also discussion of the serious attacks on NHS pay and conditions, including the regional pay cartel in the south west.

Other union activists explained how Unison and the nurses’ RCN union have accepted a major attack on the Agenda for Change agreement that governs terms for most NHS workers.

Uniting local campaigns into regional protests, and ultimately a national demonstration, was a common theme of contributors.

‘When we get home we’ll be doing that’

Derek, Gywneth and Chris were part of a delegation of health workers in the Unite union who came to the conference from the Bristol area. They spoke to Socialist Worker.

“We get lied to and treated with absolute contempt,” said Gwyneth. “We’ve got to organise to push from below. People can sit comfortably in their positions at the top, but we need to fight back against this austerity.”

Chris added that it was useful “to see what’s going on in all the different areas of the country and what they’re experiencing.” “The problems they have may be coming to us later on,” he said.

Pay is a big issue for health workers in the region. “The cost of living has gone up tenfold and they’re talking about reducing pay!” fumed Derek.

“With these austerity measures, the terms and conditions, we’re heading for pretty bad times. We felt at this stage it was time to get involved. It’s important to learn from everybody.

“People come up with different experiences. You think, yeah—when we get back home we’ll be doing that. We will fight. They come in guns blazing—that’s the situation we’re in. We won’t get out of this mess if our guns are in the holsters.”

Former striking miner Norman Strike told a workshop incredible stories from the miners’ strike—and particularly at the battle of Orgreave.

He told how before the strike he was seen as “salt of the earth”. But once he struck he was “a jackboot thug.”

“But they could not crush our spirit because we stood together,” he said. I’m proud of being the ‘enemy within’, I’m proud I took part in that strike.”

And he had some words of warning. “Don’t trust union leaders, they just sit and drink whisky and do nothing. It’s you, all of you—you’re?the union, not them. Organise yourselves, let’s have a fightback in this country like in Greece and in Portugal and Spain.”

“Mark was on his way home for his dinner when he was shot by the police,” she said.

“We need everyone, from all walks of life, to come together against the biggest gangs—the police and the government.”

Voices from the conference

“I think it’s been a total success. I think everybody’s learned something to take home with them. A lot of the ideas will be useful in getting more organised to keep up the fight.”

“It’s the first time I’ve been to anything like this—it’s been really interesting. We’re fighting being turned into an academy. It’s nice to hear from others around the country who are also fighting back.”

“I think it’s been a really interesting conference, good speakers from across the spectrum. There’s obviously a mood out there of people being really fed up. I think things are shifting now—they’re shifting at the bottom but it’s not being reflected at the top.”

“The government is taking the piss big time. I came here because I want to be better armed to go back into school. I want to be able to let people know what’s going on and argue with them about why we need to fight back.”

”I think that today has been very very good at bringing together all these campaigns. There’s strength in solidarity and it’s about time we all stood together and said enough is enough”

“The reason I’m here today is because I’m looking for a coalition—people coming together. I’m a retired social worker and the services that I would have referred people to you can’t anymore because they’ve been cut. I want a better future for my grandchildren.” 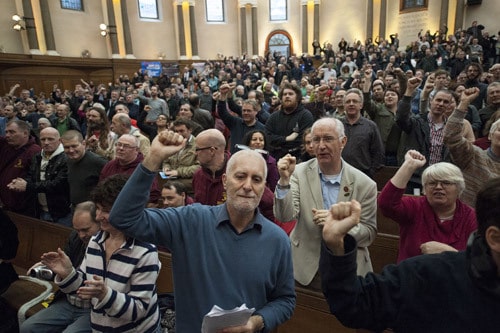 Unite the Resistance conference report: 'We all want to fight now'