This article is over 14 years, 6 months old
The post dispute is at a crucial stage, and it matters for every worker in Britain. Two hugely successful stoppages have produced not the slightest movement from Royal Mail bosses Allan Leighton and Adam Crozier.
By Charlie Kimber
Downloading PDF. Please wait...
Tuesday 17 July 2007

The post dispute is at a crucial stage, and it matters for every worker in Britain. Two hugely successful stoppages have produced not the slightest movement from Royal Mail bosses Allan Leighton and Adam Crozier.

The reason is that the man who really matters – Gordon Brown – wants to see the postal workers beaten and their CWU union humiliated.

Brown fears that if the postal workers win, it would encourage a wave of resistance by the other unions whose members also face pay cuts, job losses and privatisation.

If the postal workers are seen to break through, it would be a severe blow to New Labour’s neoliberal project. Brown wants to suppress pay and channel money away from public sector services to pay for the war and handouts to big business.

The Labour government understands how serious this battle is. Ministers will fight industrially and politically. Our side has to do the same.

Every union has to get behind the postal workers.

Postal workers are rightly set to escalate their action. There has to be harder hitting strikes to shake Royal Mail and further disrupt the big firms who are the main users of the mail.

But escalation is not the central battle at the moment. What is really crucial is that CWU leaders argue for other unions to strike alongside them – and give those unions the opportunity to come on board.

Coordinated action by several groups of workers would be the quickest way to produce a political crisis which could force Brown to act.

Others are moving towards their own battles. The RCN nurses’ organisation is asking members whether they want to be balloted on industrial action.

However, the most immediate reinforcements could come from the PCS civil service workers’ union. Mark Serwotka, the PCS general secretary, has repeatedly said that he will argue for coordinated action alongside the CWU.

The PCS has 250,000 members who have already taken action this year and still have a live ballot for strikes. But it has to give legal notice of action and prepare its own members to strike.

It cannot strike with the CWU on the basis of postal workers’ leaders giving only seven days notice for strikes, or without serious coordination.

This is a key task for CWU leaders. There is a natural desire not to give the bosses more than seven days’ notice of action, and in normal times that would be right.

These are not normal times – and in any case management cannot organise a national scabbing operation however much notice is given.

The CWU needs to set out a month-long programme of action, and discuss how others can be involved.

United action can break the logjam and, together with escalation of the strikes, deliver a famous victory that can transform the prospects of the British working class.

And the CWU should also suspend funding for the Labour Party during the dispute. Even Unison, whose leaders are impeccably loyal to Labour, did this during the local government pensions dispute last year.

Every union activist, particularly in the PCS, must fight to get delegations to the picket lines, hold meetings with post workers and support them in every way possible. They must push for their own union to fight back.

It is disgraceful that the TUC has made no statement urging full support for the postal workers’ strike.

Fighting unions, and the rank and file of all unions, have to fill the gap.

All of this is urgent. As the Oxford walkout showed this week, and with other flashpoints looming because of management provocation (see below), it is quite possible that the postal workers’ dispute could become a mass unofficial battle.

We need 100 percent support for the postal workers, and unity to win. 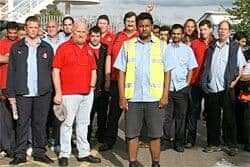