This article is over 15 years, 4 months old
The threat posed by the fascist British National Party (BNP) – and the best strategy for combating its rise – was discussed by party conference on Saturday afternoon.
Downloading PDF. Please wait...
Saturday 13 January 2007

The threat posed by the fascist British National Party (BNP) – and the best strategy for combating its rise – was discussed by party conference on Saturday afternoon.

Chris Harman, editor of the International Socialism journal, opened the session by outlining the nature of fascist politics and the dangers of underestimating the fascists’ determination to physically smash every vestige of workers’ organisation.

This makes it vital to create the broadest possible united mass campaign against them, he said – and that involves revolutionaries working alongside leading figures from the trade unions and wider labour movement.

But there are dangers in overestimating the fascist threat too, he added. In the current climate, the BNP is playing down its street thuggery and focusing on acting “respectable” to build an electoral base.

The fascists’ current offensive comes at a time when people are angry at New Labour’s policies of war and privatisation – an anger that can lead to a cynicism that gives the Nazis room to grow.

That means revolutionaries must throw themselves into building grassroots campaigns against health cuts, privatisation and other social issues, as well as working to create political alternatives to neoliberalism and the Labour Party, such as Respect.

The discussion touched and expanded on several of these themes. Jennifer Wilkinson from Preston noted that activists who focused too narrowly on fighting the BNP often became demoralised.

In contrast, the positive experiences of campaigning in Respect and Stop the War gave people more confidence to take on the Nazis and build effective Unite Against Fascism groups.

Jim Wolfreys from north London talked about the class nature of fascism. Both the BNP and Jean-Marie Le Pen’s Front National in France build their bases in lower middle class areas – but use this base to draw in a section of working class support.

This explains why fascists are reliant on spreading vicious racism to weld together an unstable coalition of interests, noted Chris Bambery.

But this reliance on racism is also a weakness for fascism. It is one that gives the left an opening to unite workers against racism in struggles for social and economic justice.

Weyman Bennett, joint national secretary of Unite Against Fascism, pointed to the recent successful anti-BNP mobilisations in Barking & Dagenham and Blackpool. Getting unions to back Unite were crucial in these cases.

In the case of Barking & Dagenham, Unite’s activity dovetailed with the local GMB union’s dispute with the council over single status.

He pointed to the presence of Respect councillors from nearby Tower Hamlets on the demonstration as an example of how Respect can work alongside people in Labour. 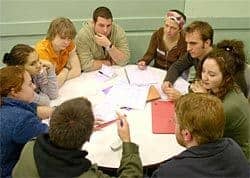 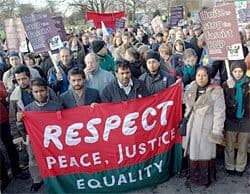