Vampires Feeding Off The NHS

This article is over 18 years, 6 months old
Low paid health workers are fighting back against private contractors in the NHS. Socialist Worker exposes these giant corporations who make their profit from paying poverty wages
Downloading PDF. Please wait...
Saturday 05 July 2003

‘THEY MAKE profits on our backs,’ ‘Private companies are only in it to make a fast buck,’ ‘The only thing they care about are the shareholders, not us or the patients.’ These were just some of the angry comments by low paid strikers from Scunthorpe, Grimsby and Goole hospitals as they descended on the headquarters of their bosses Carillion last week.

The workers are part of a gathering revolt against low pay and exploitation by the private firms in the NHS. In Bolton and in east London workers have also gone into battle, against their bosses ISS Mediclean.

Carillion (‘Crapillion’ say workers) and ISS Mediclean (‘Medimean’) are typical of the corporations that have taken over large chunks of the NHS under New Labour. These firms are not small, cowboy outfits. They are giant multinational corporations, with their tentacles spread across the globe. These firms have grasped the opportunity to add to their vast fortunes by leeching off the NHS.

They do so by running down services, condemning patients to dirty wards and inadequate care, and by screwing the workers who do the essential jobs in our hospitals.

They pay workers as little as they can get away with, give them little or few benefits or pension rights and then force them to work harder than ever. Now these workers are demanding justice. They want a living wage and they want dignity and respect.

As one Grimsby striker put it, ‘It’s not only about the money. I want to be treated as a person.’

Fat cats
Directors get over 27 times the wage of the average worker and 50 times more than a cleaner.

Owned by
Subsidiary of giant Danish-owned ISS group – one of the ten biggest employers in Europe.

£50.2 million – Carillion’s profits last year – up 11 percent on the previous year’s profits. £4.25 – is what many cleaners employed by Carillion at Scunthorpe General Hospital earn an hour.

Can the left in France rise to the level of the struggle? 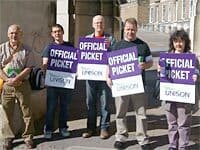 War in DR Congo: Who is to blame for the 3.5 million dead?