Victory at Pricecheck: ‘We’ve got a union here’

This article is over 22 years, 1 months old
Workers at Pricecheck, central London, have won their battle for union recognition. One Pricecheck worker describes how workers greeted the news: 'When our boss, Manzoor Choudhary, walked into the shop and said, 'I believe we have to accept the union,' everyone nodded and smiled politely. Ten minutes later he left. We all started cheering and hugging each other. After years of bullying, things are going to be different. We are going to be treated like human beings.'
Downloading PDF. Please wait...
Saturday 18 December 1999

Workers at Pricecheck, central London, have won their battle for union recognition. One Pricecheck worker describes how workers greeted the news: ‘When our boss, Manzoor Choudhary, walked into the shop and said, ‘I believe we have to accept the union,’ everyone nodded and smiled politely. Ten minutes later he left. We all started cheering and hugging each other. After years of bullying, things are going to be different. We are going to be treated like human beings.’

The campaign for union recognition started a year ago when management told the workers that they had to work at Christmas without any extra pay. Pricecheck workers used to earn between £3.25 and £3.50 an hour. They regularly work 60 or 70 hours a week. They decided they had had enough.

Mohammed Mahboob, one of those involved in the campaign, told Socialist Worker, ‘We told our managers that if they didn’t pay us double time we would not come to work. Choudhary backed down two days before last Christmas. But he refused to recognise the union. We contacted the union and set about recruiting workers. Soon over 60 percent had joined.’

Pricecheck worker Iftikhar Ul-Haq says, ‘What management hated the most was black and white trade unionists protesting outside the stores. Management told us not to get mixed up with white trade unionists. They said our problems could be sorted out inside the Asian community. But we believe workers of all races must stand together. We have nothing in common with Asian bosses.’

The manager of Pricecheck told one radio station, ‘I am just a small shopkeeper. I will go bust if the union is recognised at Pricecheck.’ Manzoor Choudhary in fact owns nine supermarkets. He is worth £8 million and is the 135th richest Asian in Britain. Pricecheck workers hope their victory will open the way for low paid workers to win union recognition all over the country.

Iftikhar says, ‘The battle is far from over. Yes, we have won union recognition. But recognition is no use unless we now fight to improve our pay and conditions. We must now build a fighting union.’

Sting in the tail

Winning a union at Pricecheck is an important step forward in the fight for union recognition. But there are problems with the settlement. Although Manzoor Choudhary agreed to recognise the union, he refused to reinstate three workers. All three were trade union activists.

TGWU union officials should not have allowed Pricecheck management to get away with this. The company faced a workforce determined to win union recognition. Management was also scared that the union would go to court over the sackings. TGWU leaders should have thrown all the union’s industrial muscle behind the campaign to get the three reinstated.

Tahuid was one sacked Pricecheck worker who did get his job back. He says, ‘I’m proud the union got my job back. I only wish the others were joining me.’

The victory at Pricecheck could not have come at a better time. Labour’s new trade union rights legislation comes into force in January. The Employment Relations Act will enable unions to win recognition by one of two routes.

Workplaces that have over 50 percent union membership will automatically win recognition.

A union can win recognition by holding a secret ballot. It has to be granted if at least 40 percent of those entitled to vote back the union.

There are problems with the legislation, but it does provide an opportunity to build trade unions. A survey last year found that three out of five people in non-union workplaces wanted to belong to a union. Trade unions and activists must seize the time. Union recognition drives must be launched in every office, shop and factory. The new law provides a space to go further than the government wants.

Great strike revolts of 1888-9 : 'A small spark that kindled a great fire' 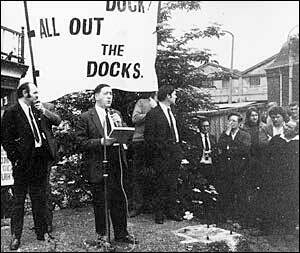