This article is over 12 years, 1 months old
A new book on the history of anti-war movements in Britain illuminates the stories of those who refused to fight in the First World War. Chris Bambery looks at their struggle
Downloading PDF. Please wait...
Tuesday 15 December 2009

Eyebrows might be raised at the news that the Imperial War Museum in London is endorsing a new history of anti-war movements in Britain from the last century.

They might be raised even higher at the news that the museum has the largest archive in the world of sound recordings of anti-war campaigners.

These have been turned over to the author Lyn Smith, who has charted opposition to war from the First World War through to the current conflicts in Afghanistan and Iraq.

The result is a new book, Voices Against War: A Century Of Protest. It’s a fascinating and rich read.

Socialist Worker readers will be familiar with some of those interviewed towards the end, such as Tony Benn and Lindsey German of the Stop the War Coalition, Kate Hudson and Bruce Kent of CND, and Reg Keys and Rose Gentle of Military Families Against the War.

But the book also charts how a smaller anti-war movement, opposing the 1999 Nato bombing campaign against Serbia, ensured activists were steeled in understanding the role of imperialism and rejecting notions of “humanitarian intervention”.

This ensured that they could react rapidly and effectively to the declaration of the “war on terror” after the 9/11 attacks in 2001.

Other chapters describe the growth of pacifism between the First and Second World Wars in reaction to the horror at the useless slaughter unleashed in 1914.

The book records the confusion over how to respond to Adolf Hitler, the anti-bomb movement of the late 1950s – including arguments between supporters and opponents of direct action – and a raw and honest account of the 1980s women’s peace camp outside the US cruise missile base at Greenham Common.

But for me the most interesting chapter is on those who refused to fight in the First World War.

Some 1,600 conscientious objectors were dragged before tribunals, branded as cowards, jailed, beaten and sentenced to hard labour. After the war ended they were barred from voting for five years. Sixty nine died in detention.

One objector describes walking 11 miles to join a 10,000 strong anti-war protest addressed by Keir Hardie, the founder of the Labour Party, just as further down Whitehall the cabinet was drafting its declaration of war.

Two leading lights in the Independent Labour Party, Fenner Brockway and Clifford Allen, founded the No Conscription Fellowship in November 1914.

In 1916 both men were arrested after handing out leaflets opposing the introduction of conscription. They were jailed for two months and, shortly after their release, jailed once more for refusing to enlist.

Allen served 16 months in prison before being released on grounds of ill health. Brockway was only released six months after the war had ended.

The heroism of these men is striking (women were not subject to conscription in this war).

Yet their accounts point to a failure. The opposition to the war from the left was largely pacifist and stressed the need for a common humanity.

So there was no sense that war was and is central to capitalism or that it was working people who would make the most sacrifices.

Before 1914, many opposed to the capitalist system saw socialism as inevitable – whether they supported change through parliament or revolution.

They believed that the job of socialists was to prepare and advance their message through education and by standing in elections.

In practice they largely accepted the division between economics and politics that is central to parliamentary “democracy”.

So activists tended to focus on one particular feature of the system. Trade unionists looked to strikes and struggled for economic gains.

Supporters of women’s rights fought for the vote. Elected representatives focused on political change through parliament and the council chamber.

This meant that in 1914 they did not have an overall analysis of what underlay the war drive, or how to halt it.

Anti-war left wingers found they could rally and demonstrate against war up until the point where it was declared, but they had no strategy once it had begun.

Most fell in behind the “national interest”. Keir Hardie was

heartbroken. But he kept his pacifist position until his death in 1915.

The individual protests of those who refused to fight fitted in 1914.It seemed to be the only way to make a stand when even labour and trade union leaders had rallied to the flag.

Yet across Europe the mood began to turn against the war as it brought galloping price rises, wage freezes, bans on strikes and, in the case of Russia, Germany and Austria, hunger.

On Clydeside in the west of Scotland as early as 1915 a mass rent strike against ruthless landlords forced the government to introduce rent controls.

The leading lights in the Clyde Workers’ Committee were anti-war as individuals. They belonged to left wing parties.

But they also accepted a division between economics and politics. Their prime concern as a group was work in the trade unions to win and defend pay and conditions.

Their political activity was confined to the weekend, when they might make anti-war speeches.

The British government – sensing a weakness – went on the offensive, portraying the leaders of the Clyde Workers’ Committee as “unpatriotic” and “pro-German”. It used

The Glasgow school teacher John Maclean was a fierce critic of the committee’s refusal to come out openly as anti-war, so much so that he was excluded from its meetings.

More clearly than anyone else in Britain, Maclean argued the working class had no interest in a war fought for profits and markets.

He went on to support the 1917 Russian Revolution, led by the Bolsheviks, and held it up as the shining example of what needed to be done.

He was also one of the few people on the British left who argued to support rebellions against British colonialism in Ireland, vigorously defending the 1916 Dublin Uprising as a blow against imperialism and war.

The British ruling class retaliated by ensuring that Maclean was sacked from his job and sending him to prison three times for sedition.

Yet despite his strengths, Maclean was wedded to the old model of socialist organisation that stressed education along with electoral interventions. He did not look to a new, Bolshevik-style approach that combined a sharp ideological edge with being grounded in the daily battles of working people.

The First World War ended with soldiers and workers in first Russia and then Germany refusing to sacrifice themselves for the “sacred cause” of their country’s war effort.

In 1917 the October Revolution took Russia out of the war. The following year mutinies in the German forces spilled over into revolution and saw Germany leave the war, ending the conflict.

In the underground conditions of pre-war Russia, the Bolshevik Party and its main leader, Lenin, had argued that whatever areas of work individual party members might focus on, the aim was to mobilise workers with revolution as a goal. This was seen as perhaps not happening immediately, but not in the distant future either.

In 1914 Lenin argued that the First World War was an imperialist conflict in which workers had no interest, and that the main enemy was at home.

Revolution on the domestic front was the key to ending the slaughter.

One of the key reasons the Bolsheviks won the popular support needed to make a revolution was that they were the only resolutely anti-war party. Workers, peasants and soldiers knew it would deliver on its pledge to end the conflict immediately.

This did not mean the Bolsheviks refused to participate in strikes, demonstrations and protests alongside those who were not 100 percent pro-revolution or even anti-war.

It meant it put itself alongside these people while continuing to educate, agitate and organise.

This seems to have carried us a long way from the central narratives of Voices Against War.

But at its close, as the book focuses on the recent movement against the Iraq war, you get a sense of what is possible in the fight against a world where economic competition repeatedly spills over into military competition.

And you also get a sense of what will be required to cleanse the world of war for once and for all.

Voices Against War: A Century of Protest by Lyn Smith is available from Bookmarks, the socialist bookshop. Phone 020 7637 1848 or go to » www.bookmarksbookshop.co.uk 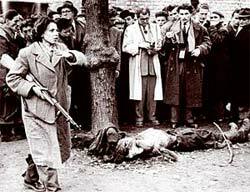 1956 a year of revolt and revolution