This article is over 13 years, 5 months old
Yiannis Theoharis Yiannis Theoharis is a member of the steering committee of the union of workers of the Intracom telecoms company in Athens
Downloading PDF. Please wait...
Monday 15 December 2008

‘Around 50 days ago Intracom, which is a big telecoms company, announced it wanted to cut 150 jobs out of 2,700, and also that it would not increase our wages.

Management said that because of the economic crisis the company was no longer making enough profits. But the union did not accept this logic.

We said the company has made lots of profits in the past and it didn’t share them with workers. Now it is in trouble, it shouldn’t share that with the workers.

The union organised large gatherings where people voted to strike.

On 20 November the first internal strike took place in the company – we had previously participated in general strikes.

It was very successful, with a lot of people taking action. While we have not stopped the company it now says it wants to get voluntary redundancies from people. Around 50 people have left and the company says it wants 50 more to go.

Management tried to divide us by saying it would not fire people from certain departments. But this did not work. Everybody understood the danger and stuck together.

We are now discussing holding another strike.

We also joined the general strike last week and marched through Athens. Some people were afraid to march because of the rioting, but we had a delegation with other groups of workers and students.

There is an explosion among young people in Greece, but it is not only young people who are angry. They know they have little future under the current system and feel the pressure that is on their parents to work and survive.

Everything is pushing people to fight or to support the young people taking to the streets.

I think we will see an even stronger struggle by young people, workers and the rest of society. The government must resign.’

Evdokia Moustaka is a law student at the university of Athens

‘Even before the murder of the 15 year old boy there were occupations of some of the universities in Greece over the attacks on education.

After the general strike last week, we held a coordinating committee meeting of students from different universities.

We talked about how to spread the occupations. We are going to have general assemblies in all the universities to discuss this.

We want to demonstrate with the striking public sector workers this Thursday 18 December. We are calling for another general strike.

This is not just about students or the killing of a school student, but a more general issue about the way our society is run.

Students resisted the government’s law regarding the introduction of private universities two years ago with occupations. But some of these measures are now being introduced.

The difference then was that we felt isolated as we were the main ones fighting – although we had the support of people. Now it is the whole of society in revolt against the government.

There is a lot of talk about the rioting and destruction – people smashing up shops and setting fire to things.

But many people are saying that we need to struggle in a more organised form, with more strikes, occupations and demonstrations.’ 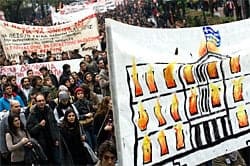