Voices from the Unite the Resistance convention

“What the government is doing will affect everyone. It’s not just about public sector workers.

It will matter to people if their doctor is overworked and tired. The cuts will affect old people and unemployed people.

I was watching Children in Need last week and they wanted donations to fund a centre for children in a poor area. But the government should fund things like that.

This is obviously going to be a long battle but I’m optimistic.

At this conference there are electricians, people defending libraries, everyone. It’s not just about pensions any more. It’s about what society looks like.”

“This is the government’s miners’ strike. They want to beat us and to push through cuts and privatisation.

The government is trying to drive a wedge between public and private workers.

The real divide is between the FTSE 100 directors and those with no pensions at all.

There’s a good mood in my school and a mood to protect our younger colleagues too.

30 November has to be a springboard for further action.”

“We can’t take action ourselves but we support all those going out on 30 November. Our branch sent people on the TUC march in London and to protest against the Tory Party conference in Manchester.

We have to educate people about why we are all part of the same fight.

The media want to pit private sector workers against those in the public sector. We have to open our eyes to what is going on.”

“To use an old Leicester expression, I’m fed up with people being mardy. For 20 years people have acted like this stuff is ours to give away.

Today is good because it’s discussing what we need to do to win.

I think we all need to know more about the details of the pension attacks so we can talk to people at work. There is money to pay for them and we can convince everybody of that.”

Steve Ellis, librarian from west London in the Unison union

“There was rioting in Ealing but we built solidarity against the backlash through the union.

The council said it would evict people connected to individuals who rioted.

We passed a motion in our union meeting saying that, as council staff, we would have no part in the evictions. To this day none have taken place.

We’ve won other victories too—we’ve stopped library closures and attacks on our terms and conditions. These things show that we can win.”

“Management at the hospital are already making plans to cut services on the strike day.

They know they can’t run things as normal.

The level of staff means it will be like Christmas day.

Some of us will be picketing, others will be going on a march. We want to get as many of us together on the day so we don’t feel isolated.

It’s good that we’re out with other unions.

This is not just an NHS issue. The Tories will have to listen to us. I have hope that we can get them to change their plans.”

I’m most worried about the effects the changes will have on our health. Can you imagine a primary school teacher in her 70s on the floor with lots of children?

Some people won’t be able to get a pension as they’ll be dead by the time they can claim it.

People will take more time off sick because they’ll be overworked.

There’s a wonderful atmosphere here at this conference because it shows us that we’re not alone, we’re not isolated.

People are all here together from all over Britain.

“I work in a lab where they are cutting staff numbers to a minimum. Everyone is suffering extra stress. We organised a coach to come here and I’m glad I came.

I thought it was good to have the meeting on uniting communities because we want to include everyone in this fight.

I had some doubts about whether we were doing the right thing. Only a few of us, the older ones, have ever been on strike before. Now I feel inspired. It’s up to us to go back and inspire everyone else.

This isn’t just about pensions, it’s about everything. We are what they call the 99 percent.”

“It’s important that we raise the slogan of ‘All out, stay out’. But what happens on 30 November will determine what happens afterwards.

We have to have in our heads who we will be talking to, if the feeder marches are sorted, and do we know who is coming to the picket lines.

That’s what will make the difference between where we are now and staying out.” 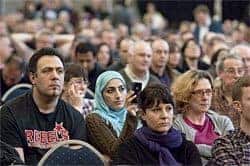 Unite the Resistance convention shows: We can win