In the same week that Joe Biden announced the ­withdrawal of soldiers from Afghanistan, he proposed raising military spending to £546 billion.

It comes as Russia put thousands of troops on the border with Ukraine.

The US president said it was time to “end America’s longest war”. But the era of the US throwing its military weight around the world isn’t over—and neither is the risk of more wars.

He is discussing repositioning forces, possibly to neighbouring Tajikistan, Kazakhstan, and Uzbekistan, to keep Afghanistan in a state of siege.

The US will also still pay the salaries of all Afghan security forces.

And Biden said the US will “keep providing assistance to the Afghan National Defense and Security Forces. Along with our partners, we are training and equipping nearly 300,000 personnel.”

“Providing assistance” ­usually means keeping some soldiers in the country as “trainers” or “advisers”.

Yet there’s no doubt that the move represents a landmark defeat for the US’s attempts to force its will on the world through force and violence.

When the US invaded Afghanistan it said its aim was to root out Osama Bin Laden and the al-Qaida group.

In reality, it was all about reasserting US dominance, especially in Asia and the nearby Middle East.

That was in 2001. In 2021, the Taliban resistance group boasts, “We have won the war and America has lost.” Meanwhile, Biden tacitly admits defeat.

Despite almost 20 years of inflicting death and misery on Afghan people—and sending some 800,000 soldiers in total—the US is not in control.

“We cannot continue the cycle of extending or expanding our military presence in Afghanistan hoping to create the ideal conditions for our withdrawal, expecting a different result, said Biden.

He could say almost the exact same thing about the US’s wars in Iraq, where he also apparently plans to withdraw soldiers.

Biden and the Iraqi ­government agreed earlier this month that the US would remove all “combat forces” from the country.

Again, some soldiers will stay in “training and advisory roles” and there’s no timetable for pulling out.

But it’s not happening all on the US’s terms.

The Iraqi parliament demanded the US withdraw its troops last year, after the US assassinated visiting Iranian general Qasem Soleimani in an airstrike on Baghdad airport.

And when—or if—the US does pull out, it will leave its rival Iran with more power in Iraq.

And Iraq is now a big market for Iranian exports—­including so much gas that Iran can threaten Iraq with power blackouts.

This points to the feature of capitalism that causes wars in the first place—imperialism.

Rival states compete for ­control of markets, resources and territory so that businesses and multinationals tied to their economies can keep growing and profiting.

This growth in pursuit of profit is constant—which means states constantly compete to divide and redivide the world between each other.

It’s all backed up with ­military force—and when one state’s growth threatens another’s interests, it can mean war.

This competition can happen between major powers on a global scale, but also regionally.

Iran took advantage of the US’s decline to gain much more power over Iraq’s politics and economy.

It also stretched into Syria by joining the civil war on behalf of dictator Bashar al-Assad.

Its forces in Syria are now regularly bombed from across the border by Israel, which sees them as a threat.

Iran is also in direct, ­dangerous and deadly competition with US ally Saudi Arabia, which has its own interest in being a dominant regional power.

Saudi Arabia has always been kept subordinate in its partnership with the US. But over the past decade—as the US declined in the Middle East—it’s acted more freely as a military power in its own interests.

The most horrific example of this is the prolonged war it has waged against the Iranian-backed Houthi movement in Yemen.

Previous US president Donald Trump hoped to use Saudi Arabia and Israel to push back Iran by force.

He forced harsh economic sanctions on Iran and repeatedly threatened war. At the same time, he promoted closer cooperation between Israel and Arab states to isolate and confront Iran.

Biden wants to keep more of a lid on it. He’s talking up a return to a 2015 deal between the US and Iran that would end sanctions—but under ­conditions that assert the US’s dominance.

He’s also stuck with parts of Trump’s plan to unite the US’s allies and lean on them to intimidate Iran.

These were previously only sold to Israel. But a deal between Israel and the UAE—championed by Trump—made the sale possible.

Israel has already been launching surprise missile attacks against Iranian ships, and is apparently behind a cyber attack on an Iranian nuclear facility.

This is exactly why the US has plied Israel with billions of pounds worth of military aid for decades—to act on its behalf in the Middle East.

Meanwhile, it can ­concentrate its own military against other rivals.

That’s because China’s ­economic influence is ­growing worldwide, in competition with the US. Its share of global GDP—the market value of all goods and services produced in the world—is higher than the US’s.

In a challenge to the US, it has scoured the world for markets to sell its products and build its industry, particularly across Africa.

Its “belt and road” plan aims to build a vast network of transport infrastructure across the world to facilitate its trade.

And it is building up its ­military power to bolster this.

The US has tried to stop China’s growth by encircling the South China Sea with its allies and navy bases.

This is one of the world’s ­busiest shipping lanes, and its main link with the rest of the world.

The US wants to stop China taking complete military control. But over several years, China has built up its naval forces there.

This includes building entire new islands for navy bases, which it also uses to claim ownership of more territory surrounding them.

Now China is moving its ­military forces closer to the island of Taiwan, which it claims as its own but which the US backs as independent.

Occupying Taiwan would give it much greater control over the South China Sea—but could also mean confrontation with the US.

At the same time, the US faces a similar challenge with Russia over who controls ­eastern Ukraine.

Russia is still the major power in eastern Europe, which it has held on to by keeping smaller states on its borders under its influence.

These are also a “buffer” against the US and the European Union (EU).

But attempts by Ukraine to enter the EU and the US-dominated Nato military alliance threaten this.

Russia invaded Crimea, in Ukraine, in 2014 after a protest movement installed a right wing government that wanted to break from Russia and move closer to the West.

It also backed forces in eastern Ukraine that wanted to break away in response.

Now Russia is apparently building up its military forces on the border with Ukraine, with some Ukrainian politicians saying they fear an invasion.

This is also a military ­challenge to the US. Biden has said Ukraine has the US’s “unwavering support”.

The example shows that, just because the US’s power is declining, there’s no less threat of war.

In fact, new regional and global competitions are fuelling war and violence everywhere—from the Middle East, to eastern Europe and the South China Sea. 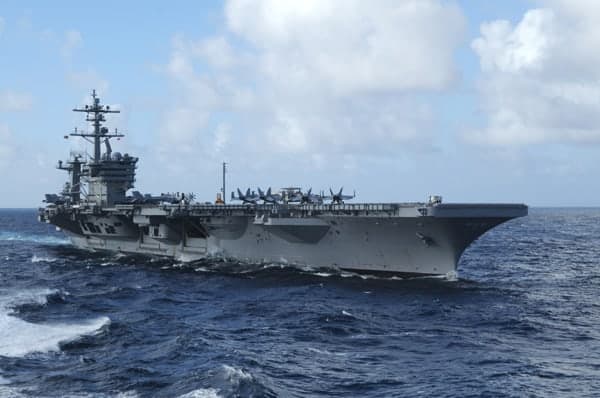