War and racism – both are in the ‘national interest’ for Labour

In 1953 Harold Wilson wrote a book called The War on World Poverty.

It argued that at least 3 percent of national income of advanced countries should go to poorer countries.

During Wilson’s first time in office, this figure fell from 0.53 percent to 0.37 percent.

The Labour Party was committed to open immigration in Britain—as long as the boom lasted.

As Arthur Bottomley, Labour commonwealth spokesman said in parliament in 1958, “We are clear in our attitude towards restricted immigration.

“We are categorically against it.”

But when Wilson took over, he said, “We do not contest the need for control of commonwealth immigration into this country”.

During the 1960s the Tories whipped up racism in elections.

He said, “We had to out-trump the Tories by doing what they would have done, so transforming their policy to our policy”.

So in 1965 Labour started to introduce a series of immigration acts.

These withdrew the rights of British passport holders who lacked close connections to Britain from coming here.

Rich, white people from the commonwealth could come to Britain—black and Asian poor people could not.

But they always treat national interests as more important.

That’s why Wilson backed the US in Vietnam but didn’t send troops.

But he did send troops to crush the civil rights movement in Northern Ireland.

Wilson took Britain into the European Union. He based his decision on what was in the best interests of British national profits. 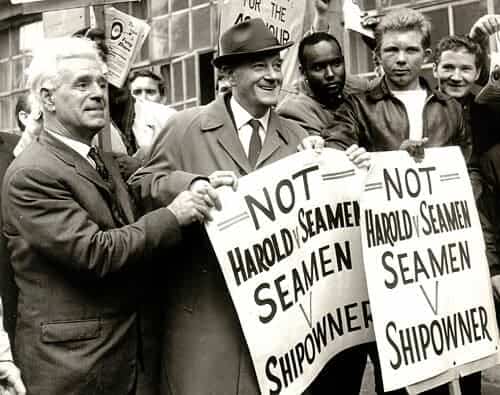