‘We can win union fight,’ says US Starbucks worker

Workers in the US are winning the right to organise in the factories and stores of massive multinational corporations. Sophie Squire speaks to activists that are fighting for union recognition
Downloading PDF. Please wait...
Saturday 30 April 2022 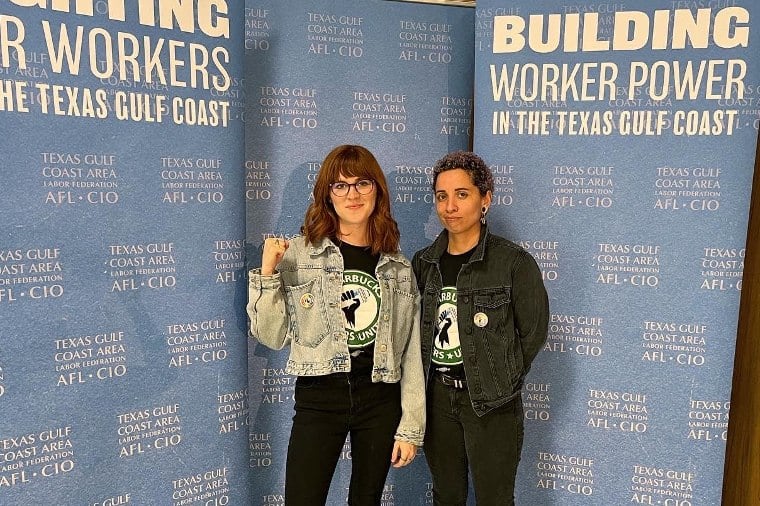 Across the United States workers are taking on massive corporations to win the right to organise in a union. Inspired by the victories at Amazon and Starbucks, millions are thinking about how they might unionise their workplace, and asking what a union can do.

Workers at Starbucks coffee shops are among them. By Thursday of last week the number of stores getting organised totalled over 200.

Through the Starbucks Workers United campaign, workers vote on whether to join Workers United Labour Union. This is affiliated with the ­second-biggest union in the US, the Service Employees International Union.

While it cannot be denied that a big union is involved, workers say this campaign is being driven from the ground up. Many activists look to Buffalo, in the state of New York, where Starbucks workers first petitioned the National Labour Relations Board (NLRB) for a union election last August.

Morgan, who works in a Starbucks in Austin, Texas, told Socialist Worker that she didn’t believe unionising was possible at first. But workers’ experiences in Buffalo got her thinking differently.

“I noticed what happened in Buffalo, but I’ll admit it didn’t occur to me that we should do it here,” she said. “I thought that maybe Buffalo was just a particularly bad store to work in.

“Then our hours got cut. Some people had their hours cut by half. Some went from being scheduled for 20 hours to eight. 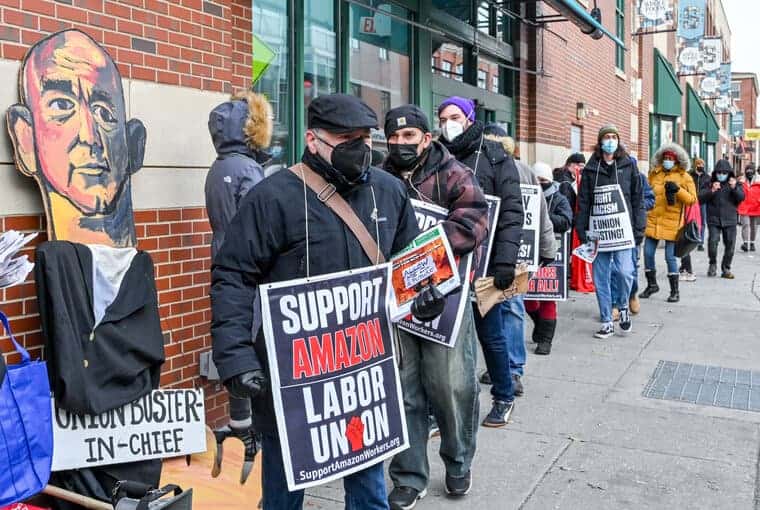 “Corporate said it was a reasonable adjustment correlating with how much profit the store earned. But it’s going to harm people’s livelihoods. People are scared they’ll lose ­benefits. You get health insurance if you work 20 hours a week. If your hours get cut to 15, you’ll lose out.”

“The cut in our hours was the fuel that lit our fire, and we moved fast. Two other colleagues and I set up an ­unofficial committee. Then we started posting memes and articles into our barista group chat about how awful Starbucks CEO Harold Schultz is.

“We had a Zoom call for the Starbucks Workers United group, and within six days, we had organised the store. We managed to get 79 percent of workers to sign union cards in three days. After that, we made our intentions public and then filed to have a union election.”

After going public, Morgan said ­managers employed tactics to make workers feel uncomfortable. “Dress code is now being enforced more severely, especially for those that are very pro-union. We’ve also been told that we’ll be disciplined if we’re even a minute late,” she said.

But Morgan added that these attacks are “fuel” to keep fighting. “I think we can win this fight,” she added. “I really do, with the way that it’s spreading. We can unionise Starbucks workers.”

But Morgan stressed that unionising is only the beginning. “We must fight so that we are paid enough to live on. We should be allowed to keep tips that we receive on credit cards. Another important thing that we fight for is for workers to be able to decide what is needed in their store and take the action that they deem appropriate.

“We want to elect our own leaders and fight for a real say in how our stores are run.”

Seven Starbucks workers were called into work by managers while a snowstorm raged in Memphis, Tennessee in February of this year. At fifteen-minute intervals they were all fired for trying to unionise their store. This move was later deemed illegal by the NLRB.

Beto, one of the seven who was fired, told Socialist Worker that he and others were inspired by Starbucks workers’ move to unionise in Buffalo. “We knew what we wanted after that,” he said, “That was to unionise.”

The seven workers were only sacked after declaring that their store would file for a union election. Nikki said that bosses couldn’t legally fire them for organising. So they came up with trumped-up charges instead. “One of the reasons they gave for firing me was that I’d ask a colleague if they wanted me to clock in early when I first entered the store every morning,” she said.

How US textile workers fought back in 1912
Read More

Beto added that one of the reasons for firing him was that he “didn’t wear a mask in non-working hours.” Nikki pointed out that they suspended those known as the Montgomery Seven because they worked so well together. “We’ve bonded through trauma working at this store,” she said. “These guys are my family, which made our union campaign so strong.”

And Beto added that Starbucks’ attack on them had “backfired”. “Starbucks head office tried to make us an example of what happens when you unionise. But really it’s had the opposite effect of what they wanted. It’s inspired many more stores to unionise and fight back.”

He added, “The bosses will do absolutely everything to strip us of our dignity. But we will keep fighting back, for Starbucks workers and everyone.”

Lessons from the battle to unionise Amazon warehouses

Thousands cheered when Chris Smalls, the founder of the Amazon Labour Union (ALU), announced that 8,300 workers at the JKF8 warehouse in Staten Island, New York, had won their unionisation ballot last month.

Small proclaimed, “A revolution is here. We’re going to organise buildings all over the nation. In the last 72 hours we’ve been contacted by workers all over the world. They want to unionise and we’re going to absolutely help them.”

The news was a beacon of hope that workers everywhere could stand up to this corporate giant. It inspired the nearly 1,500 workers in the nearby LDJ5 Amazon sorting centre to vote on whether to join the ALU. The result of the ballot will be out soon.

Amazon bosses are terrified that workers dare to unionise. They are employing dirty and intimidating tactics to undermine the organisation. 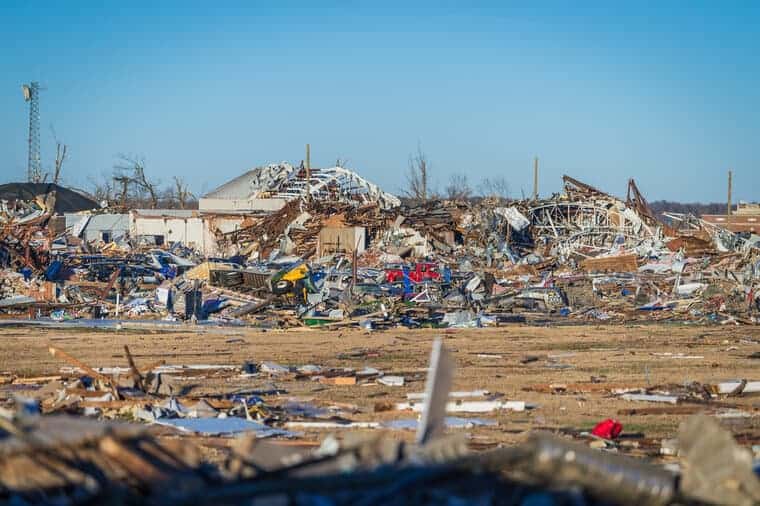 Pascquale Cioffi, a process assistant at the JKF8 fulfilment factory, described how managers would be “grabbing people and taking them to the office.” He added that they would sit them in a room with lawyers and human resources reps to ask whether they were coerced into union support.

And workers at another warehouse have received threatening letters from Amazon that asked workers to vote no and attacked the union for asking its members to pay dues. The workers at JKF8 have triumphed, but the battle to organise Amazon workers won’t be easy.

An attempt by the Retail, Wholesale and Department Store Union (Rwdsu) to unionise a warehouse in Bessemer, Alabama, failed just last year. The No vote led by 993 to 875, but the NLRB ordered a re-vote due to public pressure on Amazon. With some votes still contested, the official result of this round of voting is unclear. But the union is likely to lose again by around 118 votes, according to the Rwdsu.

So why have workers in New York triumphed, while workers in Alabama still can’t get over the threshold? The successful drive to unionise at the JFK8 centre was driven from the bottom up by workers. It relied on worker activists inside the building, and some of them were also political activists.

In contrast, the Rwdsu took a different, more traditional trade union approach that relied on union full timers to build a yes vote from outside. All the decisions made during the campaign were driven by full time union officials, who did not experience the same hardship that workers did inside. This ended in defeat.

What’s clear is that worker-led campaigns to unionise Amazon are a must, but organising within this industry giant won’t be simple. Bullying bosses, lousy pay and awful conditions mean that Amazon has a high staff turnover. US data company, Payscale found that the average tenure of an Amazon worker is only a year.

Amazon bosses hope this will lead to a constant turnover of staff that won’t stay long enough to build union links. This means that building union membership at Amazon isn’t enough. Workers must push for strikes and action to win better pay, conditions and dignity.

The union has to be an instrument for struggle and improvements in workers’ lives. The Amazon bosses are playing dirty but they can still be beaten. One sign of how Amazon will try to hit back it that is has formally objected to the vote to unionise at Staten Island. Ludicrously it complained to the National Labor Relations Board because the vote had been conducted in a way that favoured the union.

Amazon argued, in one instance, that when the union offered workers marijuana, it amounted to an “impermissible grant of support” for workers’ votes. The company said the way union supporters had interrupted mandatory anti-union meetings “intentionally created hostile confrontations” that limited Amazon’s right to communicate with staff.

The company also said the union had improperly “polled” workers during a key period before the election. The Amazon Labor Union responded, “Amazon is attempting to overturn the democratic voice of its own workers.

“The entire world knows that the workers won our election and we look forward to sitting down with Amazon in May to negotiate a fair contract for the workers at JFK8.”

The company has refused to recognise the union. But it can be beaten. Nearly 20 years ago, the workers at a Walmart store in Quebec voted to unionise, and within six months the company shut the store down. But Amazon simply cannot shut its large warehouses. 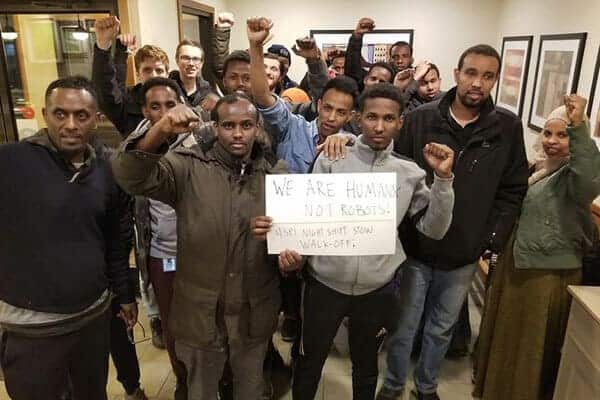 Activists take to the shops against tax dodging Starbucks