This article is over 12 years, 1 months old
Massive corporations are wrecking the planet, burning huge amounts of fossil fuels and causing climate change as they disregard everything in a frenzied race for profits.
By Tom Walker
Downloading PDF. Please wait...
Tuesday 01 December 2009

Massive corporations are wrecking the planet, burning huge amounts of fossil fuels and causing climate change as they disregard everything in a frenzied race for profits.

From Shell oil’s devastation of the Niger Delta to the Royal Bank of Scotland’s exploitation of tar sands in Alberta, Canada – which are polluting indigenous people’s land with toxic waste and destroying an area of forest larger than England – the corporate world is riddled with climate criminals.

Faced with such cases, many people conclude that economic growth, development and progress in and of themselves must be the problem.

This view traces the climate crisis back to the changes in society brought about by the Industrial Revolution from the late 18th century onwards.

Some people even say that the planet cannot afford for everyone in the world to have the living standards we enjoy in the West. But this is completely wrong.

Development itself is not the problem. In fact, something important has happened over the past two centuries.

Technology has moved on to a point where, for the first time in history, humanity has the capacity to produce everything that everyone on the planet needs – food, shelter, heat, medicine and much more.

For example, there is more than enough food produced to feed everyone – if it were distributed equally.

Climate change shows that capitalism is contradictory. It is incredibly dynamic, producing goods and food at a level never seen before.

Yet at the same time it concentrates resources and wealth in the hands of a tiny minority – and allows them to destroy the planet.

Karl Marx is best known for his searing condemnations of capitalism. But he also pointed out that it “has created more massive and more colossal productive forces than have all preceding generations together – machinery, application of chemistry to industry and agriculture, steam-navigation, railways, electric telegraphs.”

This development has brought many benefits. Compare the way we live today to the way things were before the Industrial Revolution. Then people lived much shorter lives, often blighted by sickness and lack of food.

And people had no control over their environment.

The development of technology has given us thousands of new ways to influence the world around us and stop us being helpless in the face of nature.

The real problem is the form that the world’s development has taken.

Capitalism is a brutal system, ruthlessly exploiting anything it can to make money, from the working class to the planet itself. Marx explained that the system works by “undermining the original sources of all wealth – the soil and the worker”.

And at the same time it is hugely wasteful.

In Britain, supermarkets throw away enough unsold food to feed six million people every year. When challenged on this, they say it is cheaper to bin the food than pay workers to put discount stickers on it.

Meanwhile half the world’s population lives on less than $2 a day and goes hungry.

Their hunger isn’t caused by lack of food – it’s caused by the chaotic system we live under.

It is outrageous that poorer countries are being told that they have to solve the climate crisis simply because they’re industrialising later than the West.

It is true that China as a country has overtaken the US as the world’s biggest polluter, but the US still emits far more carbon per person.

And much of China’s emissions are caused by Western multinational corporations relocating factories there.

Many of these firms make pointless or poisonous things that society would be better off not producing at all.

And, to add insult to injury, it is the Global South that has been worst hit by the effects of climate change so far.

In the run-up to the Copenhagen climate summit, the pressure is on poor countries to pledge that they will slow down their development. The hypocritical Western governments want to make the world’s poor pay the price for the climate crisis.

Working class people in the West are scapegoated as well. We are told that it is people going on cheap flights who are causing the problem – even though luxury business travellers take the most polluting flights.

That doesn’t mean there shouldn’t be fewer flights.

High-speed rail would be a good alternative to airport expansion as it produces far less carbon emissions.

But the point is that it’s wrong to blame ordinary people for a problem that is not our fault.

If people had real democratic control of society then it wouldn’t be cheaper to fly from one side of the country to the other than to get the train. There are plenty of workable solutions to these kinds of problems – but they mean challenging the rule of profit.

The answer to climate change is not to shun technology or to campaign to ban planes. In fact, technology could help if we lived under a different kind of system.

Under capitalism, firms resist changes to production methods that would reduce their carbon emissions as they are expensive and reduce their profits.

This is what has led us to the climate crisis. If it wasn’t for the power of the corporations, production could be sustainable, and serve humanity instead of polluting and destroying the planet.

We need to gear production around fulfilling human needs.

We could easily end global poverty with what is spent on weapons and war every year.

There is more than enough wealth in the world to ensure everyone has a decent standard of living.

We should seize the wealth of the rich and redistribute it to those who need it.

When we cut carbon emissions, we should target the corporations and the ridiculous lifestyles of the wealthy first.

And more fundamentally, we should reorganise society to eliminate the chaotic system of capitalism.

The answer is to build another kind of society entirely. The best way to defeat climate change for good is to fight for a socialist future.

We need to look for collective solutions to climate change

Is global warming all your fault? 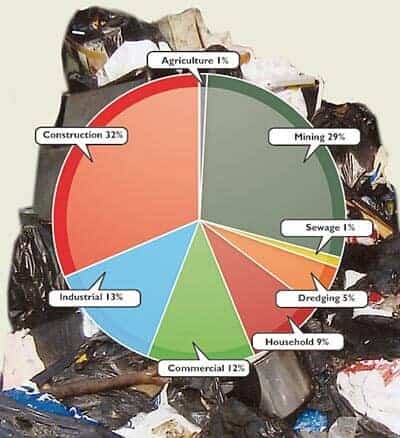 Graph showing proportion of waste by sector in the UK