Then the BNP base on Barking and Dagenham council shattered. The BNP boasts that it could take control of its first council turned to dust as all 12 BNP councillors were overwhelmingly voted out.

“Towards the end of the campaign the BNP were forced to spend most of their time saying ‘We’re not Nazis’ and ‘Nick Griffin isn’t a Holocaust denier’.

“A key moment was a leaflet UAF put out saying ‘BNP: People of violence’ going through the record of convictions of BNP members.

“Where the BNP had been on the offensive, focusing on attacking immigrants for local housing shortages, we pushed them onto the defensive.”

“People started to ask ‘Do we want to be known as a Nazi borough?’”

UAF supporters knocked on every door in eight of the key wards where the BNP threat was greatest.

Weyman thinks that UAF and its sister campaign Love Music Hate Racism also had a big impact on young people across the borough.

“Many of the musical heroes of young people were speaking out against the BNP—that made a real difference.

“Love Music held a local gig at the Broadway theatre and UAF leafleted schools. Many of the young people can’t vote but they influenced their parents. It created an anti-Nazi atmosphere.”

The involvement of trade unionists was also crucial. Both the NUT teachers’ union and the PCS civil service union sponsored days of action, and turned out members to knock on doors.

“There were other examples too,” adds Weyman, “Draymen, who deliver beer to pubs, and are Unite union members, took our leaflets to every pub.”

The turnout to vote locally went sharply up. In the Barking seat, turnout increased by over 10 percent, nearly doubling Labour’s majority to over 16,000. In the election for the council, the numbers voting rose even more sharply, rising by over 20 percent in some wards.

The argument that the BNP are not a normal party, but a Nazi party that had to be stopped was decisively won among the majority of people.

Many former Labour supporters who had stayed away from the polls turned out this time to stop the BNP.

Unite Against Fascism public meeting: Victory over the BNP: Where do we go next? Tuesday, 18th May, 7.30pm, Jazzie Jake, North Street, Barking IG11 8AW 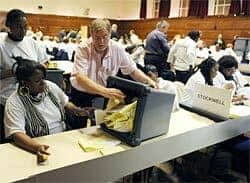 Britain's general election: no winner and no mandate