When the tide of revolt rose against neoliberalism

This article is over 10 years, 6 months old
Genoa is one of the cities where, at the end of the Middle Ages, capitalism began to emerge. On 20 and 21 July 2001, it was the scene of mass protests against the system to which it had helped give birth.
By Alex Callinicos
Downloading PDF. Please wait...
Tuesday 19 July 2011

Genoa is one of the cities where, at the end of the Middle Ages, capitalism began to emerge. On 20 and 21 July 2001, it was the scene of mass protests against the system to which it had helped give birth.

The protests were directed against the G8 summit. But they were given a harder edge by the fact that the right wing media billionaire Silvio Berlusconi had shortly before formed his second government.

Berlusconi and his deputy, the ex-fascist Gianfranco Fini, ensured that the protesters were met with harsh repression. The heart of Genoa was walled off to form a fortified “Red Zone” for the summit.

On Friday 20 July, the day set aside for direct action against the Red Zone, the paramilitary Carabinieri ran amuck. Luca Casarini, the leader of the Tute Bianche (white overalls) movement, said afterwards, “We were attacked in cold blood, when our march was totally peaceful.

“They charged us first with tear gas and then with armoured vehicles, closing off all escape routes. On Friday afternoon all hell broke loose, and people were afraid of dying.”

The violence climaxed with the killing of Carlo Giuliani. No one has ever been brought to book for this murder.

But the demonstrators weren’t intimidated.

The Genoa protests were part of the rising movement against capitalist globalisation.

After two decades of neoliberal assaults on the fabric of social life, the tide of revolt began to rise globally.

Many European activists were inspired by the example of Seattle to converge on the annual general meetings of the International Monetary Fund and the World Bank in Prague in September 2000.

What the French Marxist Daniel Bensaïd was to call the “new internationalism” was emerging.

Activists in Italy—for example, the Tute Bianche—were influenced by the Zapatista Army of National Liberation in Mexico. Its 1994 rebellion against the North American Free Trade Agreement became a global focus.

Planned as an alternative to the World Economic Forum, the annual big business jamboree in Davos, Switzerland, the WSF attracted 10,000 participants.

Some of the Italian delegates on their return home formed the Genoa Social Forum to organise the G8 protests.

Demonstrators from all over Europe defied the closure of many Italian airports and a virtual physical blockade of Genoa to reach the city. In Britain the new anti-capitalist network Globalise Resistance organised a special protest train. Huge contingents came from Greece.

On the night of Carlo Giuliani’s murder Vittorio Agnoletto, of the Genoa Social Forum, and Fausto Bertinotti, leader of Rifondazione Comunista, appeared on television and called on people throughout Italy to join the demonstration planned for the next day.

Saturday 21 July, when 300,000 demonstrators defied the police violence and marched through Genoa, was a historic day for the European left.

The scale of the Europe-wide movement conjured up at Genoa survived even the Al Qaida attacks on New York and Washington a few weeks later. Local social forums spread through Italy in the summer and autumn of 2001.

The networks that had organised the Genoa protests went on to launch the unprecedented international movement against the “war on terror” George W Bush declared after the 9/11 attacks.

The spirit of Genoa informed the first European Social Forum (ESF) in Florence in 2002. A million people marched there to oppose the imminent Anglo-American invasion of Iraq.

It was also at Florence that the call went out for an international day of protest against the coming war. The initiative came from Italian and British activists who had first worked together in Genoa a year earlier.

The result was 15 February 2003, which saw mammoth marches in London, Rome, and the main cities of the Spanish state. It is estimated that over 35 million people took part in anti‑war protests in the early months of 2003, an unprecedented movement.

Alas, this movement did not sustain itself. Big protests continued for a while—a million people demonstrated in Rome on the first anniversary of the invasion of Iraq in March 2004. But thereafter they declined.

One factor in this decline was the dominant politics in the European anti-capitalist movement. Many of the activists who organised it had experienced the crisis of the both the revolutionary and the reformist left in the 1970s and 1980s.

Disillusioned by the experience, they subscribed to the ideology of autonomous social movements.

In other words, they believed that campaigns even on issues as broad as neoliberalism and war could and indeed should flourish without the involvement of political parties. Parties were banned from the social forums.

But in reality parties played a central role in the anti-capitalist movement. The activists of the left-reformist Rifondazione Comunista mobilised for the great march in Genoa on 21 July.

The Rifondazione leader Bertinotti was one of the heroes of Genoa. He was lionised at the Florence ESF.

A master of ambiguous rhetoric, Bertinotti from 2004 onwards led his party rightwards to the extent of participating in a pro-war centre-left government in 2006-7. This threw the social forum activists into disarray and the Italian anti-war movement—the biggest in Europe—collapsed.

The global movement was also affected by the failure of working class struggle to rise to the same level as the ideological questioning of the system that existed.

Because of the political failures of the movement, NGOs and others were able to channel protests in less radical directions.

It’s important to learn the political lessons of the movement that emerged from Genoa. But for those who shared the confusion, excitement, fear, and elation of those days in July 2001, Genoa will remain an unforgettable source of inspiration. 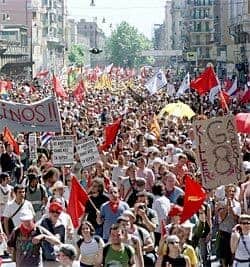 Ten years on: the bloody battle of Genoa 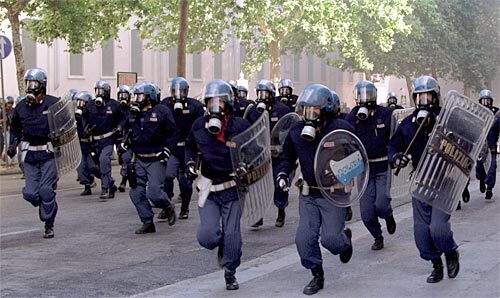 Genoa: 'The sound of the knife stays with me'

Genoa from the Socialist Worker archive