When the US fought alongside Saddam Hussein

This article is over 19 years, 3 months old
THE WARMONGERS would have us believe that Saddam Hussein is a uniquely evil dictator who they have always opposed. In fact he is the product of four decades of intervention in Iraq and the Middle East, first by both superpowers during the Cold War, and then by the US and its allies. He could not have come to power without the West.
By Kevin Ovenden
Downloading PDF. Please wait...
Saturday 12 October 2002

THE WARMONGERS would have us believe that Saddam Hussein is a uniquely evil dictator who they have always opposed. In fact he is the product of four decades of intervention in Iraq and the Middle East, first by both superpowers during the Cold War, and then by the US and its allies. He could not have come to power without the West.

And he could not have remained in power if, at key moments, the West had not thrown its weight behind his regime. Britain carved Iraq out of the Middle East in 1922 as part of its strategy to control oil. The British also imposed a king on the country. He was one of a chain of unpopular monarchs in the region who sat on their thrones thanks to the British army.

There was deep resentment across the Middle East against pro-Western rulers. That feeling extended beyond the working class, the peasantry and the poor. Middle class students, army officers and intellectuals also wanted to see Arab states build up their own economies free from Western control. In 1952 a colonel in the Egyptian army, Gamal Abdel Nasser, overthrew the British-backed monarchy. Four years later he nationalised the Suez Canal.

That prompted an attempted invasion by Britain, France and Israel. Nasser was able to withstand invasion, largely because the US decided not to back it. The humiliation of Britain and France at Nasser’s hands encouraged a wave of sympathy across the Middle East for his message of Arab solidarity and modernisation.

In Iraq the Ba’ath Party put forward a similar message. Saddam Hussein joined it in 1956. Two years later Abdul Karim Kassem, an Iraqi army officer modelling himself on Nasser, overthrew the Iraqi monarch. A million people came onto the streets of the capital, Baghdad, to celebrate. Western leaders panicked. The US believed Kassem would spearhead a move towards a string of radical nationalist regimes.

Britain landed troops in Jordan, which borders Iraq. The US sent marines to Lebanon. The Iraqi Ba’ath Party fell out with Kassem, and Saddam and other Ba’athist activists soon began cooperating with the CIA to overthrow him.

The coup against Kassem came in 1963. A CIA radio station in Kuwait broadcast the names of Communist activists, which had been gathered from Saddam Hussein among others, to the Ba’athists and army officers who toppled Kassem. The US recognised the new government within hours. A bloodbath followed as the Ba’athists and their allies butchered thousands of Communists and Kassem supporters.

The US then began flying weapons to Iraq for use against Kurdish rebels in the north. Under the new regime US companies such as Parsons, Bechtel and Mobil were given contracts and concessions.

One of the Iraqi businessmen who benefited most was Ahmad Chalabi, who is now touted by the US as a possible replacement for Saddam. But the new Ba’athist regime had little popular support. It was quickly replaced by rival army officers. A second coup in 1968, with tacit CIA support, brought the Ba’athists back to power. Saddam soon became second in command. He used his control of the Ba’athists’ paramilitary wing to eliminate opposition from all quarters. But he also sought to co-opt opponents.

So they hanged some Communist leaders, while at the same time trying to get others to back their National Patriotic Front. The repression was wrapped in the fake language of opposing imperialism. The Iraqi regime claimed to be the saviour of the Palestinians, who had been driven out of their homes by Israeli forces and after 1967 were under occupation on the West Bank and the Gaza Strip.

But when, in 1970, King Hussein of Jordan launched the murderous ‘Black September’ attack on Palestinian refugees in his country, the 15,000 Iraqi troops in Jordan at the time did not lift a finger to stop the slaughter of Palestinian fighters.

In the 1973 war between Israel and the Arab states the Iraqi regime sent the vast majority of its army to crush Kurds rather than defend the Palestinians. The main concerns of Saddam and the Ba’athist leaders were to enrich themselves, promote their allies and see off rival factions. The US and Russia both courted the Iraqi regime in the early 1970s. The US supplied the Iraqi regime with sophisticated communications equipment. But the US’s main ally in the Gulf was Iran, Iraq’s neighbour and rival. That meant the Iraqi regime tilted towards Russia, which became its main arms supplier.

The Shah of Iran and the US armed and trained Kurdish guerrillas in the Kurdish Democratic Party in 1973 to fight the Iraqi army. Then in 1975 Iraq and Iran came to an agreement over disputed access to the Gulf.

Suddenly the US and Iran cut off aid to the Kurdish Democratic Party, which soon found itself at the mercy of the Iraqi army. The Iraqi regime murdered Kurds with the utmost brutality, using MIG jets to strafe helpless people. That same year the US government allowed the Pfaulder corporation to supply Iraq with blueprints for a chemical warfare plant.

As with several other regimes at the time, such as Siad Barre’s Somalia and Mengistu’s Ethiopia, Iraq first supported one side and then the other in the Cold War. These regimes’ violence and lack of democracy worried neither Russia nor the US. Saddam became formal leader of Iraq in 1979. In that year revolution in Iran toppled the Shah, depriving the US of a key ally.

Ayatollah Khomeini’s Iran inspired a wave of anti-Western feeling across the Middle East. The US feared the Iranian Revolution would spread. It moved decisively to back Saddam Hussein against Khomeini. Iraq launched war against Iran in September 1980.

Western arms sales to Iraq soared. So did direct US military assistance. It gave the Iraqi army satellite and other intelligence pinpointing Iranian positions for poison gas attacks. Evidence of mustard gas attacks on Iranian troops emerged in the early 1980s. US president Ronald Reagan vetoed condemnation of Iraq. His defence secretary, Donald Rumsfeld, flew to Baghdad to shake hands with Saddam Hussein and the US reopened its embassy there.

That backing encouraged Saddam Hussein to use poison gas again in 1988 against Kurdish civilians. Every time Iraqi troops suffered a defeat in the war with Iran, the US upped its aid to Iraq. US warships escorted Iraqi oil tankers and assisted attacks on Iranian rigs. The US shot down an Iranian airliner. Increasingly overt US support in 1988 and 1989 forced Iran to accept an end to the war.

Saddam Hussein was now saddled with huge debts from the war. He accused Kuwait of pumping out so much oil as to depress the price and invaded in August 1990. Days before the invasion the US ambassador to Iraq had told the regime she regarded a dispute between Kuwait and Iraq as purely an ‘Arab affair’. Saddam believed he had US blessing for the invasion. But the US feared Iraq would gain overwhelming control of oil production and turned against him.

It was then that US and British newspapers suddenly discovered the massacres of the Kurds and Iraqi oppositionists. In fact the people who had protested at the time were left wingers like Jeremy Corbyn (the only MP to raise poison gas attacks on the Kurds in the Commons) and George Galloway MP (who took part in a demonstration outside the Iraqi airlines office in London).

The US and its allies, with UN cover, launched war against Iraq in 1991. They slaughtered Iraqi conscripts and civilians and then cynically betrayed the Kurds who the West claimed it was liberating. What has followed since is 11 years of sanctions and regular bombing raids, whose victims have been ordinary Iraqis rather than the regime. Now the Bush gang is determined to go to war.

It is not about putting right what they have done in the past. It is an attempt to reorder Iraq and possibly the whole Middle East by imposing regimes every bit as repressive as Saddam’s, but this time wholly committed to Western interests.

'The US only brings bombs' 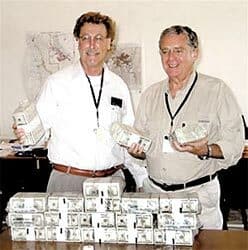 The corporate plunder of Iraq