This article is over 15 years, 8 months old
I wore the multicoloured Aymaran flag of Bolivia to the May Day march in Los Angeles, the same day that Evo Morales, the first indigenous president of Bolivia, nationalised the oil and gas fields.
By Tom Hayden, veteran US social and political activist
Downloading PDF. Please wait...
Saturday 13 May 2006

I wore the multicoloured Aymaran flag of Bolivia to the May Day march in Los Angeles, the same day that Evo Morales, the first indigenous president of Bolivia, nationalised the oil and gas fields.

It seemed right to recognise the reappearance of the indigenous in the Americas.

Contrary to most mainstream commentary, these protests were part of a continuous social movement going back many decades, even centuries. And yet the commentators, especially on the national level, once again summoned the stereotype of the lazy Mexican, the sleeping giant awakening.

In 1994, the same “sleeping giant” arose against Pete Wilson’s Proposition 187. It previously awoke in the 1968 high school “blowouts”, the 1968-9 Chicano moratorium and the farm worker boycotts, which were the largest in history. In an earlier generation, the giant awoke in the “zoot suit riots” and Ed Roybal’s winning campaign for city council. The giant never had time to sleep at all.

In the Great Depression, in the lifetimes of the parents and grandparents of today’s students, up to 600,000 Mexicans, one-third of the entire US Mexican population, many of them born in the US, were deported with their children back to Mexico, their labour no longer needed.

The fundamental issue still shaping attitudes down to the present is this – either the Mexicans (and other Latinos) are immigrants to a country called the United States or the US is a Machiavellian power that denies occupying half of Mexico for 156 years. During the 1846-8 war against Mexico, at least 50,000 Mexicans died. The fighting took place across many cities considered purebred American today. In Los Angeles, a revolt temporarily drove out the US Army.

After unilaterally annexing Texas in 1845, despite massive protests, the US president sent troops 100 miles into what previously was Mexican land.

When the Mexicans retaliated, the US declared war on the pretext that Americans had been attacked on American soil. When it ended, the US took 51 percent of Mexico’s land, including California, where the discovery of gold had been kept secret from Mexican negotiators.

Under the Treaty of Guadalupe Hidalgo, the imposed settlement of the 1846-8 war, the inhabitants of the occupied territories were granted legal, political, educational and cultural rights as citizens, not as immigrants.

Some of the earliest official documents of California were required under the treaty to be printed in Spanish and English.

This treaty, which was unenforced, became the basis for later movements stretching into the 1960s, movements that gave the Southwest an Aztec name (Aztlan) and demanded the return of former land grants.

It was not unlike Radical Reconstruction, the period after the US Civil War when General Sherman’s official promise of “40 acres and a mule” was withdrawn.

Today’s demonstrations are not demanding implementation of the Treaty of Guadalupe Hidalgo. Modern Mexican-Americans have made the legalisation of undocumented workers as US citizens their consensus demand.

But there remains an unspoken difference between two states of mind regarding the meaning of the border. In every generation, immigrant workers and youth have claimed their American rights without abandoning the memory of their deeper historical ones.

A longer version of this article appears on the ZNet website. Go to www.zmag.org/content/showarticle.cfm?ItemID=10203 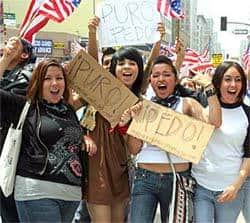 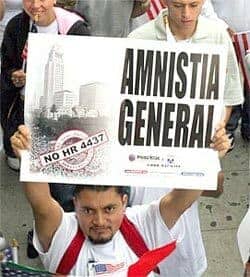