Who decides how we see Africa?

In the spring of 1993 South African photojournalist Kevin Carter was covering the famine in Sudan. While visiting a feeding station, a starving child crawling through the dust caught his eye. Behind the child stalked a large vulture.

The resulting image shocked the world. It did much to raise awareness about the plight of the Sudanese and increased the potential for non-governmental organisations (NGOs) to raise money for relief and feed the starving.

Carter won the coveted Pulitzer Prize for his picture and his career seemed to be reaching its peak — but then the recriminations started. How could he photograph the child instead of helping? How could he profit from such an appalling tragedy?

The pressure eventually took its toll and Carter, who suffered from emotional problems and drug addiction, took his own life a few months later.

The debate that Carter found himself unwittingly thrust into the centre of rages to this day. When does interest become exploitation? Where do you draw the line between news and voyeurism? Do images of starving children help the victims of famine in Africa or enforce an unfair and possibly racist stereotype?

The Guardian newspaper’s Imaging Famine exhibition explores these questions and more in considerable depth while also looking at the history of reporting starvation in the Western media.

Much of the exhibition is interactive allowing photographers, journalists and aid workers to voice their own concerns on how famine is reported.

The most powerful section is entitled The Dying Continent. This explores Western perceptions of Africa and where they come from. It is narrated by journalists Nikki van der Goog, Joseph Harker and photographer Shahidul Alam. Stereotypes are explored and the role of the media in what is little more than unintentional racism is exposed.

The idea of a wild chaotic continent wracked by poverty, drought and tribal warfare is challenged by images as well as words. A gallery of pictures show aspects of Africa seldom seen in the media. These show scenes such as a modern shopping mall in Khartoum and a young Malawian businessman talking into his mobile while shopping in a well stocked supermarket.

Shahidul Alam sums up the problem well when he says, “I think what is missing is images of people. What is shown are icons of poverty. Associated with this is the other message that it is so cheap to try and save them, in a sense also suggesting that human life, certain human lives, are cheaper than others.”

This theme is further explored in the Whose Deaths? section. This looks at the way in which the media puts a much lower price on the lives of African people than on those in the West.

Paul Lowe uses the events of 9/11 as an example to put this into context. The sudden and tragic deaths of 3,000 Americans sent shockwaves around the world.

However, 30,000 children die on this planet every day from starvation and other preventable causes — yet these go largely unreported.

It is estimated that around 3,000 people are dying every week due to the catastrophe in Darfur in Sudan, yet the region only seems to get any coverage when the United Nations makes a ruling on it.

The obvious double standards of the Western media are hardly a revelation but to see it put so plainly into context is useful and revealing.

The role of celebrities is also examined. The fact that pop stars such as Bono and Bob Geldof use their status for the good of those less fortunate is put into context. NGOs admit their increasing dependence on well meaning glitterati to publicise their campaigns. However, the fact that popular culture now seems to demand this is not properly challenged. The priorities of the media as a whole and TV in particular could have been looked at in a little more detail.

I would also like to see more scrutiny of these millionaire do-gooders who never seem to leave our screens these days.

Bob Geldof slagged off the anti-G8 protesters in Edinburgh and Genoa while also claiming that Bush and Blair’s debacle in Gleneagles was a huge step forward for the world’s poor.

Even when you forget about the positive PR for campaigns it is surely worth a mention that all the Live8 performers have seen their record sales soar since the concerts.

The photographs that make up the core of the event are heartbreaking and breathtaking. They are organised in two photo essays from Sudan by Paul Lowe and Tom Stoddard.

The images are technically brilliant and pull no punches. Some are familiar and well demonstrate the debate that Kevin Carter found himself embroiled in.

The image of an emaciated baby trying in vain to draw milk from his starving mother’s shrivelled breast is truly shocking. But is it exploitation? Does it unfairly rob the victims of their dignity or is it an important piece of truth that should be thrust into the overfed faces of the West?

These and other questions are the central theme of an exhibition that is produced by the media for the media about the media.

There is no attempt to even touch on the causes of famines or the huge injustices that lead to them. However, the relationship between journalists, photographers in particular, and the victims of starvation is excellently documented.

The exhibition succeeds in allowing those who document these disasters to have their say about the priorities and nature of the media. If you are at all interested in photography, media or the politics of starvation, then this is not to be missed.

It is well put together, excellently researched, user friendly and absolutely free. I just can’t help thinking that this is a subject that needs examining in a far wider context if ordinary people in the West are going to have their preconceptions about Africa challenged. 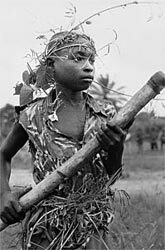 Leopold and Mobutu — colonialism and the ‘incorruptible Kodak’