THE IRAQI Federation of Trade Unions (IFTU) leadership appears to have succeeded in convincing some union leaders in Britain that it is a staunch opponent of the occupation. Alas, this self projected image is false.

Before I explain, let us bear in mind that George Bush and Tony Blair also claim they are against the occupation of Iraq and want to end it “as soon as possible”.

After all, they handed “sovereignty” to the Allawi regime, which in turn “invited” them to remain in Iraq as the “multinational forces”.

Bush and Blair are now “fully committed” to withdrawing the troops the “moment” the newly elected government in Iraq asks them to.

The “presence” of the US-led forces is merely to make sure Iraq will have free and fair elections—to withdraw the troops now “will lead to civil war”.

To legitimise this entire process the US and Britain asked the UN Security Council to pass resolutions noting the transition from invasion to occupation, then from occupation plus US-appointed “Iraqi Governing Council” to “multinational forces” assisting an “Iraqi Interim Government”.

Now we are told the big problem is cut-throat terrorists and, in order to crush them, many Iraqi cities, Shia and Sunni, have to be bombarded and thousands of homes have to be demolished on top of their inhabitants.

This “collateral damage” could go up as the free and fair election date approaches.

This is not intended to introduce an element of cynicism, but to question what people mean when they say, “We are against the occupation of Iraq,” and, “We are for a free, democratic, secular and federal Iraq,” which the IFTU says it is for.

The IFTU is NOT an elected umbrella organisation of all Iraqi trade unions. It has not even officially claimed there has been such a conference representing democratically elected bodies across Iraq.

But its leaders—including general secretary Subhi Mashadani and London-based international representative Abdullah Muhsin—have unashamedly given British and other union leaders this false impression.

The IFTU’s leadership is dominated by the Iraqi Communist Party (ICP) with the backing of the Iraqi National Accord, an organisation of former Ba’athist military and security men led by US-appointed prime minister Allawi, a former Saddamist agent in charge of all Ba’ath Party organisations in Europe.

It is impossible to understand the IFTU’s policies without recognising the ICP’s policies.

A party that was once a proud organisation with the support of millions of people in Iraq in the late 1950s and 1960s is now at the forefront of perfecting the art of justifying the continued US-led occupation.

The party’s slogan before the invasion was “No to war and no to Saddam’s dictatorship”.

The first half of the slogan was not acted upon energetically. Opposition to the invasion was tempered by some equivocal statements in the party’s main organ, Tareeq al-Sha’ab.

The party’s leaders surreptitiously took part in pre-war US and British organised conferences of some Iraqi opposition leaders, some of whom later served as collaborators appointed by the occupation authorities.

The prevarication dramatically ended a few months after the collapse of Saddam’s tyrannical regime.

The interests of the Iraqi people would have been served by bringing into sharper focus the party’s opposition to the war and the subsequent occupation.

Instead it declared on 13 July 2003 that its secretary general would join the US-appointed Iraqi Governing Council (IGC).

Though anticipated by people familiar with the party leadership’s history and manoeuvres, that statement came as a shock to some of the party members I met in Baghdad last year.

From that day onwards the party was seen by most Iraqis as a collaborationist force, with some of its leaders receiving their salaries from the occupation authorities.

Under the hammer blows of the Iraqi people’s magnificent struggle against the occupation, the IGC and its US master, Paul Bremer, were so isolated and discredited that he had to disband the IGC last June in favour of passing “sovereignty” to the US-appointed Iraqi Interim Government led by CIA asset Iyad Allawi.

The ICP fully supported the formation of Allawi’s puppet regime, and has one senior and two junior ministers serving it.

US ambassador John Negroponte—the mastermind of terror organisations in El Salvador, Honduras and Nicaragua—is now bunkered at Saddam’s Republican Palace and is the real political ruler of Iraq.

He is working hard to build an Iraqi force to kill other Iraqis and subdue the people using Saddamist methods. So where does the IFTU stand on all this?

Reading the headlines on the IFTU’s website, you would be forgiven for thinking there was no war or invasion of Iraq and tens of thousands of people did not die at the hands of the US-led occupation.

Nor would you think there has been a US bombardment of Najaf, the working class districts of Baghdad—particularly Sadr City—Fallujah, Samarra and many other cities in the past weeks and months.

The IFTU rightly condemns the atrocities committed by a handful of terrorist gangs, such as the kidnappers of Ken Bigley. But they always do so in the manner of Bush, Blair and Allawi.

The IFTU always try to portray the hugely popular patriotic resistance as “remnants of the Saddam regime” and “secretive anti-democratic” forces.

On the other hand, the IFTU and the ICP are yet to launch a campaign against the massacres committed by the occupation forces.

Associating the popular resistance with terrorist gangs is one of the most insidious acts of the IFTU and the ICP.

They dare not condemn the resistance openly, in Arabic within Iraq, but they always issue statements in the wake of terrorist crimes trying to suggest that Zarqawi and the other terrorists are the resistance in Iraq.

As it happens, the vast majority of Iraqis reject Zarqawi and his ilk—as do the armed resistance and its supporters in Fallujah, Basra, Najaf, Sadr City and across Iraq.

Many even suspect that the occupation forces are somehow encouraging the likes of Zarqawi, or at least failing to prevent their crimes, as a way of obscuring the fact that most Iraqis now actively support a patriotic resistance movement.

Does the IFTU mention anywhere that the occupation forces have admitted the attacks on them by the resistance rose in August to 2,700?

Does it mention exactly how many of these 2,700 attacks a month were claimed by Zarqawi? Only six. Six headline-grabbing, TV-dominating, stomach-churning moments.

The mildest, and furtively stated, criticisms are reserved for the US bombardment of the cities. “Bombing cities in which civilians die is not the way to defeat the terrorists” is the best condemnation we can hope for of US-led war crimes.

The IFTU and ICP assisted “war on terrorism” is nothing but a new deceitful attempt to wage a new war against the Iraqi people, in the interest of the Bush administration and the neo-cons, and to multiply the profits of the transnational companies.

So what does the IFTU stand for in Iraq today?

On the front page of the English version of their website is a picture of the leaders of the IFTU seated under an IFTU banner.

The words on the banner sum up the IFTU’s main demands for Iraq and its working class:

“The General Federation of Workers’ Trade Unions in Iraq [this is the full and accurate translation of the IFTU’s name] struggles for: 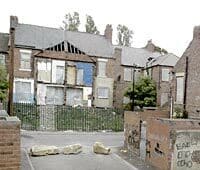