This article is over 6 years, 5 months old
On the 75th anniversary of the assassination of the Russian revolutionary Leon Trotsky, Sue Caldwell asks if his ideas can help activists fighting for another world today
Downloading PDF. Please wait...
Tuesday 18 August 2015 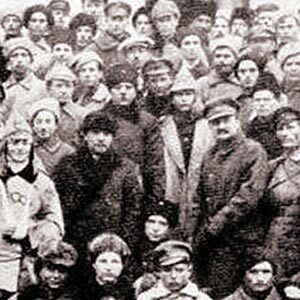 Lenin and Trotsky with soldiers in Pertrograd, 1921

Austerity, war and oppression  are radicalising thousands of people who want a different society.

But it has also thrown open a debate about how we fight for it.

Do we need a revolution or can we reform capitalism? Would a revolution inevitably end with the horrors of 20th century Russia? Is it possible to trust the “reformist” Labour Party and trade union leaders, and can revolutionaries work with them?

The Russian revolutionary Leon Trotsky took on all of these questions. But he wasn’t just an intellectual.

Trotsky was a revolutionary activist whose writings addressed political questions that were thrown up during struggles of the early 20th century.

He fought the most feared forces of the Tsar, Russia’s dictator, until the 1917 Russian Revolution. In the civil war that followed, Trotsky led the Red Army to victory.

He argued for socialist revolution and was willing to challenge orthodox theory to further that fight.

The common belief among Marxists was that socialist revolution could only happen in the Western developed countries.

More backward countries, such as Russia, would need a “bourgeois revolution” first so capitalism could develop.

This would replace the Tsar with a parliamentary democracy and allow capitalist firms to flourish and push out the old feudal ways. Only then would Russia be ready for socialist revolution.

Trotsky argued against this and developed his “theory of permanent revolution”.

He insisted that Russia couldn’t be seen in isolation from global capitalism.

Russian capitalist firms were late to develop, but they had learned and copied from their more advanced rivals.

He called this “uneven and combined development”. While the Russian peasantry was bigger than the working class, thousands of workers toiled in giant factories in Moscow and Petrograd.

This meant that those workers had enormous power. The peasantry was atomised and difficult to organise. Workers, said Trotsky, were the only force that could bring down the Tsar.

But having tasted their power, workers wouldn’t want to give it up. This meant that they could take the revolution further and form a socialist government, based on workers’ councils.

The two revolutions of 1917 proved Trotsky’s thoery.The Tsar was overthrown and replaced by a government in February.

Then another revolution in October, led by Russian revolutionary Vladimir Lenin’s Bolshevik party, brought the working class to power. 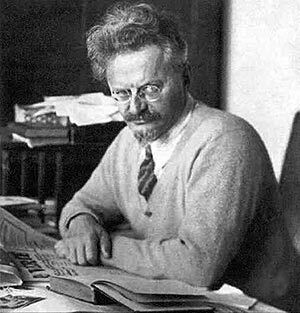 During the revolution Trotsky led the St Petersburg workers’ council and was also the key organiser of the October insurrection.

He writes brilliantly about these events in his book The History of the Russian Revolution, a treasure trove of revolutionary strategy and tactics.

Trotsky’s theory is still important today. Capitalism has spread across the globe, but there are still more backward societies.

During the Arab Spring most people argued that the revolutions could replace the dictatorships with liberal democracies.

Revolutionary socialists rightly argued that Egypt’s large working class would be the decisive force in bringing down the dictator Hosni Mubarak.

But it didn’t have to end there. Through bringing down Mubarak, there was potential for workers to take the revolution further in a socialist direction.

Trotsky also understood that the success of the Russian Revolution was tied to it spreading across Europe.

He was a leading figure in the Communist International, which brought together new Communist parties across the world fighting for revolution.

But the revolutions in Europe, namely in Germany, failed because there wasn’t a large enough independent revolutionary leadership.

The majority of workers in Western Europe looked to mass reformist parties to bring change through parliament.

Trotsky developed a wealth of strategy and tactics to help revolutionary parties grow when the majority of workers still look to “reformism”.

His most important contribution was the “united front”.

Revolutionaries have got to organise independently of reformists to be effective.

But in order to win workers to revolutionary ideas, revolutionaries also have to fight alongside reformists in day to day struggles.

He argued that “any party which mechanically counterposes itself to this need of the working class for unity in action will unfailingly be condemned in the minds of the workers”.

Nowhere was the need for the united front more urgent than to face the rise of the Nazis in Germany.

Trotsky berated the German Communist Party (KPD) for its complacency. He warned that “should fascism come to power it will ride over your skulls and spines like a terrific tank”.

Trotsky argued that the fascists wanted to crush both reformist and revolutionary organisations.

But the KPD had become a tool of Stalin’s imperialist foreign policy and followed its twists and turns. Stalin partly feared that a revolution in Germany would expose his counter-revolution in Russia.

The Communists denounced the Labour-type Social Democrats as “social fascists” and refused to unite with them against Hitler.

While the KPD refused to work with workers who looked to the Social Democrats, it still had significant influence in the working class.

Trotsky’s allies were in tiny and isolated organisations.

In Britain we’ve managed to hold back the fascists.

In the 1970s and 1990s the Anti Nazi League first pushed back the National Front and then the British National Party (BNP). More recently, Unite Against Fascism has humilitated the BNP and the English Defence League (EDL).

This was done by revolutionaries working in a united front with reformists from the Labour Party, Muslim groups and many others.

Trotsky’s writings on the united front aren’t just useful when it comes to fighting fascism. His writings on the General Strike of 1926 in Britain grapple with how revolutionaries should deal with the Labour Party and trade union leaders.

Their betrayals meant the strike went down to defeat—and the Communist Party mistakenly argued for power to be handed to the TUC rather than workers.

Trotsky argued against the treachery of the Labour Party and union leaders and for “the ruthless exposure of the reformists’ illusions”.

It’s never easy to get the correct balance right between working with and against reformists and their leaders.

Revolutionaries have to stand with them to defend working class organisation against the bosses and fascists.

But it’s also crucial that revolutionaries argue against them sowing illusions in reformism and build a revolutionary alternative.

For example, we welcome left reformist parties such as Syriza, Podemos and the momentum around the Jeremy Corbyn campaign.

These can push politics to the left. But only the working class has the power to transform society.

Revolutionaries today should build on Trotsky’s work—but we should also challenge orthodoxy.

Trotsky had many strengths but also some serious weaknesses.

He lambasted Stalin as the “gravedigger of the revolution”.Yet he continued to believe that the Soviet Union was still a workers’ state, but with a parasitic clique on top that workers had to topple.

When Eastern Europe fell under the Soviet Union’s domination, many of Trotsky’s followers argued those states were also workers’ states with the same parasitic cliques.

But there had never been a succesful workers’ revolution in Eastern Europe. If Trotsky’s followers were right then socialism wasn’t necessarily about workers freeing themselves through a revolution.

In fact, Russia had become a “state capitalist” regime, with a ruling class that exploited workers just like bosses do.

Trotsky didn’t live to see this situation develop. But we can still use and develop the insights in his writings to further the struggle for socialism today.

The need for working class revolution to change society is as necessary today as it was in Trotsky’s day.