This article is over 16 years, 7 months old
Stefan Bornost examines the success of the Left Party in the German elections
Downloading PDF. Please wait...
Saturday 01 October 2005

The election in Germany has plunged the political establishment into crisis and has led to the biggest breakthrough of a radical left force since the Second World War. Gerhard Schröder’s SPD, similar to Britain’s New Labour, stood with a programme defending hated measures to attack the welfare state — Agenda 2010 and Hartz IV. The Tory CDU and its would-be coalition partners, the FDP, had programmes saying they would implement even harsher neo-liberal measures.

The only reason why the SPD did not suffer the catastrophe the polls predicted three months ago is that they changed the way they presented themselves in the course of the campaign.

Their rhetoric was, in effect, campaigning against everything they themselves had done in government over the previous seven years. The SPD’s turnaround was prompted by the emergence of a force that ended up being the biggest winner in the election — the Left Party.

The election showed something deeper about German society. The general picture is that the higher the unemployment, the poorer the population and the more densely populated the area, the more votes the SPD and the Left Party got.

One fifth of the nearly five million unemployed voted Left Party — that’s averaged across East and West. Among the poorest third of the electorate, again one fifth voted for the Left Party.

These trends show how the deep disaffection with neo-liberalism is finding a political expression.

The Left Party is an organised agreement between two elements — the WASG, itself a new left force in the West, and the PDS, the former Communist Party in the East. The more dynamic element is the WASG.

Since the Second World War the SPD has exerted hegemony over the German working class movement, especially in the trade unions. There was no force to the left of the SPD in the unions. But campaigns against attacks on the welfare state and neo-liberalism have created an atmosphere in which trade unionists felt the need to break with the SPD and establish the WASG.

Oskar Lafontaine, the former left SPD leader who is now a key figure in the Left Party, has acknowledged the importance of the WASG. His first words at the celebration party on election night were, “Thank you to the founders of the WASG, you got the ball rolling.”

The WASG represents a force that still identifies with what they take to be the traditional SPD, but they are in direct opposition to what Schröder had done to the party.

In the two biggest unions, IG Metall and Verdi, one fifth of the full-timers sympathise with the new Left Party. The economics department of Verdi effectively drew the programme of the WASG.

The PDS has been around longer. It is the successor party to the SED, which ran the East German state. But the SED lost 95 percent of its members in the early 1990s so the political character of the PDS is not that of an old state party, because that state apparatus has gone.

Now the PDS is a party with a social democratic outlook and programme. It is very strong in the East, but has never managed to reach out into the West. There are two reasons for this. The first is the image inherited from the SED.

The second, deeper problem has to do with the class basis of the PDS. The SED was mainly the party of the public sector bureaucracy, with a weak implantation inside the working class. The PDS has inherited that problem.

Its roots in the working class and the trade unions are very weak. Only 14 percent of the party’s membership are employed workers. Over 60 percent of members are pensioners. Of course they are largely working class pensioners, but they are by definition not rooted in the unions and big workplaces. And the number of small businessmen in the party equals the number of employed workers.

This is one of the reasons that the PDS has difficulty in appealing to workers. It often has a political outlook, as a strong regional party, which accommodates to small business and a sort of Eastern populist policy.

That outlook led them to join the SPD in government across regional administrations in the East.

They have done so in Berlin and in Mecklenburg Vorpomern. In Berlin, especially, this has led to very bad compromises with the drive towards neo-liberal politics.

A major bank in Berlin went bust and the SPD/PDS city authority voted to take on the debts of the bank and make vicious cuts to pay for it. So city transport workers, for example, face a 15 percent pay cut.

The result, until this spring, was that the PDS was losing members and support. However its youth section is much more militant and connected with the movements than the traditional PDS.

There is a strong yearning to have a united left force across Germany. We need to have a united force. But at the same time the fusion of the WASG and PDS must not happen before we have a debate on policy and politics.

Linksruck would like to see a process where we discuss over one or two years questions such as whether it is right to participate in the city government in Berlin. There are other forces that want to push for a rapid fusion.

It would be a mistake not to seize the chance to create a new left that answers questions such as why the social democrats have failed in government over the last seven years.

What is it about the power of big corporations that allows them to bring governments to heel?

How can we use parliament as a platform to speak for the people and to create an extra parliamentary opposition, without falling into the trap of trying to make social cuts more social?

This debate is not between a WASG bloc and a PDS bloc, but criss-crosses through both.

For example, the feeling among many trade unionists in the WASG is to go back to the policies of the SPD in the late 1960s and early 1970s. But the reason the SPD departed from those policies is that they failed.

So we have to answer the question of how we do better than going back to the politics of a time that did not deliver for working class people.

There are high expectations of the Left Party. Between 100 and 150 were joining the WASG each week before the election. It had 5,000 members in May and has 12,000 now.

Ulrich Maurer, who was the head of the SPD parliamentary fraction in Baden Württemberg a few years ago, is now in the national parliament for the Left Party.

The main spokesperson for the SPD left in the 1970s has joined. This success means the Left Party can have an influence on national politics.

Many people are getting angry that the election result is not being taken seriously by the main parties.

Instead of the party leaders saying the result shows clear problems for their policies, they claim they won support for their neo-liberal programmes.

The deputies of the WASG inside the 54-strong parliamentary fraction of the Left Party have done something very good in this situation. They’ve said, “OK Schröder, you want to govern as chancellor.

“For us it’s a question of politics. If you scrap the cuts packages, get the troops out of Afghanistan and increase taxes on the rich, then we will be prepared to give our votes in parliament to support the formation of a minority government of the SPD and Greens led by you.

“We will then judge each vote as it comes and we will not bring down the government if it sticks by the broad break from neo-liberalism that people showed they wanted in the election.”

This approach has brought the Left Party into the national debate over who should now govern the country. And it forces Schröder to say how serious he is about his rhetoric during the election about social justice.

This has had a reaction inside the SPD. One of the party’s remaining senior left wing MPs said Schröder should take up the Left Party’s proposal.

One of the left wing Greens said they should do it. The left of the Greens is horrified at the notion that the party could go into coalition with the CDU and the free market Liberals.

But the most likely outcome of the political stalemate is a grand coalition of the SPD and the CDU.

Whether that happens or not, the Left Party is very well placed to exert leverage. The election result has already spurred on the drive for planned mobilisations against the cuts.

A conference was called before the election for November. The trade unionists and the anti-globalisation activists who called that conference now feel they have the wind in their sails.

It is a big breakthrough that such activists recognise the connection between the social struggle and its expression through a political party.

One thing stands out at the same time, however. The bosses are saying they are not going to retreat from the drive to make working class people pay for the economic crisis.

So the deep social crisis is going to continue and there will be an assault on living standards, whatever happens in the negotiations to form a coalition.

Stefan Bornost is the editor of Linksruck, Socialist Worker’s sister paper in Germany. Go to www.linksruck.de (in German) 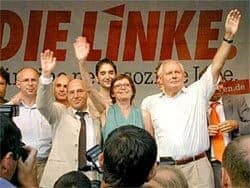 Winners and losers in Germany’s election