Will sexism survive a socialist revolution?

This article is over 12 years, 3 months old
In her final column on women's liberation, Estelle Cooch looks at how revolutions can end all oppression
Downloading PDF. Please wait...
Tuesday 13 October 2009

According to the gospel of Jeremy Clarkson (bear with me on this), if anyone calls him sexist he would, “grab you by the epiglottis and bash the back of your head repeatedly into the pavement”.

Well Jeremy, I’m just going to say it. I think you are sexist.

The sexism embodied by individuals like Clarkson and the structures of the state continues – despite the gains that women have made.

This has led many women to question the system and to see their oppression as part and parcel of capitalism.

But many also ask if an end to capitalism necessarily means an end to sexism.

Surely, they say, there will still be rapists or sexual harassment after the revolution?

Even if there are communal nurseries and kitchens surely it will be women who will end up cooking and caring for other children?

In reality there is no reason for this to be the case.

This view misinterprets both the roots of women’s oppression, and the very nature of revolution – what the Russian revolutionary Vladimir Lenin called a “festival of the oppressed”.

The act of struggle will lead millions of women to realise their potential – and millions of men to see women not as sex objects but as working class fighters that they need to struggle alongside.

The experience of any struggle, big or small, changes people’s ideas and gives them a different way of looking at the world.

But the process of revolution – and of working together to create a new kind of society – transforms people.

That’s not to say that women’s oppression would vanish immediately after revolution.

It wouldn’t – because women’s oppression has existed for thousands of years and concerns the most emotional and intimate aspects of our lives.

But a socialist revolution would not only transform the people making it.

It would also destroy the structures that perpetuate oppression.

In 1917 during the Russian Revolution the Bolshevik Party recognised the inextricable link between class society and women’s oppression.

After the revolution Russia became one of the first countries to give women the vote and make both abortion and divorce available on demand – which is still not available in Britain today.

The soviets, or workers’ councils, that ran the country set up communal dining halls, laundries, nurseries and literacy programmes to help free women from the isolation and drudgery of the home.

The struggle for women’s liberation progressed far further and far faster during the Russian Revolution than it has through legislation since.

Over the past century the myths and stereotypes surrounding different oppressions, be it sexism, racism or homophobia, have been proven false again and again.

And yet sexism has re-emerged in the form of “raunch culture”.

We are now told lap dancing and pornography empower women, yet at the same time face attacks on a woman’s right to choose to have an abortion.

We have a disgraceful media representation of women – what one author called the “rise of the stupid girl” – where women are encouraged to feign stupidity to gain acceptance.

A socialist revolution would challenge the roots of women’s oppression and make such ideas seem ludicrous.

The media under socialism would not reflect women’s oppression in society.

While individual male chauvinists may exist in the short-term, it would not be the respectable currency of society.

Sexism has not existed since time immemorial.

If this is the case then there is no reason why it has to exist in the future.

The history of fighting for liberation is not one of steady progress.

Rather it is a history that shows that the biggest gains come when ordinary men and women take to the streets to demand change and challenge the structures that keep oppression in place.

Today, as we face a backlash against the gains that women have won, we have to be part of a mass movement that has the power to do this again.

The rising women's liberation movement in the radical 1960s 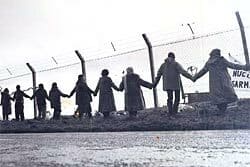 The struggles and retreats of the 1980s 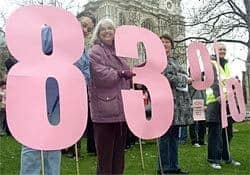 Does the blame for sexism lie with men?

Do women need to organise separately?